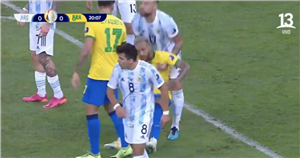 Brazil superstar Neymar found himself on the floor and whinging to the referee about the physicality of the Argentina team during the first-half of Saturday night's crunch clash.

But former Man City defender Otamendi had no time to hang around to wait for Neymar to get back to his feet.

Instead, he just hoisted his arms under both of Neymar's arms and launched him back up right.

The move happened in less than a second – and Neymar didn't even bat an eyelid.

Instead, the PSG forward continued his protestations to the referee and did not once turn round to Otamendi.

Otamendi, who now plies his trade for Benfica, also continued with no fuss and just barked some instructions at his team-mates.

Brazil and Argentina are two of the biggest rivals in international football – and the feisty side of the game was shown a few minutes later.

Unexpectedly, however, it was Lionel Messi who was flying into a tackle.

Is Neymar one of the top 10 footballers in the world right now? Let us know in the comments section.

Messi, regarded by many as the greatest player on the planet, is not particularly known for his tackling.

But his desire to win the Copa America this summer was showcased when he lunged into a tackle on Paqueta – and came away with the ball.

Messi came into the Copa America final having never won a major tournament with Argentina and has long been desperate to put it right.

The forward, who is currently a free agent after his Barcelona contract expired, saw an opportunity to pounce as Paqueta kept the ball from Angel Di Maria.

Running in from 10 yards away, Messi lunged into the tackle, but did so fairly.

As both Paqueta and Di Maria were left sprawled on the floor, Messi jumped up with the ball at his feet, creating a golden chance for Argentina to build an attack.