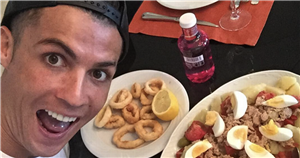 Patrice Evra has described a side of Cristiano Ronaldo that Manchester United supporters might not get to see, while joking that they once shared one of the most boring lunches of his life.

Ronaldo, 36, is back at Old Trafford following spells with Real Madrid and Juventus, and has already provided some stunning moments despite their poor results of late.

Former United stalwart Evra, played alongside the five-time Ballon d'Or winner on 121 separate occasions between 2006 and 2009, a period in which they formed a close bond off the pitch.

Evra has now been asked about Ronaldo's personality away from the cameras, and described how he didn't put on a large selection of foods during a shared lunch.

Evra told talkSPORT: "Cristiano, first of all, as a person and human being, is so generous, so nice and people don't see that face. But he is a winner. He is addicted.

"For example, when we had training at 10am, Cristiano was already there for 8am. When we had finished training, he was still on the pitch practicing.

"When he invited me for lunch… don't ever go for lunch, because you are going to have one of the most boring lunches at Cristiano's; it is salad, plain chicken and water. There isn't even fizzy water.

Is Ronaldo the greatest player of all time? Tell us in the comments section

"After that, we went into the garden, trained for a little bit, went swimming, went to the sauna and at one point I looked at him and said: 'Bro, we have just finished a training session, why do we have to a second training session?'"

Evra's memory comes after United stopper Lee Grant described the actions of the playing squad while eating following the return of Ronaldo in the summer.

Grant told talkSPORT: "To give you one instance of the impact he is having on the group, this was Friday night in the hotel.

"So, as you guys will be aware, you finish your dinner and usually on a Friday night you've got some cheat stuff out. You've got some apple crumble and custard or you've got a bit of brownie and cream.

"One of the lads said to me, 'What has Cristiano got on his plate?' Obviously it is the cleanest, most healthy plate you can imagine."