Home » Pele was always about more than football

hen Pele came back into the Azteca dressing room after the 1970 World Cup final, he did something that didn’t seem to fit with the feeling from the crowning glory of his entire life. His own feeling was coming from almost the opposite perspective.

When Pele watches footage of that day in the new Netflix documentary about his life, he starts to cry, but the tears do not seem sentimental. They seem sad, as if reflecting a more complicated reality that the film had been exploring.

That was the immense political pressure Pele was under. The documentary makes clear that he did not want to play in that World Cup. It is indicated that the country’s military dictatorship – then in power for six years – didn’t just instruct him to play. They demanded victory.

That would naturally lend a bittersweet feeling to your greatest glory, to say the least.

“I think the biggest gift you receive in victory isn’t the trophy,” Pele says. “It’s the relief.” His sister Maria Lucia argues it was “the victory he wanted to leave as his legacy”. What that represents is a bit harder to say.

The documentary will prompt a lot of renewed discussion about Pele’s wider legacy but, as with the Asif Kapadia Diego Maradona film, it is about so much more than its subject. While that documentary was about addiction, and dealing with intense fame, this is really about the political use of sport.

It is what shapes the narrative arc of the film, and is put forward as responsible for the juncture moment – and crisis – of Pele’s football life.

Footage of Pele scoring goals is then interspersed with images of state violence.

That should indicate this is no hagiography. Nor is it any kind of argument about his standing, in the way that ‘The Last Dance’ was purported to be for Michael Jordan.

The mere fact it will put Pele back into the public consciousness will naturally prompt renewed debate about ‘the greatest of all time’, too, but won’t come any closer to answering it.

That’s because there is no answer. It is debate that comes down to entirely subjective preference of admittedly objective claims.

The film does remind us why Pele has such a strong claim, and why his name was a by-word for football brilliance long before Maradona or Lionel Messi. There probably hasn’t been a performer in the World Cup like him. You could even say he is the competition’s defining player.

He remains the only one in history with three World Cup medals. The manner of them only adds to the worth.

For the first of those, in 1958, a 17-year-old Pele was a revelation. All of his six goals came in the knockout rounds, where he scored the winner against Wales in the quarter-final, a hat-trick against France in the semi-final, and two against hosts Sweden in the final. Talk about clutch. The pressure of the stages also paled next to the pressure of the tournament. Brazil had still never won a World Cup at that point, but carried all manner of neuroses and complexes about the competition due to the failure at home to Uruguay in 1950. A youthful Pele, just as he promised his crying father eight years earlier, blew all that away. It was the type of goal-laden dominant campaign from an outstanding star that actually became unseen in the modern era.

Politician Benedita Da Silva says “he was the most inspiring image that we’d ever had of a poor black boy”.

For the second in 1962, Pele got injured in the group stage, which sets the primary tension of his career and the film. Having been kicked out of two successive World Cups as Catenaccio and cynical play began to take hold of football, he didn’t want to go back after 1966.

This was unacceptable for the military dictatorship, who had made winning the great trophy a “government issue”. As with Argentina 1978, they knew the propaganda benefits of sporting glory.

Pele had at that point already been declared “a national treasure”, meaning he was legally prohibited from leaving Brazil to play in Europe. He still destroyed the best Europe had to offer when Santos played them in the Intercontinental Cup. Most memorable was the nutmeg of Eusebio as he scored a hat-trick in the 5-2 evisceration of Benfica, for a game seen as confirming who the true king was. Some of the defending was admittedly lax.

There are times when footage of pre-1970s football makes it feel quaint, and basic. Pele’s career did cover the entirety of the game’s initial modernisation. He traversed the introduction of systemised defences and “pragmatic” football in the mid-1960s, which was what brought him such pain, mental as well as physical.

It also made some of his feats all the greater.

There is little sense of Pele being a more basic player. The speed and control with which he plays makes him look like a star out of 2021. That is not to damn him with faint praise. It is a basic truth that Pele’s inherent ability would have been improved by modern coaching and sports science. It emphasises his transcendent brilliance that he still looks so modern without it.

This is why he was so adored. The film does portray the circus constantly surrounding him, as the dictatorship attempted to use him for their version of bread and circuses.

This was the intense pressure he was under for 1970. Pele responded by rising to a level that set the standard for World Cup performances, orchestrating the brilliance of maybe the competition’s greatest ever team.

The peak was that ball for Carlos Alberto in the crowning moment. It seemed so simple, but was really a piece of extraordinary perception, precision and timing. From the very corner of his vision, Pele played a pass that was perfect for the right-back to run onto at full pace and power the ball into the bottom corner. 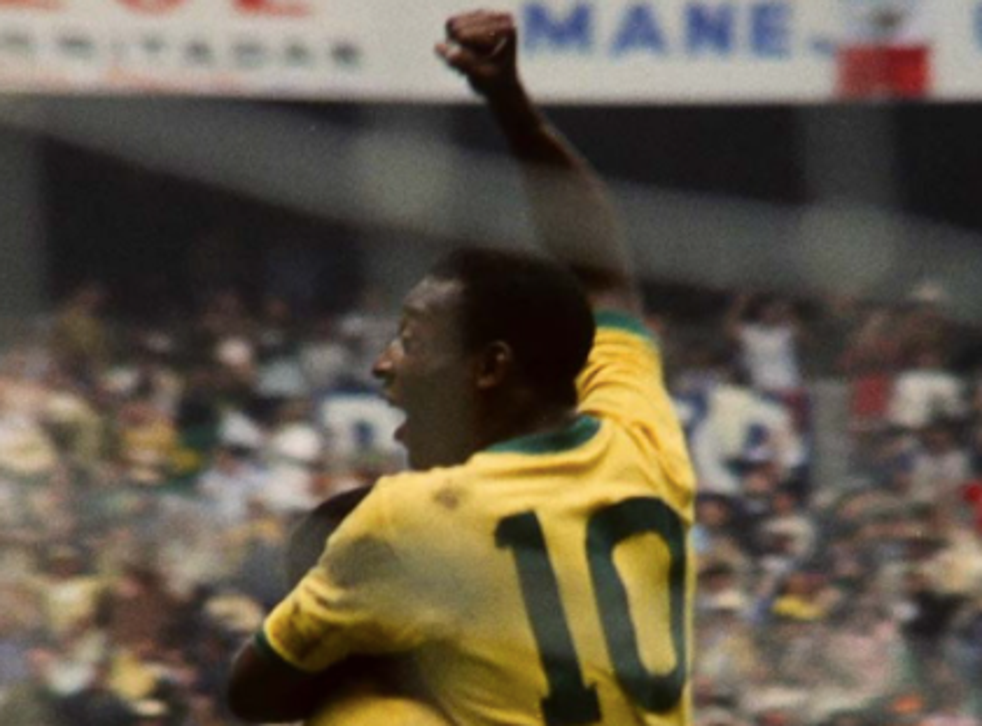 The fact this was the first World Cup in technicolor added a fitting aura to his greatness, but now only serves to emphasise how far back in time it was.

That isn’t the only reason that Pele has receded from debates about the greatest of all time, however.

Put bluntly, Maradona made him seem unfashionable, and uncool. This was sometimes very direct, as they engaged in very public spats.

The film doesn’t touch on that second life, of so many sponsorships and questionable predictions depending on his audience, or the financial exploitation of the 1960s that probably led to much of that.

It instead only really covers 1957 to 1970, and the more complicated question of whether he was a political pawn.

Institutional Act Number 5, which allowed anyone to be arrested without due cause, also allowed General Medici to become “the cruellest dictator Brazil ever had”. It is shown how he used football to cultivate a “nice guy” image, as people were being tortured and disappeared. Fascist imagery and slogans surrounded the 1970 team. The technical staff was filled with government personnel. Pele is regularly shown meeting Medici. He is pictured hugging him after the eventual victory.

Pele is questioned on this, but essentially pleads innocence, merely saying his door was open to anyone.

Jose Trajano, a journalist who covered the 1970 World Cup, outlines the insidiousness of all this.

“I was against the dictatorship. I went there to cheer against my country. We imagined that if Brazil won the World Cup, it would bolster the dictatorship, and none of us wanted that. But when it comes to football, the heart rules the head. You forget your principles once the ball starts rolling. Once we were there, it was impossible not to get behind the team.”

Teammate Paulo Cesar Lima is meanwhile the most excoriating.

“It’s one of the criticisms I hold against him to this day, because one single statement could have gone a long way in Brazil.”

This is the crux. An unfavourable comparison is even made with Muhammad Ali, who famously sacrificed his world title and almost his career to resist the draft for Vietnam.

Juca Kfouri, a journalist and friend of Pele, argues that Ali ran no risk of being tortured. “Pele had no assurance of that.”

Pele attempts to rationalise all this.

“I’m totally convinced I helped Brazil a lot more with my football, with my way of being, than the politicians whose very job it is to do this thing,” he argues.

“The 1970 World Cup was the best time of my life, but it was more important for the country, because if Brazil had lost in ’70 everything could have become worse. The whole country could take a break when we became champions – 1970 definitely did more for Brazil than it did for football, without doubt.”

Like his career, it was about so much more than glory, or bright technicolor happiness.

Pele is on Netflix from 23 February