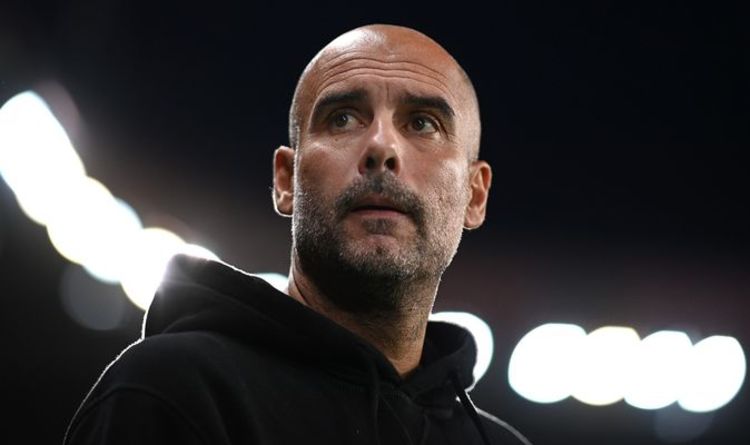 Pep Guardiola declared that he was ‘so happy’ for Lionel Messi before showering Marco Verratti with special praise after Paris Saint-Germain defeated his Manchester City side on Tuesday evening. Idrissa Gueye opened the scoring with an early strike for the French giants before Messi’s stunning late goal rubber-stamped the points in style at the Parc des Princes.

City came close to finding the back of the net through Raheem Sterling, who rattled the crossbar on 25 minutes before Bernardo Silva failed to turn home the rebound.

The Premier League champions huffed and puffed but were unable to get on the scoresheet, with Messi’s thumping finish from outside the box killing the game with 11 minutes left to play.

The result sees PSG top Group A ahead of Club Brugge on goal difference, with City slipping to third in the order after suffering their first Champions League group stage defeat in three years.

Messi was yet to score for his new club before kick-off on Tuesday, but the six-time Ballon d’Or winner opened his account in style with a near-perfect strike at a crucial point in the match to leave City empty-handed.

Guardiola paid tribute to his former Barcelona player after the full-time whistle, but opted to single out Verratti’s influence on proceedings after the diminuitive playmaker’s excellent showing in the middle of the park.

JUST IN: Liverpool boss Jurgen Klopp fearful that Man City will ‘strike back’

“If Messi is happy in Paris, I will be so happy for Leo,” the City boss told RMC Sport.

“And let me say I’m in love with Marco Verratti. He is an exceptional player.

“He is small… but you can always count on him. I’m happy he’s back from injury.”

Verratti completed 93 per cent of his passes against City, managed 66 touches and made five successful dribbles during his 77 minutes on the pitch in the French capital.

He played an influential role in helping Italy to win Euro 2020 over the summer and looks to have started well for PSG upon his return from a troublesome knee injury.

However, it was undoubtedly Messi that stole the show with his incredible late goal to seal an impressive result for the Ligue 1 heavyweights in front of a vocal home crowd.

Guardiola also gave credit to his City players despite failing to put the ball in the back of the net against PSG, with the Spaniard insisting that he was not too worried about the performance.

“It was a good performance, we did everything we could but score. We controlled them, unfortunately we couldn’t score but my biggest compliment for the team.

City will now switch their focus to the Premier League and their upcoming trip to Anfield to face Liverpool in a mouthwatering top-of-the-table clash.