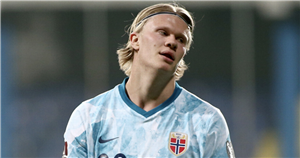 The Norway international was photographed in a City shirt as a youngster due to his father, Alf-Inge, having a three-year spell at the club between 2000 and 2003.

Despite that, agent Mino Raiola will no doubt be looking for the best financial deal possible for the 20-year-old as he continues to shine in the German Bundesliga.

Guardiola, who will wave goodbye to City legend Sergio Aguero this summer, has now detailed three reasons why Haaland will not be on his way to the Etihad this summer.

When asked about a potential move for Haaland, Guardiola said: "With the prices we are not going to buy any strikers, it is impossible, we can not afford it.

“All the clubs are struggling financially, us as well.“

Those comments question how any club might be able to afford the demands of Raiola this summer, with Real Madrid and Barcelona already taking part in talks with the superagent.

The former Barcelona and Bayern Munich boss looks almost certain to lead his side to the title without the goals of Aguero this season, and he thinks that leaves them in a comfortable position.

The Spaniard also felt the need to name those who can step up in a central role next season should they fail to replace Aguero at the culmination of his contract.

He said: “We have Gabriel [Jesus], Ferran [Torres] who has been incredible.”

Adding of Liam Delap while talking about Elite Development Squad head coach Enzo Maresca: "Many players are training with us and Liam is doing really well, we are in touch with Enzo and how they are doing.

Additionally, there is never a guarantee that Guardiola will play with a leading striker during any City fixture, with the powerful Haaland rather different to their usual options.

The boss continued when talking about his other forward options: “Raheem as a false-9. Today there is more chance we don't sign a striker.”

Toure and Guardiola's history makes comments on Europe no surprise