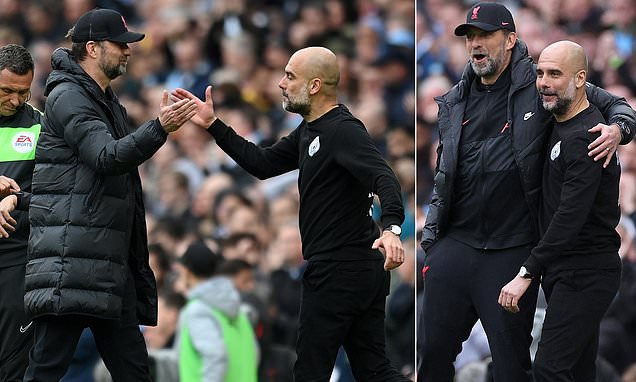 ‘He makes me a better manager… we will have dinner one day in the hall of fame’: Pep Guardiola insists he respects Jurgen Klopp ‘a lot’ after their title-chasing sides played out entertaining 2-2 draw

Pep Guardiola had nothing but good things to say about title rival Jurgen Klopp after their sides played out a thrilling 2-2 draw in the Premier League on Sunday afternoon.

City twice led on the day, through Kevin De Bruyne and Gabriel Jesus, but Liverpool responded through Diogo Jota and Sadio Mane.

Speaking about Klopp after the game, Guardiola said: ‘I don’t know if Jurgen respect me but I respect him a lot,’ said Guardiola. ‘He makes me a better manager… his teams are positive, aggressive and they want to attack. I try to imitate him. 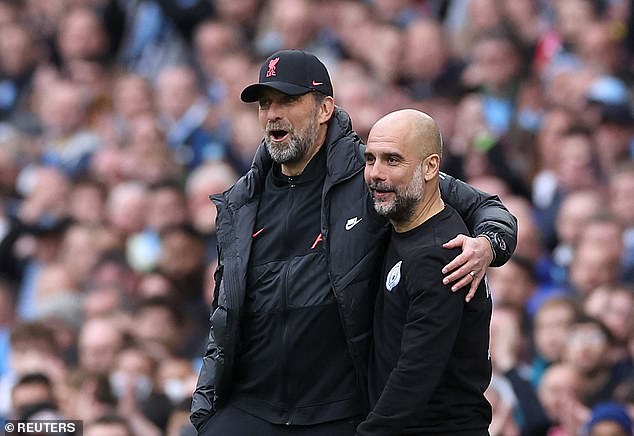 ‘We aren’t friends, we don’t have dinner together, we will have dinner one day in the hall of fame, I have his telephone number but I don’t call him. I have a lot of respect for him and he knows next Saturday, we’ll try to beat him.’

On City’s run in, Guardiola added: ‘Seven games in the Premier League is a lot of points, we have to play away, they have to but I had a feeling we’ll behave. I don’t know what’s going to happen. The way we performed against a team that I admire a lot.

‘That made me think a lot, offensively, defensively, make me think for so many years perform the way they perform, 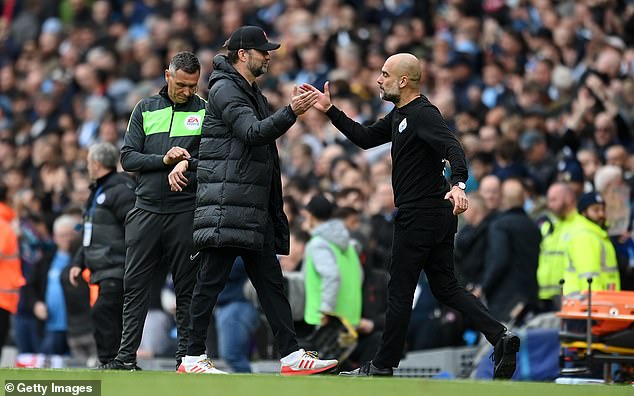 ‘I want to win the Premier League but it doesn’t matter. We’re so good and I think all our fans enjoyed it.

‘It is what it is [the draw]. You are the pundit, you have to analyse, to write and tell, it’s what is. In Anfield we played an incredible half and when we equalised, it was the same result.

‘I had the feeling we’ll miss the opportunity to get four points but I said to you, it doesn’t happen win, lose, draw it’s not over. I’d say the same with a win, it’s not over because I told you we’d take an advantage. We know what we have to do, go to Madrid, FA Cup then we finish. The Premier League is as big as possible.’

The inside story of Roman Abramovich and Chelsea’s new era