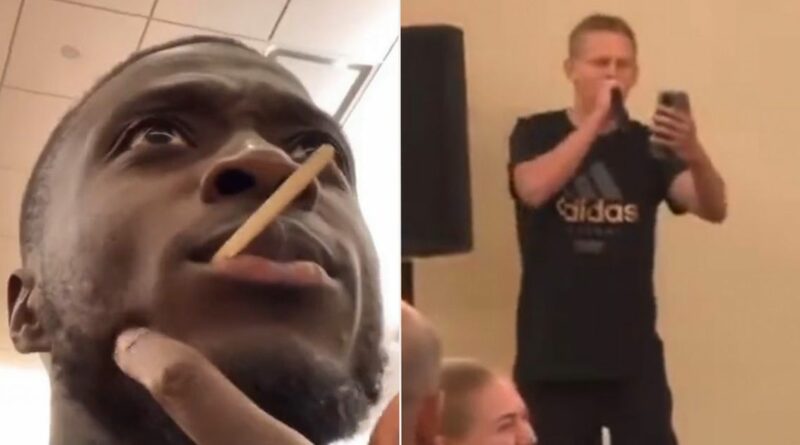 Zinchenko joined the Gunners from Manchester City on a four-year deal for a reported fee of £30million earlier this week. And the 25-year-old wasted no time getting to know his new colleagues as he joined them on their pre-season tour of the United States.

The Ukrainian defender started as Mikel Arteta's side trounced Chelsea 4-0 in the final of the Florida Cup. And while his performance on the pitch received rave reviews, his singing abilities off it didn't quite capture the imagination in the same way – at least not where Pepe is concerned.

READ MORE: Erik Ten Hag to pocket massive bonus if he gets Man Utd back in Champions League

Pepe filmed Zinchenko belting out a medley of songs, including his version of Riton x Nightcrawlers' 2021 hit 'Friday'. The original song reached no.2 in the UK singles chart. Zinchenko's version may not chart quite as highly judging by Pepe's telling reaction.

The Ivory Coast winger turned the camera on himself midway through the performance, which revealed the star looking confused and scratching his chin.

Fans on social media loved the clip, with one user writing: "Wish I was a footballer, not for the money, the fame, to be *that good* at something. I just wanna see a dressing room sit through my 16 minute rendition of Only Skin."

Someone else said: "I've no idea what he's singing." As a third person added: "Pepe's Facial at the end….he's thinking 'wtf did we just buy a balling Mr Bean?'"

Meanwhile, a fourth user commented: "Pepe's face is jokes, too bad he's a s*** player." Another fan chimed in with a savage response, joking: "That's how I look like when I see Pepe playing."

A boyhood Arsenal fan, Zinchenko already seems to be enjoying life at the Emirates. "First of all I would like to say this is a boyhood dream come true," he told the club's official website after joining from Manchester City. "I was a massive fan when I was a kid. I am so excited and I cannot wait to play for this amazing club."

Where do you think Arsenal will finish this season? Let us know your thoughts in the comments section below.

The Ukrainian star also spoke about the influence of Mikel Arteta in his decision to join the Gunners. "I would say it’s the most important role in my decision because I’ve known [Arteta] for a while," he said of the Spaniard.

"Since the first day at City I knew that he’s going to be a very good manager. The way he can see football, especially I was watching the last season of Arsenal’s games and I was really enjoying it."