Percy Tau could return to Brighton in January after head coach Graham Potter confirmed the club are actively trying to recall him from his loan at Anderlecht.

The 26-year-old striker has yet to feature for Brighton since arriving from South African side Mamelodi Sundowns in 2018 due to work permit issues.

Tau has spent the last two-and-a-half years playing in Belgium for Union SG, Club Bruges and Anderlecht and Potter stated Brighton are confident they will obtain a Governing Body Endorsement under the new points system.

“It’s fair to say it’s something we’re looking to do, but there’s a few things to go through first,” Potter said.

“He brings some attributes that are interesting, he has had a good experience in Belgium.

“He brings something a little bit different to what we have got and he wants to take the next step in his career – we want to help him do that.”

Brighton travel to West Ham on Super Sunday, live on Sky Sports, looking for their first win in six Premier League matches having drawn 1-1 at Sheffield United last time out.

Potter also confirmed Brighton will be without the injured Tariq Lamptey for the visit to the London Stadium but downplayed the severity of the injury.

He said: “It’s not serious, it’s just a slight problem with his hamstring. The nature of how he plays, you have to be careful, you don’t want him to be away for a number of weeks.

“So I am expecting him to be back pretty soon. He’s healing and recovering well. 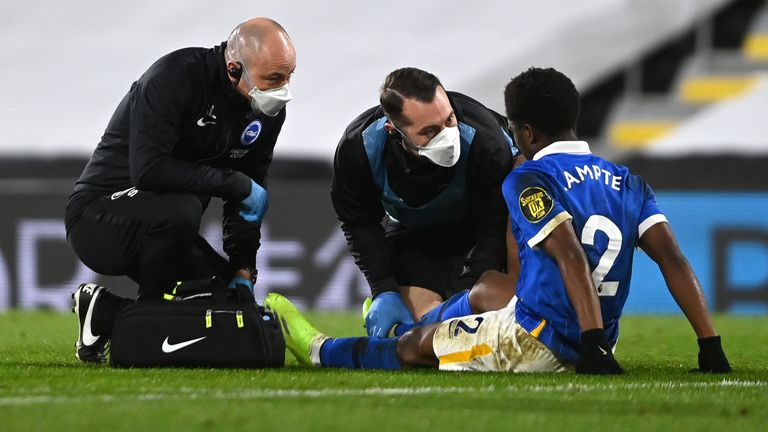 “There’s not another Tariq with the qualities and attributes that he has and that’s the challenge for us to find the solution collectively.

“We haven’t got a like-for-like replacement, so you have to adjust as a team and adjust for another person coming into the team.”

January transfer window 2021: All you need to know

The summer window may have only closed in October, but attentions are turning to what business can be done in January. Here’s what we know so far…

When does the window open?

The transfer window in England for the Premier League and Sky Bet EFL will open on January 2 and close on February 1, 2021.

The Bundesliga and Ligue 1 windows will also opener on January 2 while La Liga and Serie A will begin their trading on January 4.

What deals can be done?

As usual, players can be bought and sold across Europe and beyond. Loan deals are also able to be completed during the month-long window.

Is there going to be another domestic transfer window?

At the time of writing, there is no indication that there will be another extended domestic transfer window between Premier League and EFL clubs.

In the summer, English sides were still able to do business for a further 11 days after the first deadline on October 5. The second domestic window closed on October 16, although Premier League clubs were only able to buy from EFL clubs and not among themselves.

This saw the likes of Said Benrahma, Joe Rodon and Karlan Grant secure moves from Championship clubs into the top flight.

Keep up-to-do with all the latest transfer news and rumours in our dedicated Transfer Centre blog on Sky Sports’ digital platforms. You can also catch up with the ins, outs and analysis on Sky Sports News.