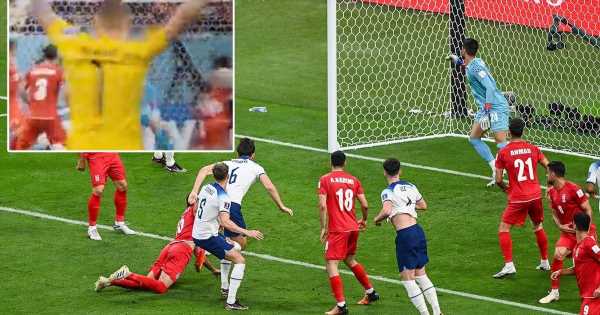 The Manchester United man threw himself at Kieran Trippier's inch perfect corner and looked to have given Gareth Southgate's side an early lead. However, the former Leicester City ace's looping, swerving header hit the cross bar and bobbled away to safety.

Everybody in the Khalifa National Stadium thought England's World Cup campaign had officially been started by a player so often maligned by fans and pundits. And one player who certainly thought he had opened the scoring was Pickford, who would have had one of the best views of the chance.

As the ball looked to be swerving into the top corner, the England No.1 raised both arms in the air in preparation for the first jubilant celebration of the tournament. And the sight of the ball bouncing off the crossbar reduced Pickford to his knees.

Fortunately, the Everton man had plenty more opportunities to celebrate in Qatar. He barely had to wait ten minutes as teenage sensation Jude Bellingham found the top corner with a wonderful looping header.

How far do you think England will go in the World Cup? Let us know in the comments section below

His first ever England goal was quickly followed by excellent finishes from Bukayo Saka and Raheem Sterling, who both netted their first ever goals in the World Cup.

The second half was a very similar picture, as Saka added a fourth for the Three Lions, bamboozling the Iran defence before cutting on his left foot and finding the bottom corner. Southgate then introduced some more fresh legs into the contest, bringing on Eric Dier, Phil Foden, Callum Wilson, Marcus Rashford and Jack Grealish.

And the latter two got in on the goals after Iranian forward Mehdi Taremi ghosted beyond the England defence and rattled home an outstanding finish. However, any joy for the Asians was short lived as Rashford scored England's fifth with one of his first touches of the ball, before Grealish converted an unselfish cutback from Wilson.

Taremi scored a second from the penalty spot in the last kick of the game, but it did little to rain on England's parade. Depending on results elsewhere, England could all but confirm their place in the Round of 16 with a victory against the USA on Friday. ]

Pickford, as will many other England fans, will certainly be hoping for more goals to celebrate.