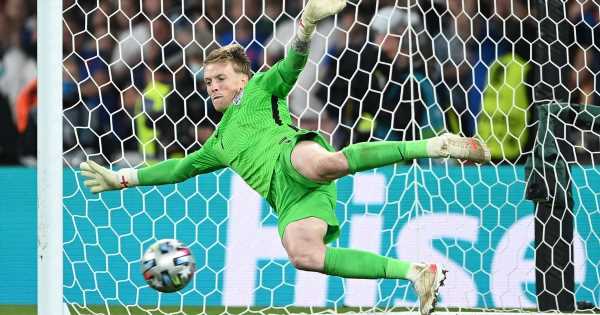 It came as England lost their first major international final in 55 years to Italy via the dreaded shootout.

Luke Shaw had put the Three Lions ahead after two minutes to send Wembley into pandemonium.

But England regressed and Roberto Mancini's men came back after the break and deservedly scored an equaliser through Leonardo Bonucci.

As the match went to penalties, all eyes were on Pickford – who had already earned the Golden Glove after five clean sheets throughout the tournament.

And the Everton stopper could have easily been the hero after saving two efforts – one from Andrea Belotti and another from Chelsea star Jorginho.

Pickford repeated his trick from the 2018 World Cup where he had the Colombian penalty-takers' details on his water bottle.

On that occasion, it proved pivotal as Gareth Southgate's men broke their shootout hoodoo to beat the South American country.

And his tactics worked to an extent but England missed three penalties of their own to lose to Italy on Sunday night.

On another occasion, it could have easily been the Three Lions lifting their first European Championship in their history.

But that is the nature of penalties in international tournaments and one that England knows too well.

Italy, on the other hand, are a deserved victor of the Euros this summer after a number of brilliant performances throughout the competition.

Many had written off the Azzurri before the tournament had begun but after opening the competition with a 3-0 win over Turkey, they rose in everyone's estimations.

Donnarumma was awarded the player of the tournament but there were special performances from many stars including their warrior defence Giorgio Chiellini and Bonucci, the tempo-controlling midfield of Jorginho, Marco Verratti and Nicolo Barella and their flying forwards Lorenzo Insigne and Domenico Berardi.