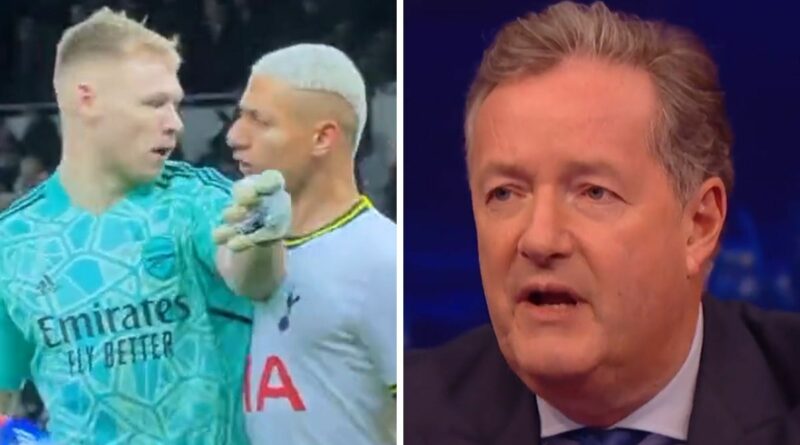 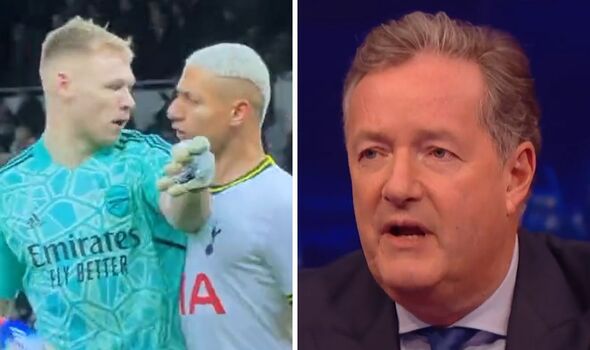 Piers Morgan has aired his frustrations over Richarlison’s antics at the end of Arsenal’s win over Tottenham at the weekend, claiming the forward ‘assaulted’ Aaron Ramsdale. Arsenal continued their incredible form with an impressive 2-0 win away at Tottenham in the north London derby a few days ago.

Ramsdale was named man of the match for his display in goal for the Gunners and celebrated the victory with a gesture towards the taunting Tottenham supporters behind his goal after the game. The England shot-stopper turned around to face the Tottenham fans before kissing the Arsenal badge on his shirt.

The gesture appeared to anger Richarlison, who confronted the Arsenal goalkeeper by barging into him and pointing his finger in Ramsdale’s face. The stewards soon intervened to protect Ramsdale before he was despicably kicked in the back by a fan as he retrieved his water bottle.

Mikel Arteta came over to try and separate his players from the baying Tottenham crowd, but Richarlison clearly felt Ramsdale was in the wrong. The Brazilian labelled Ramsdale’s gesture towards the Tottenham fans as “disrespectful”.

TalkTV presenter Morgan didn’t see anything wrong with what Ramsdale did, insisting Richarlison was the main antagonist. “Richarlison, however, in my opinion absolutely crossed the line,” Morgan said on talkSPORT.

“I think he basically assaulted Ramsdale and should be banned for at least three games. And I think the fan who then did what he did was carried by what he saw with Richarlison.

“I think players have a responsibility, if they’re going to start getting violent, it’s not entirely surprising some hooligan idiot in the crowd got involved too. So I think Richarlison was completely out of order.”

Richarlison was also involved in an incident with his compatriot Gabriel Martinelli during the match. The Tottenham star was warming up on the touchline when Martinelli came over to take a corner.

Spotting his Brazilian team-mate, Martinelli offered out his hand to Richarlison but the striker point-blank refused the gesture. Richarlison has since apologised to Martinelli, explaining his rejection was due to the heat of the moment.

“I want to apologise to him (Martinelli). He put his hand out and I didn’t. Like it or not, he is my Brazil teammate. This is part of it, it’s a derby, we were hot-headed,” he said. “With Gabriel, I argued a little because he was holding up the game. He ended up getting a yellow (for time-wasting), and I said to him, ‘let’s play, let’s play’. And he was holding up the game.”

Timo Werner shows there's more to his game than goals