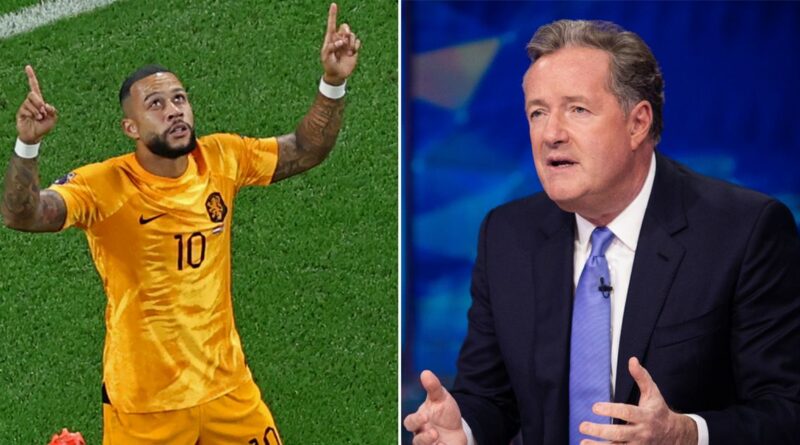 The 28-year-old forward was in stellar form as the Netherlands beat the USA 3-1 to progress to the quarter-finals in Qatar. He netted the opener with a clinical strike from the edge of the box to notch his first goal of the tournament.

And after an all-round impressive display in the last-16 tie, the Barcelona man received plaudits for being a threat throughout. Among his admirers was Arsenal fan and TV presenter Morgan, who took to Twitter to offer Gunners boss Mikel Arteta some advice for the January transfer window.

The ex-Good Morning Britain host tweeted: “Arsenal should sign @Memphis in January. Such a good player and would work well up front with Jesus.”

Depay will be a familiar name to Premier League fans, having joined United for £25million back in 2015. He failed to live up to the hype after his move from PSV and was moved on to Lyon after just one full season at Old Trafford.

Do you think Arsenal should sign Memphis Depay in January? Let us know in the comments section.

The forward was able to bounce back and find his feet in Ligue 1, scoring 76 in 178 appearances. That earned Depay a transfer to Barcelona in the summer of 2021, where he has since lost his place in the starting-eleven.

Barca manager Xavi strongly favours Robert Lewandowski and the likes of Ansu Fati, Ferran Torres and Raphinha across the front line. And with just three appearances under his belt this season, Depay's World Cup displays could set him up for a big move.

Arsenal have not yet been linked with the ex-Red Devils winger – but Morgan’s shout could be more reasonable than may initially seem. On Saturday, striker Gabriel Jesus was ruled out until January following a knee problem he sustained playing for Brazil.

Depay could add some much-needed depth to Arteta’s squad, who currently only have Eddie Nketiah in the same position. The Dutchman’s experience and prowess up-top could be the perfect short-term injection the Gunners require to keep their title challenge alive.