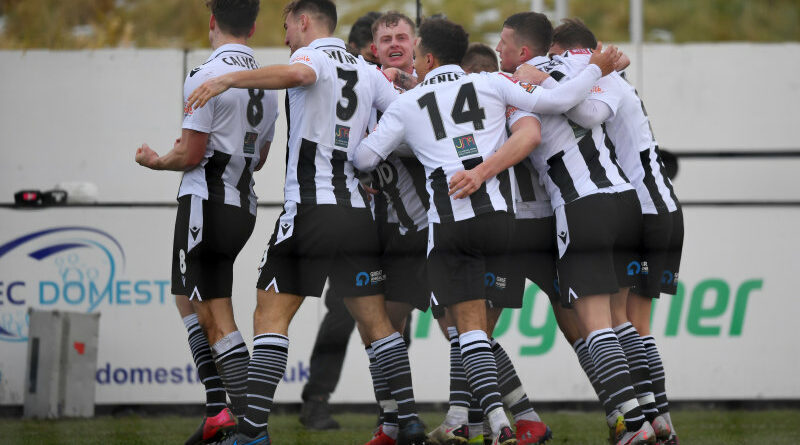 Straining to reach the high notes of an Adele ballad, Chorley's footballers have become the part-timers heard around the world as an incredible run in the FA Cup continues.

In a knockout competition – the oldest in world soccer – that began with 368 teams, Chorley, of the sixth division, are among the last 32 standing. 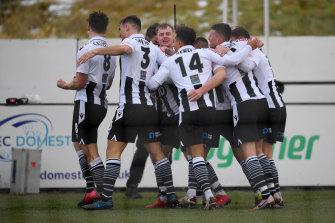 Mike Calveley celebrates with his Chorley teammates after scoring their second goal.Credit:Getty Images

Once second-tier side Derby were beaten 2-0 overnight on Sunday (AEDT) it was the time for vocal chords to be stretched with the latest rendition of Someone Like You. Chorley's version was quickly posted on social media, just like after beating professional clubs in the previous two rounds, and viewed by millions again.

Pitch perfect from the field to the dressing room.

The 138-year-old club from a small northwest England town is into the fourth round for the first time.

"For a team who were bottom of National League North after four games with zero points, to get to round four is unbelievable," Chorley manager Jamie Vermiglio said. "Chorley is on the map now and for us it's a boost. We're in the limelight."

Cashing in, too, from the broadcasters and prize money, just as no fans are allowed into sports venues due to the pandemic. 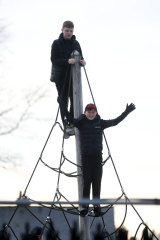 Derby were without their first-team players and interim manager Wayne Rooney due to COVID-19 cases, forcing the second-division club to play a side with an average age of 19 and without any first-team experience. But they are still full-time players, largely as part of the academy.

It wasn't just the pandemic that threatened the match going ahead. Sub-zero temperatures in Chorley over the past week forced the team to rent covers to try to prevent their surface from freezing. Their groundsman even camped at the ground in a tent to try to keep the pitch heated overnight.

It thawed out and the goals came from Connor Hall in the 10th minute and Mike Calveley in the 84th.

"Any Premier League team away really," Hall said when asked who Chorley hopes to face next.

Vermiglio, a headteacher in his day job, had to prepare for his biggest game in management while dealing with his school suddenly being closed after England was placed into a new lockdown this week.

"We can all enjoy and savour this moment," he said.

Emile Smith Rowe and Alexandre Lacazette scored in extra time to send holders Arsenal through by beating Newcastle 2-0. Smith Rowe received a red card before scoring for a late challenge on Sean Longstaff but it was overturned by referee Chris Kavanagh following a pitchside review.

Scott McTominay's first-half header gave a much-changed Manchester United a 1-0 victory over Watford at Old Trafford. It was a quick recovery against second-tier opposition after Ole Gunnar Solskjaer's side was beaten by Manchester City in the semi-finals of the League Cup during the week.

After four games in charge of West Bromwich Albion, Sam Allardyce is still without a win after the Premier League struggler was knocked out of the cup by a third division club that fired him 25 years ago. Blackpool held West Brom to 2-2 through 90 minutes and survived extra time before winning a penalty shootout 3-2.

Chris Wilder finally reached a century of wins as Sheffield United manager. He'd been waiting six months. But after the 3-2 victory over third-tier side Bristol Rovers it's back to trying to stay in the Premier League for the last-placed team without a win this season. The Blades were twice pegged back after going in front before Jayden Bogle struck a second-half winner.

Fulham were also forced into extra time by west London rival Queens Park Rangers before Bobby Decordova-Reid and Neeskens Kebano scored to send the Premier League strugglers through with a 2-0 win.

Burnley faced elimination against MK Dons until Matej Vydra's stoppage time goal, but then beat the third-tier side 4-3 on penalties.

Fulham vs Southampton: Claudio Ranieri ready to lose his temper to turn Cottagers around