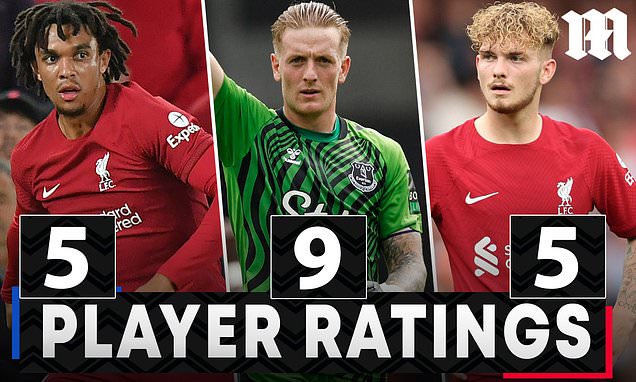 Everton and Liverpool played out an exciting 0-0 draw as both sides went close to finding winning goals.

The Toffees had a Conor Coady goal ruled offside by VAR whereas Liverpool hit the woodwork on more than one occasion.

Sportsmail gives out the player ratings from a frantic Merseyside derby at Goodison Park on Saturday afternoon. 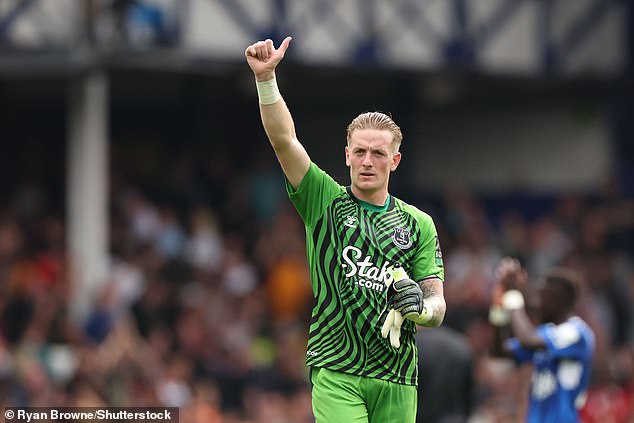 Important touch to deny a fierce Nunez volley in the first half and made a stunning triple save in quick succession, two from Firmino and Fabinho.

Strong performance at both ends of the field, relished his physical tussles with Diaz, almost set up a goal for Davies and almost grabbed one himself

Thought he had scored the opener only to be ruled out for offside. But still had a derby debut to be proud of as he helped nullify the Red threat. 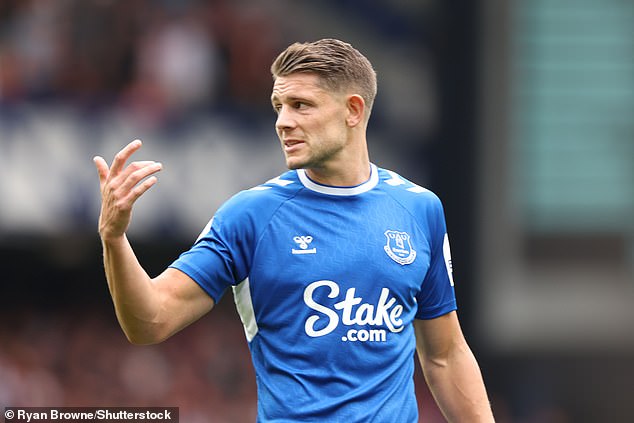 Forming a solid pairing with Coady and performed well against the twin threat of Nunez and Diaz. Made up for lack of pace with great reading of the game.

Ukranian covered miles up and down the left while doing a decent job of keeping Salah unusually quiet.

His type of game in which he could snap around the ankles of Liverpool’s midfielders. Desperately unlucky not to open the scoring when he hit the post. 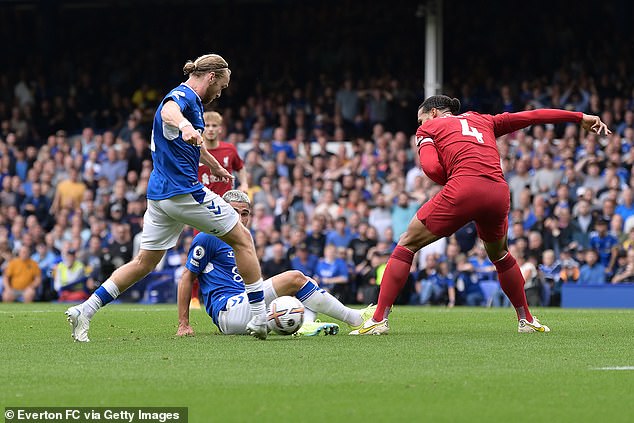 Game’s first booking, for a trip on Carvalho, but youngster showed promise, trying to drive Everton forward from midfield.

Threatened the goal with a hopeful volley after the restart but saw little of the ball going forward and was more of a defensive role which he did well.

Lively performance from Everton’s in-form winger although sometimes a little too greedy but his cross almost saw Maupay score and it was his centre that produced the disallowed “goal.” 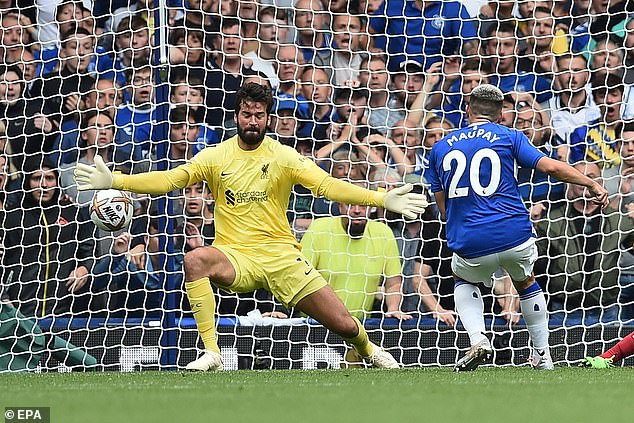 Decent debut and was a nuisance in the Liverpool area where his persistence almost carved out an opener for Davies. Only denied by a great Alisson block.

Looked energised now transfer speculation is behind him. Put himself about energetically and lucky to escape a first half caution.

Only one first half save to make, from a Gordon snapshot, but showed great focus and was alert to deny Maupay and McNeil after the break. 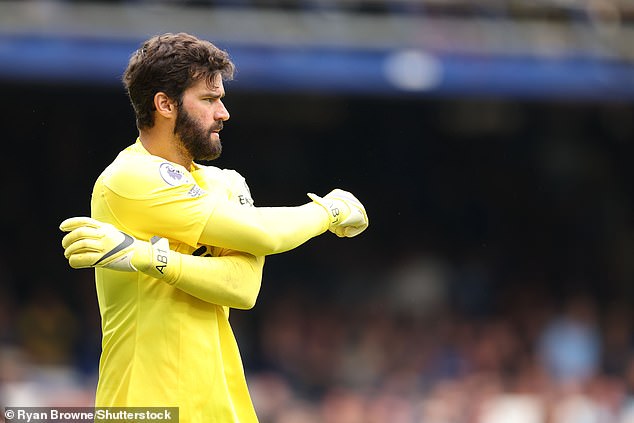 His usual impressive self in possession but Gray caused him problems and was sacrificed by Klopp before the hour.

Sloppy in possession and error almost led to a Davies goal but otherwise looked solid during spells of Everton pressure.

Marshalled his defence well and also looked a threat at Liverpool set-pieces. Booked for a second half, studs-up challenge on Onana and could have seen red.

Brought in for Andy Robertson but lasted less than an hour. Defended well enough but use of the ball was wasteful.

No questioning his work rate but youngster struggled to make an impact in a frantic midfield and was sacrificed with ten minutes to go. 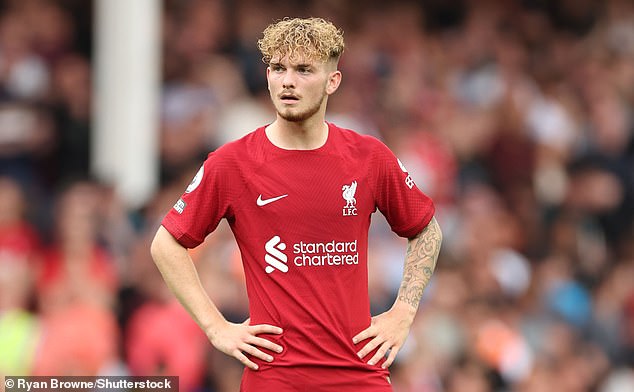 Knocked off the ball a little too easily on occasion in a tough midfield battle but looked dangerous in attack, only being denied by a great Pickford save.

Injured in a foul by Onana and replaced at the break, Showed some nice touches but not quite on the pace of a red hot derby. 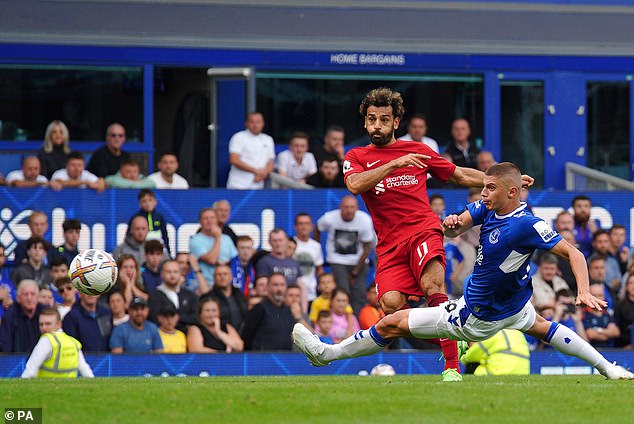 Service was terrible and did not have a touch in the Everton box in the first half but his incredible pass almost set up Firmino late on and hit the post in injury-time.

Kept his cool impressively and hit woodwork from his only real first half chance with a brilliant piece of control. Missed a good second half opening. 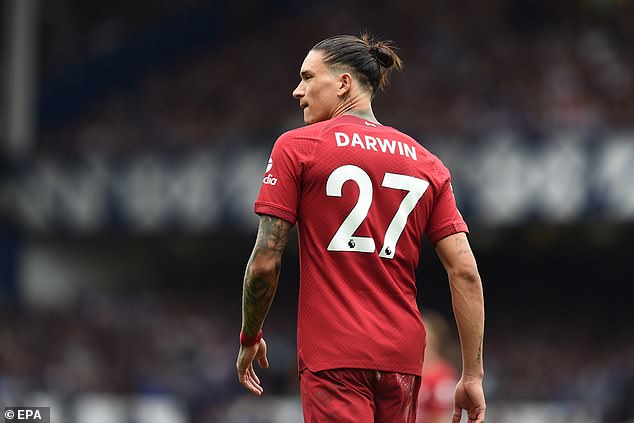 Also hit a post and looked dangerous on a couple of other occasions but, like the rest of his forward line, suffered from Liverpool’s failure to control midfield. 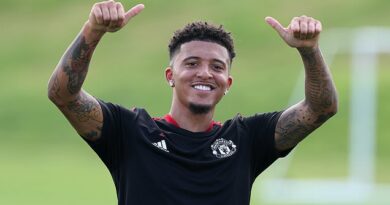