After watching on the sidelines for the first few weeks of the season, Hakim Ziyech must have been itching to play his part in an exciting attacking shape for Frank Lampard. The 27-year-old summer signing has been eased into action and the patience regarding his availability in recovering from a knee injury looks to be paying off.

He gave the Chelsea fans a taste of his talents in the 4-0 win away at Krasnodar in the Champions League, netting his first goal for the club. At Turf Moor, he was an even greater threat and came away with a goal and an assist to his name.

Playing off the right but more centrally than he was deployed for Ajax, he rotated and linked well with Tammy Abraham and Timo Werner – as seen for his opening goal where he managed to wrong-foot Nick Pope with a clever finish.

Ziyech looked to be enjoying the role, which allowed Reece James to provide the width from full-back and capped his display when receiving a pass from James and playing in Werner for Chelsea’s third. With improvement to come and his confidence to increase, he’s an exciting prospect in this rapidly improving Chelsea side.
Lewis Jones

Winning while playing badly: the sign of champions? That won’t cut it for Jurgen Klopp.

Liverpool once again limped over the line against West Ham, taking three points despite starting slowly at Anfield and looking below par for large chunks. But they won’t keep winning these games like this. They will drop points.

We can talk about defensive injuries for days – and yes, West Ham’s opener wasn’t pretty for Liverpool’s back line – but that didn’t feel like the main problem for Klopp’s side on Saturday.

Instead, it felt like a distinct lack of sharpness and energy throughout the team. Intriguingly, though not explicitly blaming his side of lacking character after the game, Klopp did make an excuse for why his side may not be showing the spirit that made them Premier League champions.

“The basis for all we do and did is the character of this group. I cannot convince them to fight if they are not fighters. That’s not possible.

“If they are not ready to put all the desire in a game and show all the determination, I cannot convince them. It was always easy with this team to show them the right path and then that they follow it.

“It’s an incredibly difficult time. [For the] outside world 100 per cent, and for the boys as well. It’s really demanding the number of games we have to play. You can only fight when your body is ready.”

Few teams depend on intensity like Liverpool. Do they have enough quality to see them through when the energy drops a few notches, in this season of all seasons? Recent evidence suggests they can, but it may only last for so long.
Gerard Brand

Much of the Man City focus in recent weeks has been on injury troubles, particularly up front, and is Pep Guardiola going back to Barcelona? Just for reference, he has no immediate plans.

There have also been draws against Leeds and West Ham, with some questioning City’s resilience and Guardiola making the worst start to a season in his coaching career.

But since losing 5-2 to Leicester in the second Premier League game of the season, they are unbeaten in all competitions – a run of seven games. In fact, their last two have been wins and clean sheets as central defenders Ruben Dias and Aymeric Laporte start to click.

On Saturday, they restricted Sheffield United to just one shot on target and three overall, had 65 per cent of possession and 18 shots. After the game, Guardiola was slightly frustrated that his side had not taken more of their chances, but some of that credit has to go to Aaron Ramsdale and John Egan, who made some superb stops and blocks between them.

With their unbeaten run and perhaps a long-needed centre-back solution, City are quietly building some momentum. With the Premier League table remaining congested and results increasingly hard to predict, you can never write off City for another title-challenge this season.

They have the talent and the experience and, after missing out on the Premier League title last season, something to prove.
Charlotte Marsh

Test of Blades’ steel after another defeat 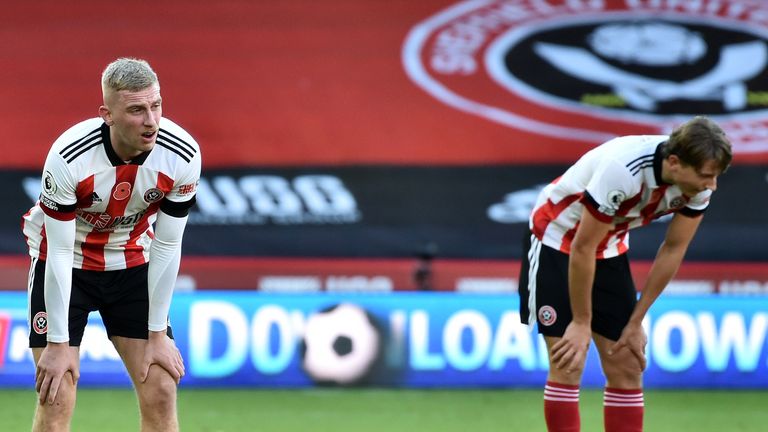 These are hardly games that will shape Sheffield United’s season but after the promise of their performance at Liverpool last time out, frustration will linger following this defeat.

The 1-0 scoreline belied City’s dominance at a sodden Bramall Lane – certainly by half-time – and while Chris Wilder can justify a containment approach against the likes of Raheem Sterling and Kevin De Bruyne, the nagging disappointment was that here were so many flaws of their own making: the looseness in the unsurprisingly rare spells of possession, the stark lack of quality from familiarly promising positions out wide – only two crosses found a red and white shirt – and the propensity to go long too often to Oli McBurnie and Rhian Brewster.

There is no doubt that injuries to Jack O’Connell and John Fleck have blunted the Blades’ attacking impetus down the left; diluted the DNA of overlaps and overloads that made them such an irresistible watch for so much of last season, but shapes and systems cannot account for cheap turnovers or errant decision-making.

The Blades boss spoke of “anxiety” in the 1-1 draw against Fulham and pointed again to a mini-crisis of confidence as a troubling run stretched to six defeats in seven.

Wilder has reluctantly turned back to a sports psychologist but is after some Sheffield steeliness from within. “What about the players showing that quality? They’ve obviously got it cause they’ve done it (last season). What about them showing that and being brave? They have to dig a little bit deeper.”

The Blades desperately need a break but, for now, this is a test of nerve.
Kate Burlaga