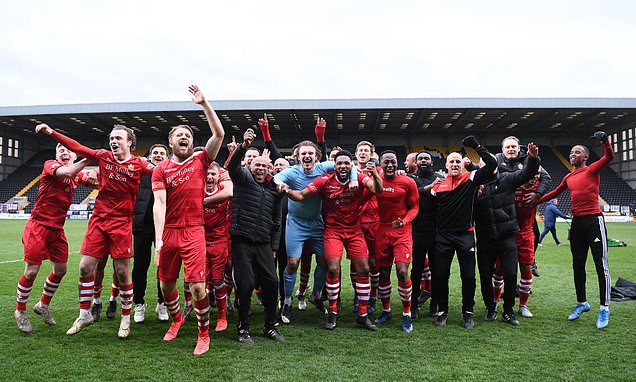 By the time Hornchurch forward Chris Dickson began the lonely walk for their fifth and final penalty, team-mate Mickey Parcell had seen enough.

Rather than watch, the defender turned and stared into the deserted family stand.

When Dickson scored, the unthinkable became reality and Hornchurch bodies streamed out of the dugout. Parcell collapsed on to his back. There he stayed as the bundle bulged elsewhere. 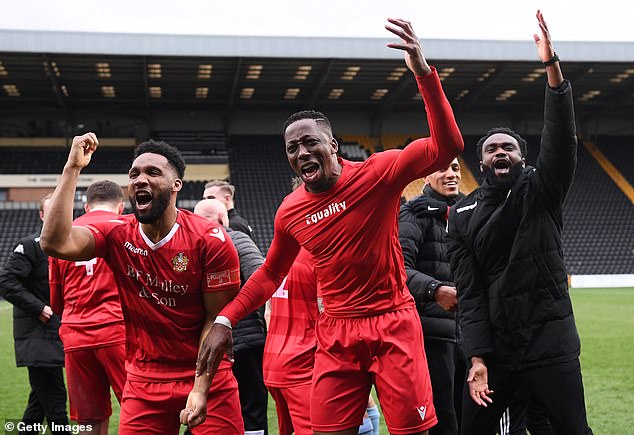 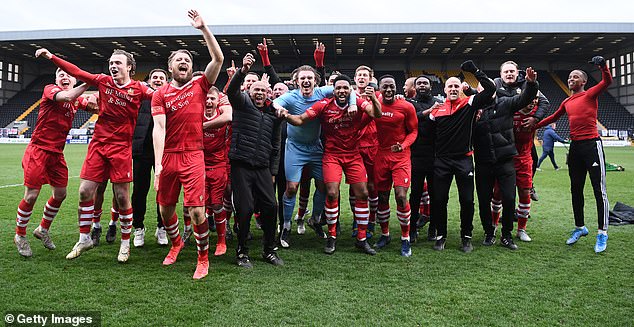 This week, Parcell will wander back down Cinderella Path to Clowns Nursery in Golders Green — those toddlers won’t teach themselves PE.

The first line of his c.v. reads: ‘Aspiring to be the best I can.’ Well, this will take some topping. For him — and for Hornchurch.

Non-League scalps don’t come more prized than Notts County and yet this motley crew from the seventh tier bustled through Meadow Lane en route to a first FA Trophy final. 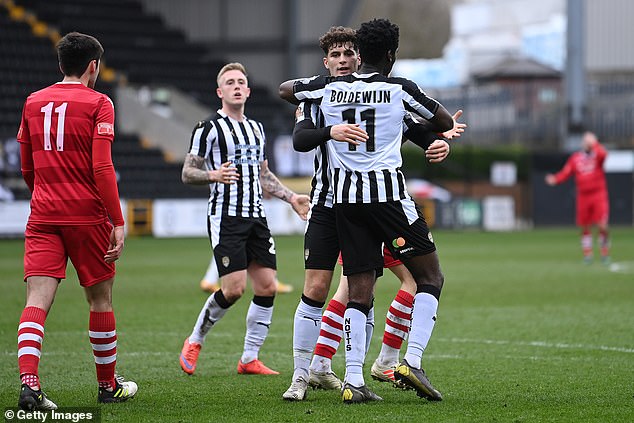 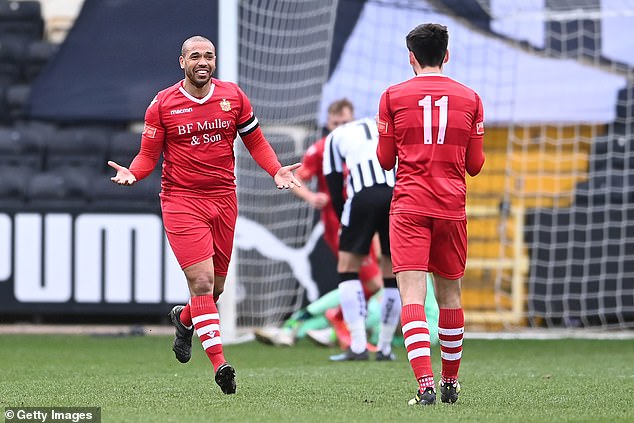 ‘Just a pub team from Hornchurch,’ their players sang. A tad harsh, but it sums up their bonkers tale.

Six teams from higher divisions have fallen to these part-timers, who have not played an Isthmian Premier Division game since November. Nothing in their 98-year history comes close to this.

No wonder their players hoisted manager Mark Stimson into the darkening skies.

The route to Wembley is familiar by now — in May, he can win a fifth FA Trophy.

‘We’re in dreamland,’ Stimson said. ‘It’s an amazing day, something you can only dream of.’ 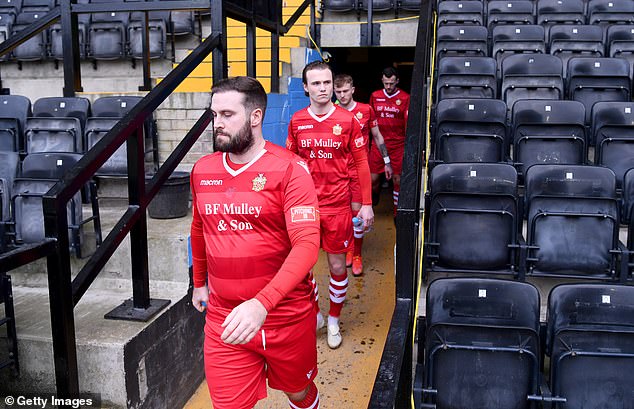 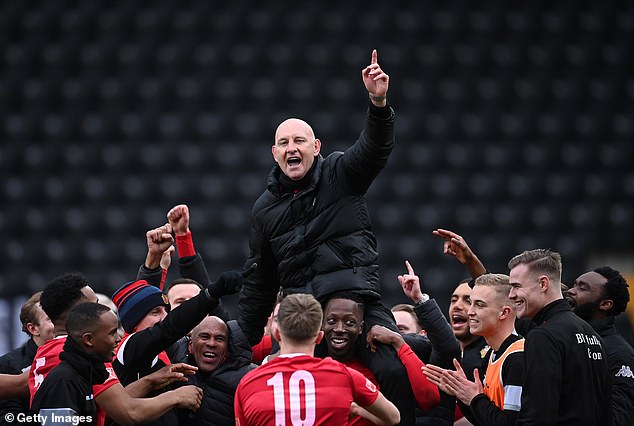 What his opposite number would have given for a shot at his first.

Ian Burchnall only arrived at Meadow Lane on Thursday, after the dismissal of Neal Ardley. The 38-year-old met Graham Potter while coaching university football in Leeds and soon followed him to Scandinavia — working as assistant to Brian Deane and then as Potter’s replacement at Ostersunds.

He turned heads at clubs in League One but was instead lured by this experiment at the world’s oldest professional club.

Danish brothers Christoffer and Alexander Reedtz rescued County in 2019 after they fell into non-League and faced financial peril. 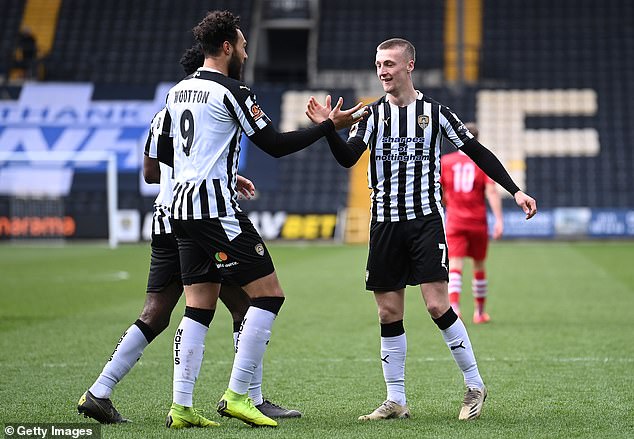 Their other venture, Football Radar, provides data analysis for the betting industry. Now it helps inform how County are run.

Portugal’s Ruben Rodrigues and Elisha Sam, a Belgian forward plucked from Bulgaria, were signed by their new recruitment model. Both scored here.

Some are calling them the National League Brentford, and County, too, saw last season’s promotion push end in the play-off final. They were in the hunt this time round when the Reedtz brothers boldly ousted Ardley.

Burchnall had only 45 minutes on the training pitch but his team should have been out of sight by the time Hornchurch equalised twice before half-time.

Covid has curtailed their past two league seasons, so to fuel this cup run, their band of teachers, personal trainers — and former Ghana international Dickson — have been honing football’s ‘horrible side’: physicality and running. 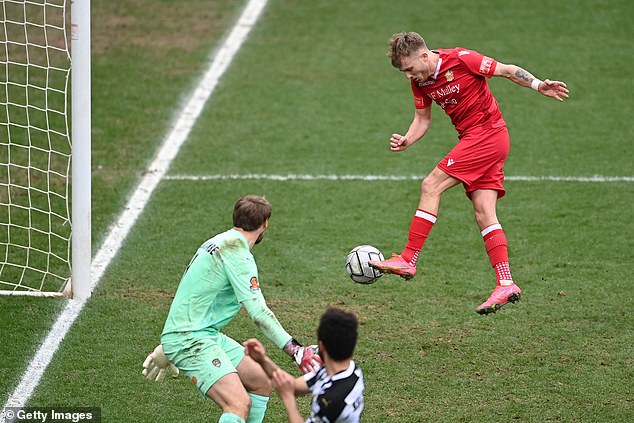 Even after Sam’s late sickener, the Urchins would not go away. When Liam Nash turned home a stoppage-time equaliser, Parcell sunk to the floor.

He was a wreck as his team-mates held their nerve in the shootout, too.

Stimson was embroiled in a furious confrontation, sparked by some poor disruption tactics from County goalkeeper coach Jake Kean. But, after Joe Wright saved from Jake Reeves, Hornchurch had the last laugh. 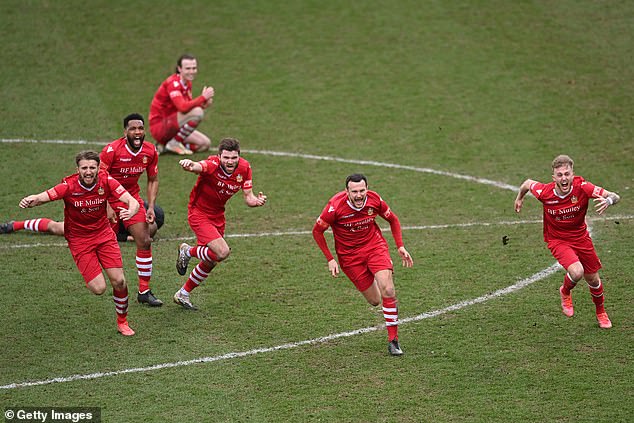 A penny for the thoughts of Alexander Reedtz, who had come up from London to watch his theory put to the test.

His university thesis studied the impact of managerial sackings. ‘There are a lot of irrational ones,’ he explained in 2019. ‘We look beyond the result.’

All very considered. The issue? There are no diagrams on trophy cabinets or the league table. And make no mistake: County must go up soon.

As for Hornchurch, it’s up Wembley Way for a showdown with phoenix club Hereford.

Grant Leadbitter set for Sunderland medical ahead of move from Middlesbrough