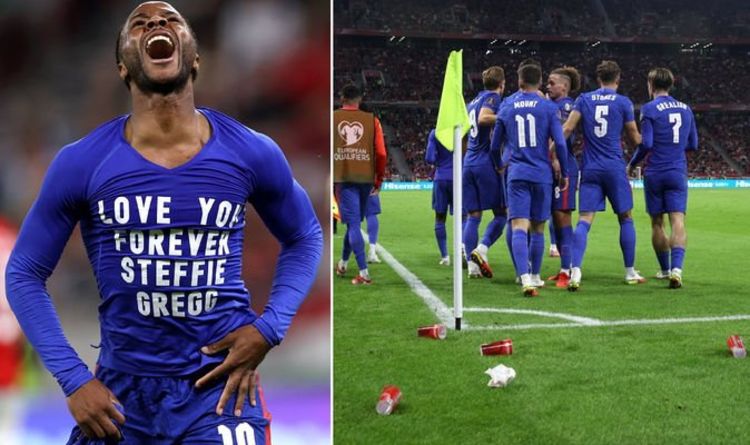 Raheem Sterling showed his immense humanity even as the racist Hungary fans booed, whistled and pelted him with missiles. The England winger finally broke the deadlock just after half-time and lifted his shirt to reveal a message paying tribute to social media influence Steffie Gregg, who died on Tuesday.

And then he turned his shirt around to remind the Hungary fans of his name and his number before sinking to the ground and kissing the grass.

The cacophony and dozens of paper cups that fell around his prostrate figure could unwisely be excused away as the adverse reaction to an opposition player finally breaking the home nation’s resolve.

Harry Maguire’s third was greeted with a flare thrown onto the pitch, but by then, with regard to the fans’ indiscipline, all bets were off.

Certainly, after the vociferous and nearly uniform booing of the England players taking a knee before kick-off, this was always going to be another difficult night of international football.

Hungary were charged by UEFA after all three of their European Championship matches, both here at the 67,000-capacity Puskas Arena and in Germany.

However, in another nonsensical sign of the dysfunctionality at the core of football, the two-match ban they received from European football’s governing body had no impact on this fixture, which was being played under FIFA auspices.

The best Gareth Southgate’s side could try to do was to make it about the football.

With Harry Kane leading the line with Jack Grealish and Raheem Sterling alongside him it was a chance for Manchester City fans to see what might have been this season.

But for a disappointing opening 45 minutes, it was a far from unstoppable force.

If City had spent the extra money in assembling what is effectively the £300m strike force Southgate has got for nothing, they would be expecting more of it.

But Sterling ran down too many blind alleys, Grealish was too slow to move the ball on, and Kane struggled to get involved with either of them.

All it required, though, was a bit of patience.

Kane was finally fed in five minutes after the break and took the ball beautifully in his stride but his shot was unconvincing and Hungary goalkeeper Peter Gulacsi denied him.

But it gave England belief at long last and perhaps in keeping with the concerns about the crowd, Sterling was a better man to inflict the crucial blow.

England finally managed to attack Hungary with pace and precision, Mount running past Jack Grealish to pull the ball back to Sterling to provide a simple finish.

That strikeforce finally beginning to pay dividends. Grealish created another gilt-edged chance for Kane, who uncharacteristically failed to find the back of the target.

Then from a corner, Maguire’s slabhead was too powerful for Gulacsi and his downward header slithered through his hands and over the line.

Hungary belatedly began to show some initiative but England – buoyed by their defensive success at Euro 2020 – stood firm.

And Rice completed the rout with another stoppable shot that embarrassed the former Liverpool goalkeeper once again.

Late monkey chants picked up by TV reporters sat in front of the ultras only compounded another miserable night for the Hungarian FA.

But Southgate’s side – with their football, thankfully, as well as their impeccable behaviour – once again made the nation proud.