Raheem Sterling is ‘crazy’ about wanting to leave Manchester City amid interest from Barcelona, reports say. The Catalan giants are looking to back new manager Xavi when the transfer window reopens in the New Year. And they could be about to raid the Premier League as they look to turn their La Liga campaign around.

City signed Sterling back in the summer transfer window of 2015, when Manuel Pellegrini was in charge.

And the England international has been a big hit during his time at the Etihad Stadium, establishing himself as one of the best wingers in world football in the process.

While Sterling has produced the goods for City, however, his form has dropped off over the past 18 months.

Though he was outstanding for England at Euro 2020, playing a key role as Gareth Southgate’s side made the final, he’s struggled under Pep Guardiola in the time since.

And, now, Sport say Sterling is ‘crazy’ about wanting to leave City behind.

The England international feels he needs a new challenge at this stage of his career and is unwilling to sign a new contract over at the Etihad.

Therefore, he’s looking to join Barcelona in the New Year.

And the Catalan giants are willing to make a deal happen, albeit on their own terms.

Due to their financial situation, Barcelona know they lack the funds to sign Sterling permanently in the New Year.

Consequently, they instead want to sign the City star on loan with an option to buy for a fee of £43million at the end of the campaign.

And whether a move materialises remains to be seen.

Barcelona are now under the control of Xavi, who has been brought in to replace Ronald Koeman.

And it’ll be fascinating to see how the return of their former No 6 works out, especially given how things have played out at other teams.

Barcelona have turned to old boys such as Pep Guardiola and Luis Enrique in the past, with the pair both hits.

Real Madrid were successful under ex-midfielder Zinedine Zidane, but less so when Santiago Solari ruled the roost.

Manchester United brought in Ole Gunnar Solskjaer in December 2018 but, now, their old hitman is facing the sack.

And Arsenal remain a work in progress under Mikel Arteta, who previously skippered the club.

Xavi recently opened up on his return to Barcelona, saying: “The two times Barcelona came – and they did even though they said they didn’t…

“At a personal level and a footballing one I thought it was too early and I have to be honest with myself.

“But now with Jan [Joan Laporta] there’s a good relationship, there has been all my life – he’s the best president this club has had.

“He does not have two faces and there’s a good synergy. He called me, and I had no doubt.”

And, on restoring order at Barcelona, he added: It’s not a case of being hard on them; it’s a question of order.

“It’s crystal clear. At the start it is important we talk about work, values, respect, attitude, effort. If we don’t have those values we don’t have a team.

“We need that, then we can talk about the model.

“In my opinion, the most important thing is the rules first and then we will decide how we play. I have had a good teacher in Guardiola, of course.” 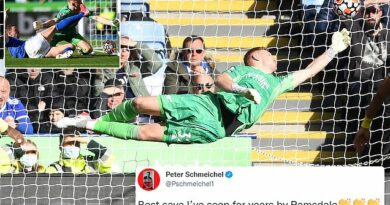 Arsenal keeper Ramsdale produces a brilliant save to keep out Maddison