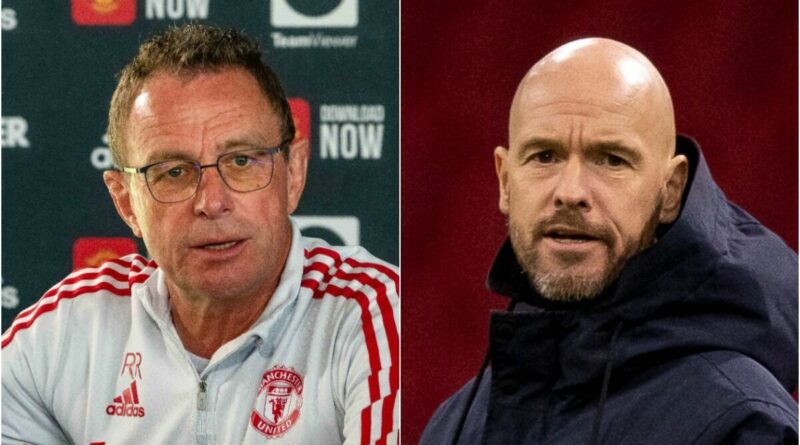 Manchester United interim manager Ralf Rangnick has suggested that fans should be patient with Erik ten Hag once he takes over this summer. Having endured their fair share of hard times this campaign, the Old Trafford faithful will undoubtedly be hoping for a swift turnaround in fortunes given the Dutchman’s stellar work with Ajax.

Ten Hag’s end-of-season arrival as Man Utd boss was confirmed this week after months of speculation. Rangnick is therefore set to vacate his interim post after taking over from Ole Gunnar Solskjaer, who kicked off the season in turbulent fashion.

A huge summer revamp is on the cards which, naturally, has left fans excited. But plenty of big names came through the Old Trafford doors last summer and it did little to bring the team success, so Rangnick has urged supporters to bear ‘reality’ in mind once Ten Hag arrives in Manchester.

“All I’ve heard from people who work with Erik is that he is a very good character,” he said, “Obviously he needs the assistance of the whole club, all the people inside the club, and I think he will get that and have the chance to mould a new team together, with the scouting department and the board, which is necessary.

“For me this is the most vital part, that the club manages to get in the best possible players, with the right attitude and energy. We need positive energy for the new team and this is also important for the new manager.

“We spoke about other clubs in a similar position as United five or six years ago, so if the right lessons are being learned from what has happened this season, this could be one of the good things from what we’re going through right now.

“It’s not about the manager’s quality, it’s about changing all the other things. But there’s the level of expectation. This has also got to do with patience, but at a club like Manchester United, it’s difficult to tell people to be patient.

“We have to face the current situation. It also makes sense to have a sense of reality. I wouldn’t even call it patience, I would call it reality. We have to acknowledge this and this would also help Erik Ten Hag.”

Indeed, fans have had to show patience and cope with reality since the 2013 departure of legendary boss Sir Alex Ferguson. Trophies have been relatively scarce ever since, and they last got their hands on silverware all the way back in 2017 when they beat Ajax in the Europa League final.

Ten Hag could bring a desirable philosophy to the Red Devils hotseat, having shown a capability to bring through young talent and unearth gems during his time with the Dutch giants. United fans will naturally hope that he can repeat those feats at Old Trafford.

Inter Milan first in town, as fans wait to meet and greet