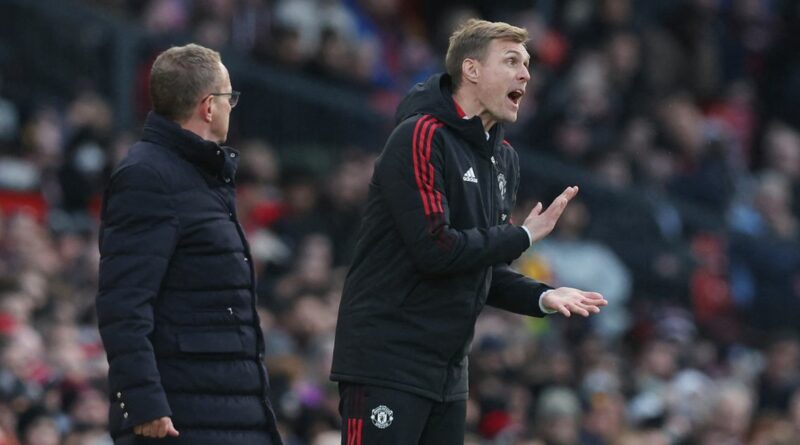 Ralf Rangnick has ‘taken issue’ with the methods of Manchester United director of football Darren Fletcher and his ‘hands on’ approach.

Rangnick has struggled since replacing Ole Gunnar Solskjaer in the dugout at Old Trafford, finding himself unable to impose his tactics onto the squad for one reason or another. The club’s reluctance to let the German sign players in the January transfer window has also proved costly.

Rangnick has been a calm, unimposing figure on the sidelines at the Theatre of Dreams. But the can’t be said for former Red Devils midfielder Fletcher, which has annoyed the former RB Leipzig boss.

The Telegraph reports that Rangnick has ‘taken issue’ with Fletcher shouting instructions at the players from the dugout and asked him to stop doing so. In Germany, a sporting director will be amongst the staff on the sidelines, but it is unusual for them to essentially take up another role for the 90 minutes of a match in the same way that Fletcher has previously.

The report also states Rangnick has also been ‘surprised’ by how Fletcher’s desire to be a part of first-team training. When the group are one player short then the Scotsman has participated, though that does not appear to have been an issue for Rangnick.

Fletcher has not only caused a stir amongst staff over the past few weeks either, as he reportedly came to blows with a fan at Old Trafford earlier this month against Leicester City. After a comment from a fan about the commitment of the players after Kelechi Iheanacho had put the Foxes ahead, Fletcher shouted back ‘who the f*** are you?’”

Speaking to Manchester Evening News, Jamie Caplan – the fan in question – recalled the story. He explained: “I said, 'you don't f—–g care'. It wasn't directed at Fletcher personally or anything towards him. He's the one who took offence and turned around and asked me who the f–k I was and to sit down.

“That's when I went back at Fletcher because I took that very personally. I then went into a bit of a rage, so he didn't say much then. And then Scott McTominay turned around. I couldn't make out what he was saying because I was already walking up the stairs by this point.”

It remains to be seen whether Fletcher keeps his seat in the technical area when Erik ten Hag is appointed as the new United manager in the summer. The former midfielder has been involved in the talks for the Dutchman to leave Ajax in favour of the Red Devils.