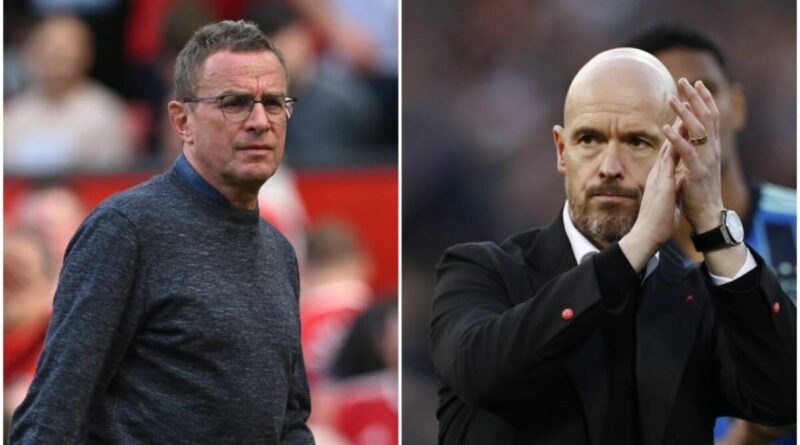 Ralf Rangnick won’t speak to his Manchester United successor Erik ten Hag until mid-May. Ten Hag has been appointed as United’s next manager on a four-year contract and will take over the reins on July 1, once he has concluded his work with Ajax. And with Rangnick concentrating on the end of the season, the two managers will not have time to speak to each other.

Rangnick has three more Premier League games left in his interim spell in charge of United following the 1-1 draw against Chelsea at Old Trafford on Thursday night. The German will oversee their final home game of the season against Brentford on Monday, before fixtures against Brighton and Crystal Palace.

Meanwhile, Ten Hag is busy masterminding the end of Ajax’s Eredivisie campaign. The Amsterdam side are top, four points clear of PSV Eindhoven, with four games left to play. They host PEC Zwolle on Saturday, travel to AZ Alkmaar, host Heerenveen and then finish their season away at Vitesse Arnhem on May 15.

Once that game is out of the way, the 52-year-old Dutchman can then fully turn his attention to what awaits at United. Speaking ahead of the Chelsea game, Rangnick explained that the two would have to wait to discuss the task at Old Trafford.

JUST IN: Chelsea boss Tuchel hits out at two of his players after Man Utd draw

“His focus is on Ajax now and trying to win the title now,” Rangnick said. “My focus is on our club and getting the best possible results. Whenever he has time or would like to speak, I’m available. But I would not want to contact him on my own account right now.

“I’m looking forward to working in that advisory role and obviously helping Erik as much as he wants it himself. So far, we haven’t been able to speak with each other and we have had no contact. He has his focus on Ajax, I have my focus on Manchester United here. Obviously, I’m more than willing and prepared to help both Erik and whomever in the club in order to change everything for the better.”

Rangnick is reportedly in the frame to become Austria manager once he leaves United this summer. However, Sky Sports report that the German will still be able to fulfil his consultancy obligations with United until 2024 while working for Austria.

Writing in the match day programme for the Chelsea game, he has given his approval to Ten Hag’s appointment. “I think Erik is a very good choice,” he wrote. “From those I have spoken to within football who know him and from my own impression of his style of football, I see it as a really positive appointment.”

Rangnick has won just two of his last 11 matches in charge of United, who are sixth in the Premier League, five points adrift of Arsenal, despite playing two games more.

Kylian Mbappé Is The Future, And The Future Is Now