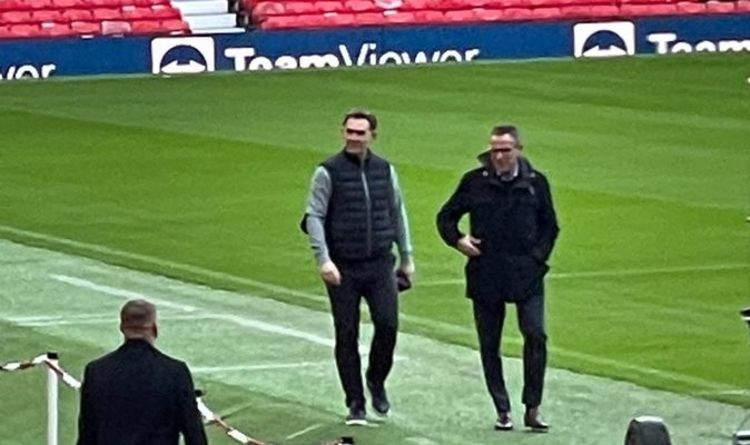 Ralf Rangnick is having to wait patiently before he takes the reins at Manchester United, but not even a lack of a work permit could stop him from visiting the stadium of his new club on Wednesday. The German is waiting for his work permit application to be approved by the Home Office before he officially begins working with the squad.

The 63-year-old has been appointed as interim coach until the end of the season following the sacking of Ole Gunnar Solskjaer on November 21.

But Rangnick will be watching from the stands at Old Trafford to see his new players in action after a delay to receiving his work permit.

According to the Daily Mail, Rangnick must convince the Football Association of his abilities as a football manager in front a special panel for his permit to be granted.

The report claims Rangnick does not meet the FA’s criteria for a Governing Body Endorsement (GBE) because he has not managed a top-flight club in Europe for long enough in the last five years.

The requirement clearly states the manager must be in charge for two consecutively or three years cumulatively.

His GBE will need to be approved by a three-man panel appointed by the FA to give the green light to the exception, with other legal and football figures involved too, before he can be granted a work permit by the Home Office.

Still, the former RB Leipzig coach didn’t let the complication get in the way of his plans as he was taken around the ‘Theatre of Dreams’ for a personal tour.

Rangnick was spotted by a touring United fan, who was also inside the stadium at the same time as the new Man United boss, while he was being shown around.

He can be seen posing for pictures with photographers and speaking with football director John Murtough and club ambassador Wes Brown as he got to grips with his new club.

Caretaker boss Michael Carrick will be in the dugout again of the Man United side for their clash against Arsenal on Thursday evening.

The club are unbeaten in both games Carrick has taken charge of since Solskjaer’s departure, winning 2-0 at Villarreal and taking a 1-1 draw away from Chelsea.

Assuming that Rangnick’s papers are approved this week, his first game in charge is likely to be Sunday’s home fixture with Crystal Palace.

And that means it could be Carrick’s first and final game in charge at Old Trafford, with United in desperate need of three points after falling 12 points behind Chelsea.

But the 40-year-old insists he hasn’t spoken to Rangnick as he has been busy preparing the side for their next game.

“Because of the process and work permit, we haven’t been able to (speak),” said Carrick.

“Literally, I haven’t really got anything to update you on other than the work permit process is ongoing as we speak and I’m in the position as I was for Villarreal and Chelsea getting the boys ready for the game tomorrow night.”

It will be Rangnick’s first job in management since leaving Leipzig in 2019 and the first time he has worked in England, having spent the majority of his career in Germany.

It was recently claimed he was approached by Chelsea with a view to taking the interim job at Chelsea before the club hired Thomas Tuchel. Rangnick also looked to be on the verge of joining AC Milan before the deal collapsed in 2020.

He has since been working with Russian outfit Lokomotiv Moscow as their head of sports development, but felt he could not pass up the opportunity to take over the Red Devils.