A year ago, Manchester United had two of the best performing full-backs in the country in Aaron Wan-Bissaka and Luke Shaw. But as Ralf Rangnick began his tenure as the club’s new interim coach on Sunday, the omission of their names from his starting XI was a reminder of how quickly things can change in football.

After all, Shaw was not named Man United’s player of the season last year for nothing — his form, especially towards the end of the campaign, was nothing short of sensational.

It was also a recognition of the impressive comeback he had made from his darker days at Old Trafford under Louis van Gaal and Jose Mourinho, when he was criticised for being overweight and injury-prone.

The 26-year-old was England’s first-choice left-back at Euro 2020 and chipped in with some vital goals and assists. Having featured prominently and reaching the final, Shaw arrived back later than his team-mates for pre-season.

Perhaps understandably, his form has dropped off since then. Playing catch-up is never easy and the break in between meant the full-back could have lost some momentum.

Ultimately, the Englishman now has a battle on his hands to win back his spot after Alex Telles took his opportunity to impress during his absence through injury.

Likewise, Wan-Bissaka was enjoying the best period of his time in Manchester since arriving for £50m back in 2019 from Crystal Palace.

He made 34 appearances in the Premier League last season, scoring twice and assisting four goals for his team-mates.

Not a bad return for a right-back who was apparently ineffective going forwards, at least according to his critics.

But the 24-year-old has been struggling for some time to recapture his best form from last season and a series of high-profile errors contributed to United’s leaky defensive record.

Indeed, the 1-0 win under Rangnick was only the third clean sheet United have kept all season in the Premier League.

The sight of Diogo Dalot and Telles in the side ahead of Wan-Bissaka and Shaw in the pecking order may have appeared to be a simple continuation from Rangnick of Michael Carrick’s formula, which rendered two wins and a draw in his three games in charge.

Shaw and Wan-Bissaka had played in every match up until the Ole Gunnar Solskjaer’s sacking and their defensive frailties were exposed during their heavy defeats to Liverpool and Watford.

But there are signs that Rangnick is intent on making a clear departure from the Norwegian’s tactics — and that could spell bad news for the defensive duo, according to United legend Rio Ferdinand.

“I’ve got to be honest, Wan-Bissaka has got a hell of a job getting back in this team. The same for Luke Shaw,” Ferdinand said on his FIVE YouTube channel.

“They’ve both got one hell of a job. One thing this manager likes is full-backs who can actually play and get on the ball.

“As well as doing the other stuff like pressing, he wants output with the ball.

“That’s the weakest part of Wan-Bissaka’s game, there’s going to be a big fight for him to get back into this team.”

Wan-Bissaka remained an unused substitute while Shaw has not featured since the 4-1 defeat to Watford, where he sustained a concussion following a clash of heads.

Shaw will be used to the idea of working his way back into a manager’s plans after falling out of favour under Van Gaal and Mourinho.

But under Rangnick, it may be a battle that proves more difficult to succeed in. Telles’ technical abilities are arguably more polished than Shaw’s and that could be key to implementing the German’s passing plan.

Similarly, on the other flank, Dalot has made a significant contribution since coming into the side and few could argue against the Portuguese’s inclusion on merit.

Wan-Bissaka’s inability to press may require some extensive coaching considering the importance the 63-year-old coach places upon retrieving the ball, and it could be some time before Rangnick is comfortable reinstating him at right-back.

With a busy fixture list coming up, the German tactician will have little choice but to rotate his side — and that is where the pair can stake their claim to win back their first-team spot.

But Ferdinand’s warning should be heeded by both Shaw and Wan-Bissaka if they want to avoid being left out in the future.

The demands have changed now that Rangnick has arrived — and the coming months will be crucial in deciding whether they still have a future at Old Trafford. 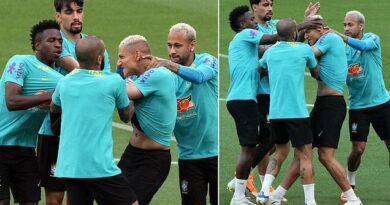 Richarlison and Vinicius Jr SEPARATED by team-mates in training scrap