Even as Ibrox was battered by 55 mph winds and swirling rain, this counted as a modicum of calm for Rangers after the storm of the past week.

Dropping further points was unthinkable. The collapse at Rugby Park that did so much damage to their title ambitions simply had to be followed with a victory.

Anything less and the sense of a season being blown entirely off-course would become overwhelming. 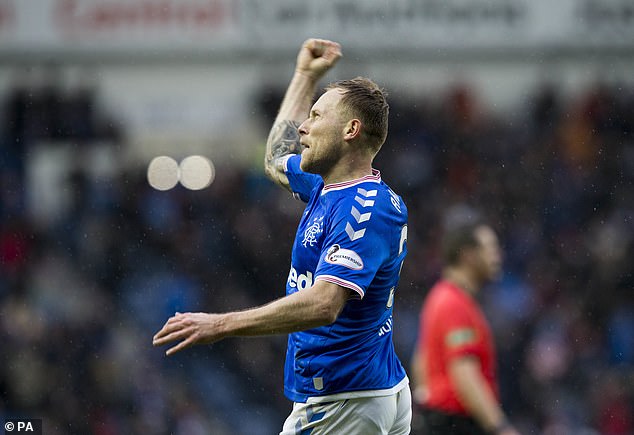 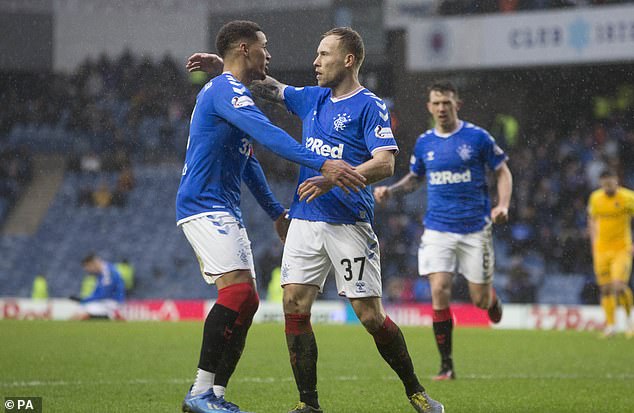 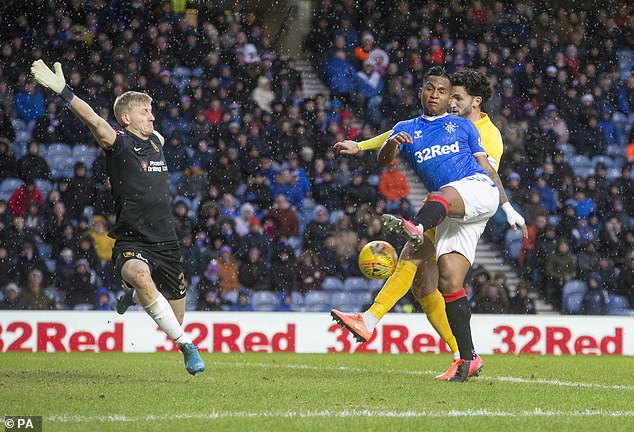 Steven Gerrard’s side did what was necessary. On a pitch passed fit after a postponement 24 hours earlier, they maintained a 10-point deficit to Celtic with a game in hand.

It wasn’t particularly pretty amid the gales. Not always that convincing. Rangers, however, merited a win secured by Scott Arfield’s 59th minute goal.

They had the greater number of chances, often finding Livingston keeper Ryan Schofield in terrific form. Gerrard was aggrieved at an Alfredo Morelos strike being flagged offside while a strong penalty claim for handball was also dismissed by referee Euan Anderson.

Being unable to increase their advantage meant sizeable jitters were endured when Lyndon Dykes struck a post with just eight minutes to play. Had that gone in, the atmosphere inside Ibrox would have turned bleaker than the skies above.

As it was, Gerrard’s men can cling to the stability this result offers as they look ahead to Braga visiting for Thursday night’s Europa League last 32 first leg.

After dropping eight points in six preceding games in 2020, Rangers will have to prove they can successfully grind their way through many more matches before their credentials as championship challengers are re-established.

For now, though, further misery has been avoided. News of Celtic securing a late winner at Pittodrie only served to underline the non-negotiable nature of this assignment. 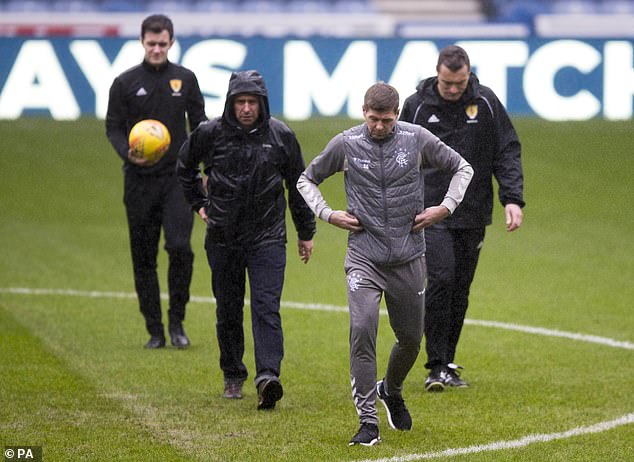 Arfield stepped up with a fourth goal in three games. His potency was gratefully received by Gerrard given that Morelos, while unlucky with the disallowed goal, appears to in the midst of a form dip. Rangers will hope a return to the Europa League – in which the Colombian is top scorer – can revive their talismanic striker.

Livingston had been unhappy at such a quick rearrangement of the fixture, arguing instead for Monday evening. Manager Gary Holt, however, had no complaints about the performance his side produced at shorter notice. They remain fifth.

Gerrard had pointedly criticised his players at Kilmarnock, but opted against wholescale alterations to his starting line-up. Steven Davis being restored to midfield ahead of Joe Aribo was the solitary tweak.

Holt took the opposite approach, making a total of six changes. One of them was enforced, as Rangers loanee goalkeeper Robby McCrorie is unable to play against his parent club. Introducing Schofield was anything but a handicap.

The revamp also led to an intriguing tactical shape. Livingston started by deploying a three-man defence but without clearly defined wing-backs in support. Captain Keaghan Jacobs and Steve Lawson sat just in front of their centre-backs to try and strangle the space available to Ryan Kent and Ianis Hagi. Playing against Holt’s team is never a comfortable experience. 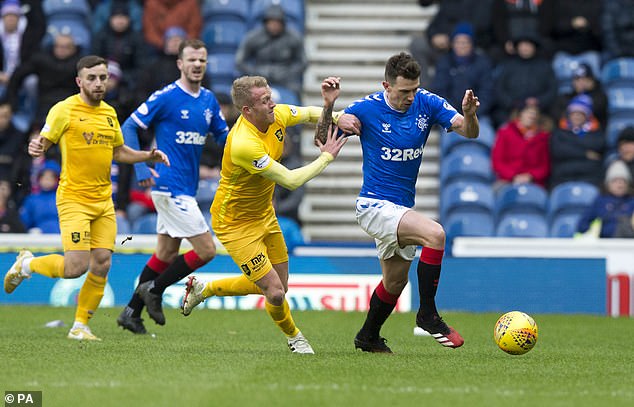 As such, they ensured an awkward opening for Rangers. A couple of long throws from Dykes had already tested the Ibrox backline before one from Ciaron Brown caught the wind to give Aymen Souda a run through the inside-right channel.

The angle was against the French-born Tunisian, with his effort skidding right across the face of Allan McGregor’s goalmouth.

Gerrard’s side were slow in finding much rhythm in difficult conditions underfoot and overhead. Not to mention the tight marking. A first glimpse of threat came on 16 minutes when Andy Halliday headed down a deflected cross from Ryan Jack. Morelos pounced on it, but Schofield – on loan from Huddersfield – managed to stick out a foot and make a crucial stop.

Rangers needed something to disrupt the yellow-shirted array in front of them. Arfield found it by winning possession in midfield before quickly releasing Kent on the left. He drifted inside onto his right foot and wasn’t far away with a whipped, curling strike. Niko Katic then headed over after the visitors failed to clear a set-piece.

Gerrard’s men were having the better of it, but without ever sparkling. Too many wayward passes and slack touches ensured that.

Even so, they would have been in front at the break but for Schofield’s excellence. With ten minutes of the half remaining, the Livingston keeper produced a save to stand alongside just about any seen at Ibrox this season.

Davis drove beyond Jacobs to work a one-two with Morelos and poke a through-ball for Halliday. The left-back connected fine but watched in astonishment as Schofield thrust out a hand that propelled the ball upwards and over the top via a clip of the bar.

What followed six minutes later wasn’t quite so spectacular, but no less important. A slick break from Rangers saw Morelos sweep the ball right for Hagi, who dabbed in on for the supporting Davis. Schofield, though, surged off his line to thwart a thumping drive.

Livingston diced with a dismissal when Jon Guthrie felled Connor Goldson with a distinctly reckless, studs-up challenge as the Rangers centre-back cleared. Referee Euan Anderson, however, reached only for a yellow card. With some justification, several Ibrox players made the point that the punishment should have been worse.

Jack was the victim of a Robbie Crawford challenge that could have brought another booking just after the restart, but it didn’t deter the midfielder from offering some much-needed drive to the home team. His forward surge and pass released Morelos, who slashed wildly off target.

Kent then had a low shot saved by Schofield in what was his last act. Removing the £7 million man for Florian Kamberi was Gerrard’s first substitution. 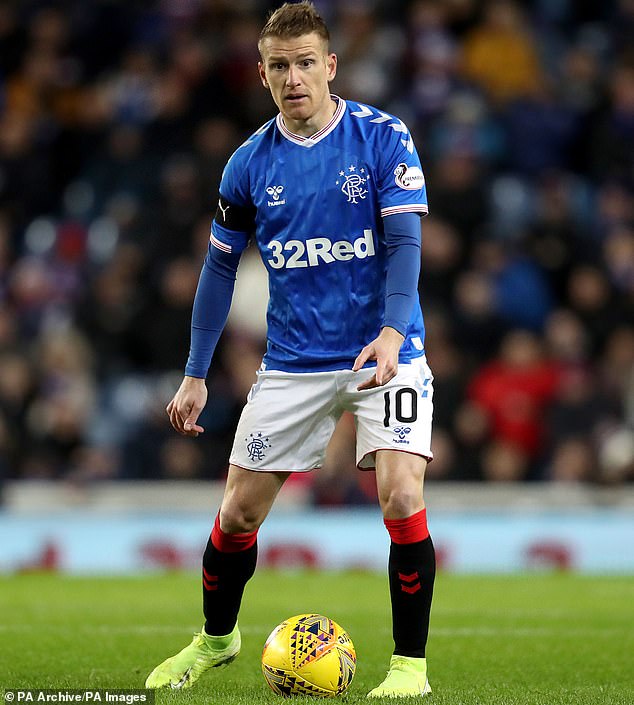 The Hibernian loanee entered just as the game went through a crucial three-minute swing. Livingston almost snatched the lead when a long throw from Brown found its way through to Souda. His hitch-kick was repelled by McGregor at close quarters.

From that scare, Rangers secured a 59th minute advantage. Hagi managed to get his head up and pick out a lovely pass that matched Arfield’s equally opportune forward run. Unmarked at the edge of the area, he fired a low shot under Schofield to prompt a little clenched-fist celebration from a relieved Gerrard.

The home side sought another to remove any doubt. Jack was unable to hit the target after neat build-up play involving James Tavernier, Hagi and Morelos.

A chance to score from the spot could have followed but Anderson somehow ignored Brown’s handball that prevented Connor Goldson from connecting with a Tavernier corner. Then Morelos was dubiously flagged offside when he nicked in front of Arfield to whack an angled finish beyond Schofield and into the corner of his net.

Dykes’ thump against the post from 20 yards caused Ibrox to hold its breath. But, with Kamberi also seeing a strike chalked off for offside, Rangers got over the line.

Arfield stepped up when required with his fourth goal in three games. His potency was gratefully received by Gerrard given that Alfredo Morelos appears to have mislaid his mojo. Rangers will hope a return to the Europa League – in which he is top scorer – can restore their talismanic striker to peak form.

Livingston had been unhappy at such a quick rearrangement of the fixture, arguing instead for Monday evening. Manager Gary Holt would, however, have few complaints about his side’s performance. They remain fifth.

Gerrard pointedly criticised his players at Kilmarnock, questioning their mentality, but opted against wholescale alterations. Steven Davis was restored to midfield ahead of Joe Aribo in the solitary tweak to the starting line-up.

Holt took the opposite approach in the wake of their 2-1 midweek victory over St Mirren, making a total of six changes. One of them was enforced, as Rangers loanee goalkeeper Robby McCrorie is unable to play against his parent club. Introducing Schofield was anything but a handicap.