Stage one of the process to lock down an early Premiership advantage was completed by Rangers without much fuss. For that, they owed some thanks to a very reliable left-back.

While Celtic counterpart Boli Bolingoli’s quarantine-flouting idiocy has left the champions stuck on pause, the excellence of Borna Barisic was crucial to Steven Gerrard’s side fast- forwarding to the top of the nascent table.

An exquisite free-kick and a perfect assist for Ryan Kent helped assemble a two-goal half-time lead despite Rangers not really clicking as a unit. When Joe Aribo glanced in a third not long after the restart, the game was done. Gerrard will count three wins and three clean sheets as a very satisfactory start. 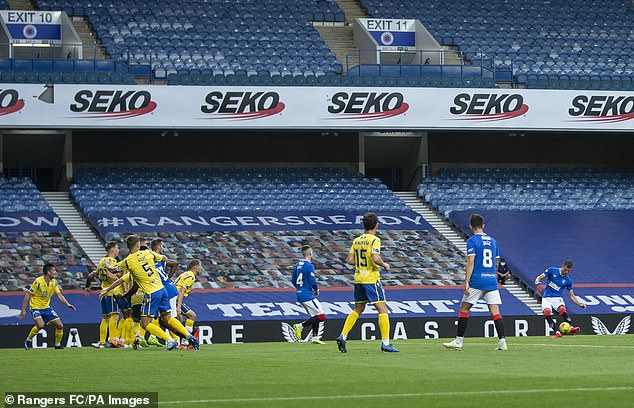 Continuing in a similar vein is essential to maximise the little window of opportunity provided by Bolingoli’s actions. Winning away against Livingston on Sunday and at home to Kilmarnock the following Saturday would leave Rangers 11 points ahead of Celtic before Neil Lennon’s men – who will hold three games in hand – are next allowed to kick a ball in the league.

Placing points on the board is the only surefire way to apply a bit of pressure. While it remains ridiculously early in a campaign that promises to be unlike any other, you still sense Rangers have to grasp every benefit going – whenever they might arise – if they are to ultimately prevent a tenth successive title from being parked at Parkhead.

Ticking off the fixtures will be easier if Barisic’s left foot continues to function so smoothly. For Gerrard, though, there is also now some real depth within his attacking options. 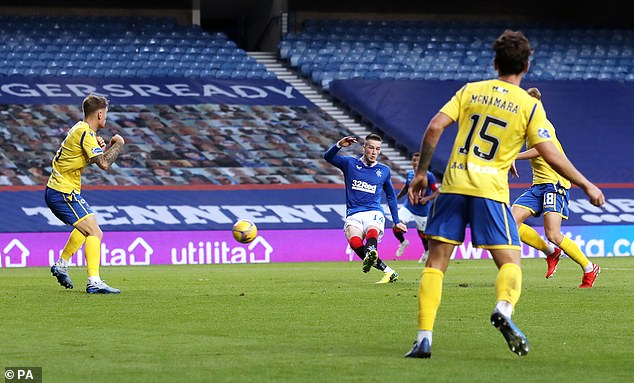 A debut from the bench for Kemar Roofe was among four changes made on the hour mark. In terms of more established players, Kent looks eager to quickly surpass his numbers from last term.

For St Johnstone manager Callum Davidson, this became an evening of frustration. His side had been idle since an opening day draw with Dundee United due to the Aberdeen Eight forcing the postponement of their weekend fixture.

Denied that match-practice, there was still much to admire in the way in the way Saints were initially set up. It took some brilliance from Barisic to break their resistance.

Gerrard had £6 million of new striking talent among the substitutes in Cedric Itten and Roofe, but opted for the same starting line-up as Sunday’s comfortable 3-0 win over St Mirren. The obvious aim was to generate a similarly authoritative performance. 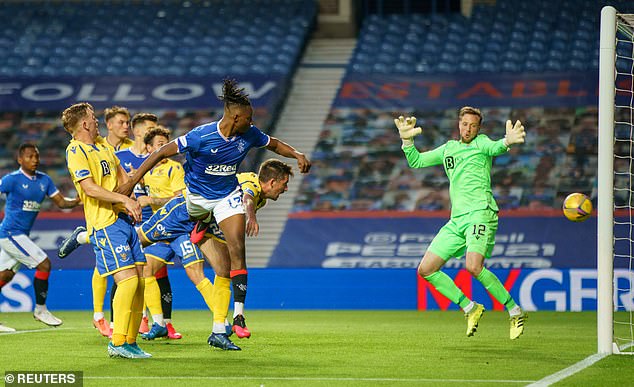 It wasn’t immediately delivered. While Rangers had been on top from the first whistle at the weekend, they were sluggish out of the blocks here. Indeed, St Johnstone could easily have been one up with just five minutes on the clock.

Alfredo Morelos couldn’t find Ianis Hagi, enabling the Perth men to break from inside their own half. David Wotherspoon didn’t waste the opportunity. His spearing pass left Callum Hendry one-on-one with Leon Balogun.

The former Wigan centre-back has impressed in his initial appearances for Rangers, but he was second-best as Hendry twisted him this way and that before angling in a right-footed shot. Jon McLaughlin, still in for the injured Allan McGregor, did well to get down and block with a strong hand.

It was the highlight of a promising early showing from Saints. Set up in a 5-4-1 that released David Wotherspoon and Craig Conway to support Hendry, they were squeezing the life out of Rangers and keeping them well away from Elliot Parish. Kent ambitiously blazed over from a Morelos chest lay-off. 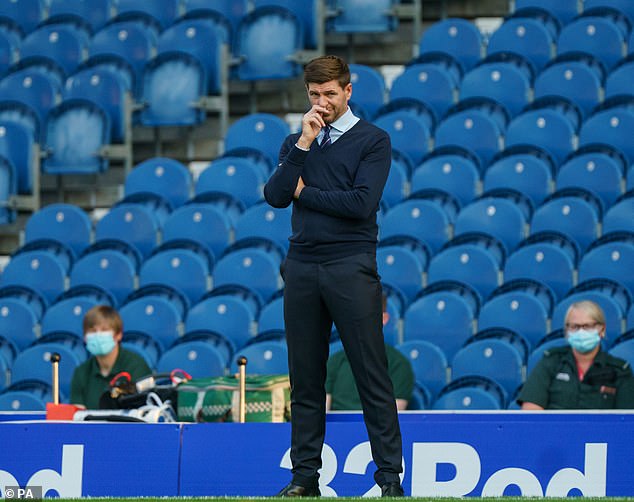 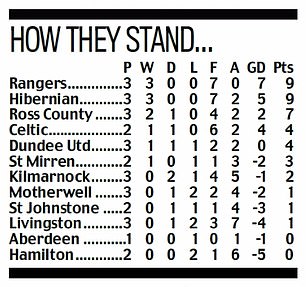 The Ibrox outfit reached 20 minutes without a shot on target. Sixty seconds later, however, they produced one that was unstoppable.

Morelos sought to burrow his way towards the area but was felled by a challenge from behind by Wotherspoon. Twenty yards from goal and right of centre, the free-kick position immediately made Barisic’s eyes light up.

The Croatian full-back delivered in style. Arcing accuracy flew off his left foot as the ball was swept into the top, right-hand corner of Elliot’s goal. The former Dundee keeper didn’t have a hope.

For Gerrard, there was obvious relief in individual class providing an advantage when the collective had yet to function. For Davidson, it must have felt like the cruellest blow.

The breakthrough did spur Rangers into more life, as they began to have possession in the visitors’ territory. A Kent cross almost dropped inside the far post after he darted away from Danny McNamara to deliver.

Even so, St Johnstone’s defensive framework was holding up pretty well. Something slicker was needed to bring the comfort of a second goal. It arrived in first half injury time.

Aribo fed Hagi in the no.10 zone. The Romanian had been denied space and struggled to pick passes throughout the opening period, but this time he was able to sweep one wide left to the onrushing Barisic. The pristine nature of his low cross was matched by Kent’s terrific finish.

It was a second goal in three Premiership games for the £7 million man. Its construction carried echoes of Kent’s Old Firm strike at Celtic Park last season.

Gerrard was forced to replace Balogun with Filip Helander at the break, yet it was the Saints defence that was rapidly placed under pressure as the second half began to unfold.

Ryan Jack found Aribo, who set up a golden chance for Morelos. There was plenty of power in the Colombian’s drive but it lacked real direction and Parish was able to block behind.

The reprieve was painfully brief for Davidson’s men. When Tavernier delivered the resulting corner, Aribo glanced home a header that put Rangers 3-0 in front after 49 minutes gone.

With the points seemingly safe, Gerrard greeted the hour mark with a quadruple substitution. On came Roofe, Itten, Arfield and Davis, with Kent, Morelos, Jack and Aribo making way.

Roofe almost marked his debut with a goal, but his sharp, angled strike late on was repelled by Parish. By then, McLaughlin had pulled off a point-blank save to deny substitute Isaac Oloafe in the visitors’ best chance.

Jurgen Klopp: How Liverpool manager has transformed the club in four years

What channel is the US Open on today? TV coverage, live streams for Friday’s Round 2
F1 News

Workhorse Verlander (aka Mr. Upton) to Undergo Tommy John Surgery; Astros Career May Be Over
We and our partners use cookies on this site to improve our service, perform analytics, personalize advertising, measure advertising performance, and remember website preferences.Ok