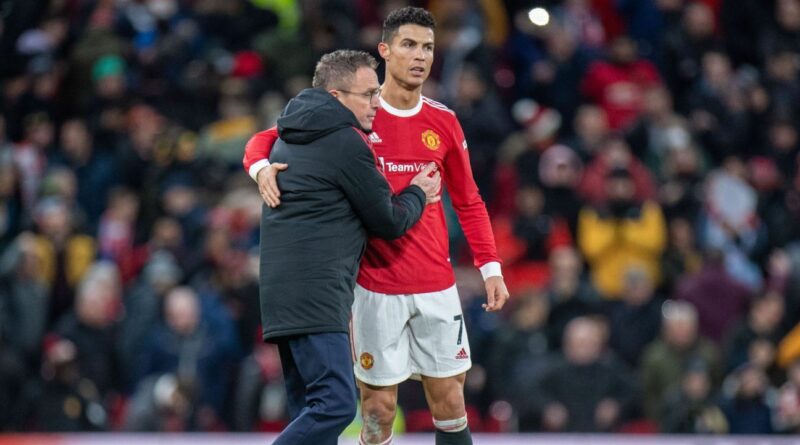 Newly appointed boss Ralf Rangnick hailed Cristiano Ronaldo’s defensive work as his Manchester United reign got off to the perfect start with a 1-0 win over Crystal Palace on Sunday.

The German’s first game as interim manager ended in victory after Fred’s goal late in the second half.

Rangnick said afterwards he was particularly pleased with United’s first home clean sheet since April and singled out Ronaldo for his role in keeping Palace out.

“The way we defended, we had control of the whole game — the clean sheet was the most important part,” Rangnick told the BBC.

“By the way, Cristiano Ronaldo’s work off the ball, chapeau.

“I am very happy with the way the team performed, especially the first half hour, with the pressing, it was exceptional. The only thing missing was the 1-0 or 2-0.

“These are the things we must improve. We need to keep clean sheets. With just the one training session, I was really impressed. We did much better than expected.”

United dominated much of the game but had to wait until 13 minutes from time for Fred to score his second goal of the season with a fantastic effort which sailed into the top corner off his weaker right foot.

The result handed United back-to-back wins for just the second time this season.

“I had to ask my assistant coach if that was Fred’s right foot; I thought he could only shoot with his left,” Rangnick said. “I’m happy for him.

“We always tried to be on the front foot. We were never not apart from maybe the last five minutes. At all other times we were trying to keep them away from our goal.

“It’s always easier to build on things after you’re successful. We must produce further clean sheets and get better at creating chances for our attack. Overall I was very pleased with the way we played today.”

Coronavirus: Pro sport in England could resume from June 1