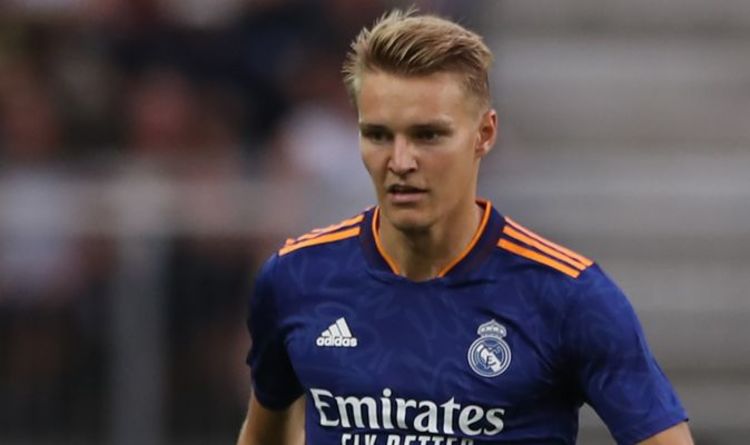 Arsenal are finally set to sign Martin Odegaard from Real Madrid on a permanent basis after months of uncertainty regarding the 22-year-old’s future. He excelled at the Emirates Stadium during his loan spell over the second half of last season and has been Mikel Arteta’s priority target since the beginning of the summer window.

The Arsenal boss made it clear from the outset that a move for Odegaard would be at the top of his agenda before this month’s transfer deadline.

The midfielder was involved for Real Madrid in pre-season upon his return to the Spanish capital, suggesting that Carlo Ancelotti may have been prepared to give him a future at the club.

However, it seems as though he has ultimately been deemed surplus to requirements, with Arsenal now expected to rubber-stamp the move over the coming days.

Odegaard is reportedly poised to sign a five-year deal with the Gunners to keep him on their books until the summer of 2026.

A relatively modest fee of around £30m is said to have been agreed between Arsenal and Real Madrid, with the player now in line to thrash out the formalities ahead of an official announcement.

However, the La Liga giants have moved to protect themselves with the shrewd inclusion of a first refusal clause in the framework of the deal, according to Radioestadio.

It is claimed that Real Madrid will retain this right in the event of a future sale, in which Arsenal would be obliged to notify them if an offer from another club is accepted.

The 13-time European champions would then have the option to match the bid and bring Odegaard back to the Bernabeu for themselves, or pass up the opportunity and allow the other club to progress with the move.

Real Madrid’s decision to negotiate a first refusal clause serves as an indicator of their admiration for Odegaard, who still has plenty of room to develop into a world-class player.

He will compete with Emile Smith Rowe for a starting berth at Arsenal and is likely to emerge as the club’s first choice in the No 10 role.

Odegaard is primed to become Arteta’s fourth summer signing after the arrivals of Albert Sambi Lokonga, Nuno Tavares and Ben White earlier in the window.

Meanwhile, the Gunners are expected to keep trying for the signature of Sheffield United goalkeeper Aaron Ramsdale, who is reportedly valued at around £40m.

Arteta recently spoke of his frustrations in working to push deals over the line, admitting that it has been tricky to fulfil every aim in the current financial climate.

“It has been really busy, and you’ve just named a few names, but that tells you as well how much we’ve had to do from the position that we started the window,” the Arsenal boss told reporters last week.

“We are talking about probably the most difficult transfer market in this industry over the last years for sure and we are trying to adapt.

“The club, the owners and myself, we all have the same interests, which is to make this team much stronger and we know that we still have things to do to get what we want.”

Salah in ‘top three’ players in world, says Elmohamady ahead of AFCON