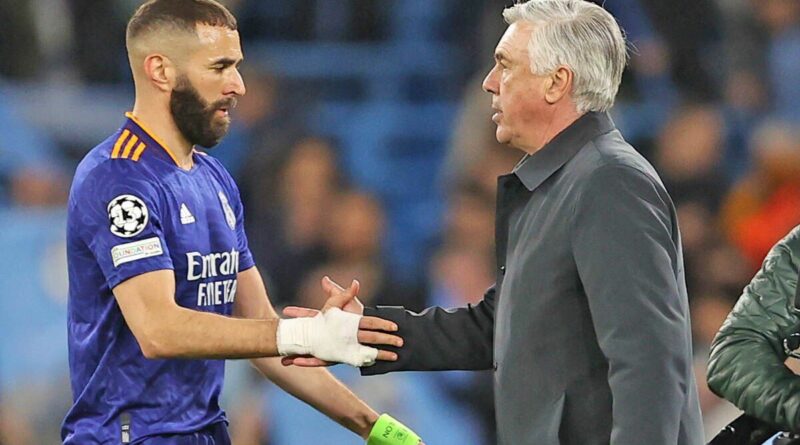 Real Madrid boss Carlo Ancelotti thinks Karim Benzema used a Panenka penalty against Manchester City because his last two spot-kicks ‘were not good’. The France international netted twice at the Etihad Stadium in their Champions League clash on Tuesday. However, it’s advantage City going into the second leg at the Bernabeu on May 4.

Real Madrid and Manchester City played out a Champions League classic on Tuesday night, in a match that had everything.

And Benzema’s Panenka penalty in the closing stages will live long in the memory, with the former Lyon star coolly chipping Ederson to give his side hope of reaching the final.

The 34-year-old has been in outrageous form this term and now has 41 goals in as many games across all competitions.

And Ancelotti has now opened up on his spot-kick following the contest, expressing a belief Benzema changed his style because of his last two efforts.

“I think he changed because the last two penalties were not good,” the Italian told BT Sport.

“He changed and tried in training.

“I did not know how he would shoot. He choose this and it goes really well.

“Strong personality and character. It is not easy in the semi-final of the Champions League to do a penalty like this.”

On the match itself, Ancelotti labelled the contest as ‘fantastic’ and admitted he was hoping to steer his team to victory in the second leg.

“I am a supporter of football of course,” he stated. “It was a fantastic game.

“As manager of Real Madrid I have to take into consideration that we scored three goals, which is really important.

“We didn’t defend well. We can do better. We concede two goals early in the game and then we are able to react really well.

“We kept the game open until the end. Now we have a great dream to play the second game in the Bernabeu and we hope to have the chance to go to the final.

“The first 20 minutes were really difficult but slowly we were able to come back into the game to keep qualification open.

“We need this [some magic] as we are going to play against a really strong team.

“We competed today and we need to do that more in our stadium.”

Benzema himself, meanwhile, insisted Los Blancos would win the second leg and reach the final for the first time since 2018.

“A defeat is never good because we are really excited about the Champions League,” he said.

“The most important thing is we never lay down our arms, we are all in this until the end.

“Now we have to go to the Bernabeu and we will need our fans like never before and we are going to do something magical, which is win.

“I always have it in my head that if you don’t take a penalty, you will never miss a penalty.

“That’s mental confidence and that’s all. I have a lot of confidence in myself… so I do it and it turns out well.”

And Man City boss Guardiola feels his side can be encouraged by the way they ran Real ragged for large spells.

“It was a fantastic game for both sides. All we can do is perform as we perform,” he said.

“The quality of Real Madrid is such they can punish you.

“I say to the players to rest. Leeds now is the most important thing and we go to Madrid to win.

“Both teams want to attack and have the quality to play. Football is a fantastic spectacle.

“Congratulations to Carlo and his team as they are so good. At the same time, we saw ourselves that we can be there.” 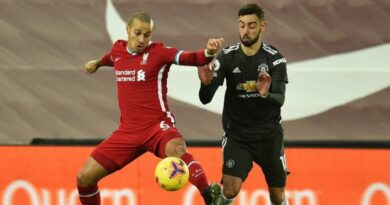