Home » Soccer » Real Madrid next manager: Pep Guardiola admits it is no surprise Mauricio Pochettino is in the frame

Pep Guardiola believes it is no surprise that Mauricio Pochettino is being linked with Real Madrid, having become an elite level manager at Tottenham Hotspur.

Guardiola’s Manchester City meet Tottenham at Wembley on Monday night amid speculation that Pochettino could replace Julen Lopetegui at the Bernabeu.

Pochettino began his managerial career at Espanyol – where he came up against Guardiola’s Barcelona nine occasions, winning once and drawing on another three occasions.

The Argentine then impressed enough in an 18-month spell at Southampton to be appointed by Tottenham, who has since guided to three consecutive top-four finishes.

Guardiola believes Pochettino has proved himself to be a coach of the highest order and warned Madrid that if they wish to appoint him, Tottenham chairman Daniel Levy will be reluctant to let his manager leave.

When asked whether the Tottenham manager was one of the ‘next’ elite-level managers in world football, Guardiola said: “I think he is already a top coach, not next.

“For many years, he is training at a high level. He did an incredible job at Espanyol and Southampton and especially here at Tottenham.

“I have a lot of respect of the job he has done in his career so he is already a reality as a manager, no doubt.

“He has been linked many times, with Real Madrid. He can answer that question but I don’t know what happens. What I think is Mr Levy is not an easy guy to negotiate with.”

Guardiola infamously described Tottenham as “the Harry Kane team” last year, appearing to suggest that Pochettino’s side are too reliant on the striker.

Pochettino accused his counterpart of being disrespectful and, with Tottenham just two points behind City ahead of Monday’s meeting, Guardiola admitted he was wrong to use the term.

“They show me how wrong I was,” he said. On the importance of Monday’s match, Guardiola added: “When you play against the contenders it’s almost six points, isn’t it? These are important.

“I don’t know what’s happened in the past but it’s true that the strong teams are making a lot of points, they are not dropping points easily. That’s why maybe the games against the contenders are becoming so important.

“We’ve started with three games away against them. That’s why it is so important to take those points.“ 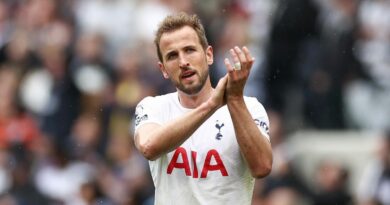