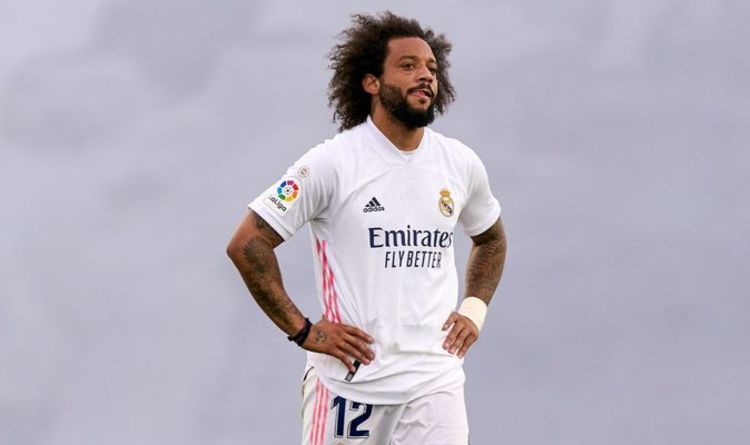 Real Madrid captain Marcelo wants to stay at the club ahead of the 2021/22 season, and his desires have been accepted, according to reports. It comes as a blow to Everton, reportedly looking to sign the 33-year-old left-back this summer.

Entering his 16th season as a Real player, Marcelo has had a less prominent role in recent years.

With Mendy injured until the end of July, though, Marcelo has the chance to impress new manager Carlo Ancelotti during pre-season.

According to Mundo Deportivo, Marcelo has decided to fight for his place, and Real have respected his decision, given his esteemed status.

After Zidane even preferred youth star Miguel Gutierrez over the 33-year-old last term, he reportedly looks to make a clean slate under Ancelotti.

Marcelo’s contract expires in 2022 and is unlikely to be renewed, so Everton may be able to try and lure him to Merseyside this time next year.

However, the Toffees have suffered a blow in their interest, with Real’s legendary left-back intent on staying in the Spanish capital for now.

Speaking to the club’s official website a few days ago, Marcelo stated his excitement to start the new season as captain.

“It is a great pride and responsibility to be the captain of the best club in the world,” Marcelo explained.

“I feel lucky. Just to know that I am from Real Madrid, I wake up every day with a lot of desire. Every season that comes, I am more excited.

“I’ve been here for a long time, but the illusion has never changed; it has always gone beyond.

The Toffees have one of the Premier League’s best left-backs in Lucas Digne, who will look to impress again this season.

Marcelo would have been the Frenchman’s back-up, a role he perhaps was more interested in filling in Spain than in England.

This campaign will likely be the Brazilian’s Los Blancos swansong, which would leave the door open to a future switch.

For now, Everton’s chances of signing Marcelo should be considered nil.