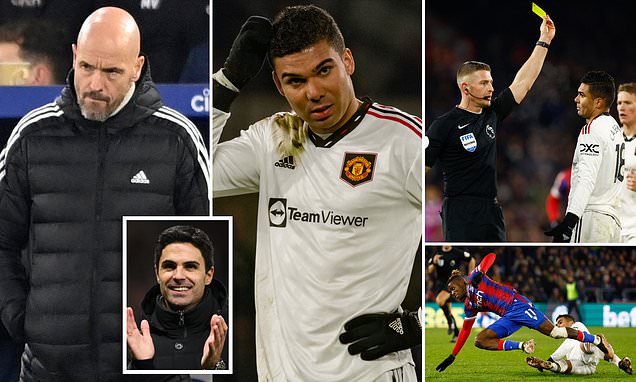 ‘I can see Mikel Arteta dancing around his living room’: Jamie Redknapp says things ‘couldn’t have gone any worse’ for Man United after Casemiro’s yellow rules him out of Arsenal clash… as Brazilian FUMES at Bruno Fernandes

Jamie Redknapp claims losing Casemiro to suspension for their crunch Premier League clash with leaders Arsenal on Sunday meant their 1-1 draw with Crystal Palace ‘couldn’t have gone any worse’.

The Brazilian midfielder picked up his fifth booking of the season when he brought down Palace attacker Wilfried Zaha in the 80th minute at Selhurst Park – in a huge blow to manager Erik ten Hag after squandering all three points in the last minute.

The £70million summer signing, who has been crucial to United’s success so far this campaign, will now be forced to miss out on their pivotal trip to north London on Sunday. 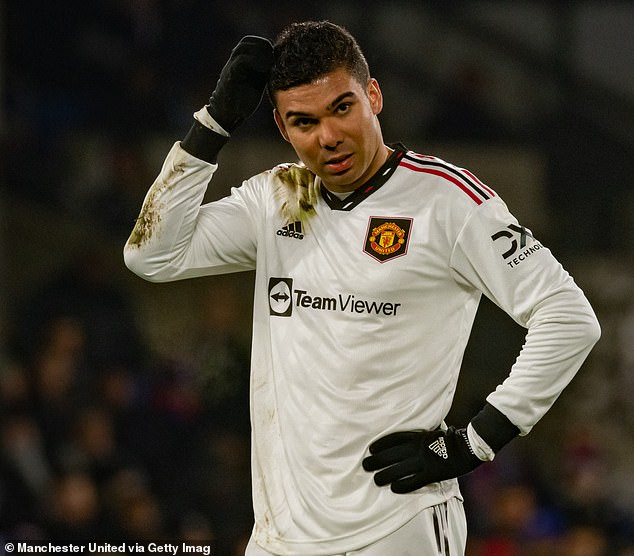 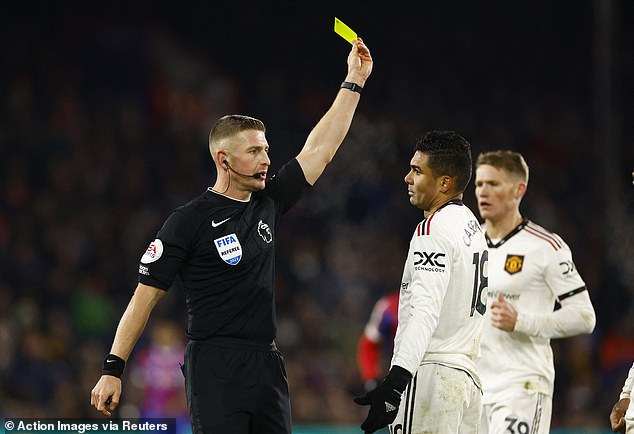 Pundit and former midfielder Redknapp feels the loss of Casemiro for Sunday’s clash is a huge blow, even more so than missing out on the chance of moving up to second in the league table on Wednesday evening.

‘From Man Utd’s point of view, it couldn’t have gone any worse,’ Redknapp said post-match on Sky Sports.

‘We spoke before the game about Casemiro. Don’t get booked. Don’t get into any confrontations. It was so important because they need him on Sunday. 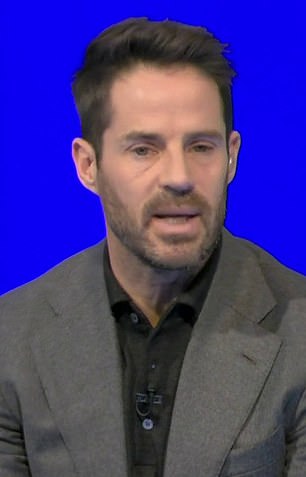 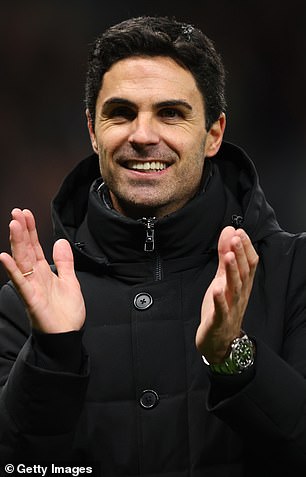 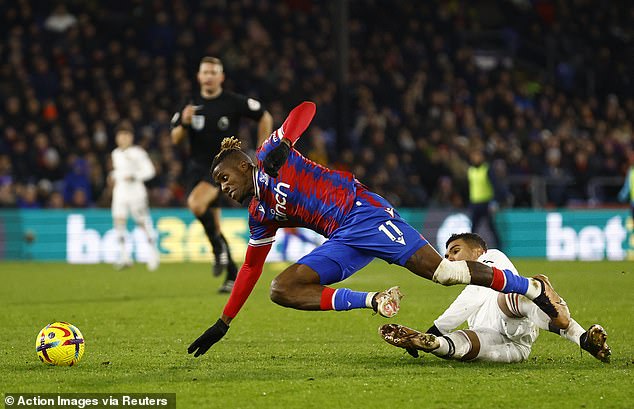 ‘When he got booked in the 80 minute, it was like the steam was completely taken out of Manchester United.

It affected them so much. They knew that there most important player, in that defensive role, was missing.’

The former Real Madrid defensive midfielder appeared frustrated with his team-mate Bruno Fernandes after being booked for his challenge on Zaha.

Redknapp added: ‘It was a moment of madness. You could see Casemiro was furious with Bruno Fernandes, who jumped out of a (previous) challenge. 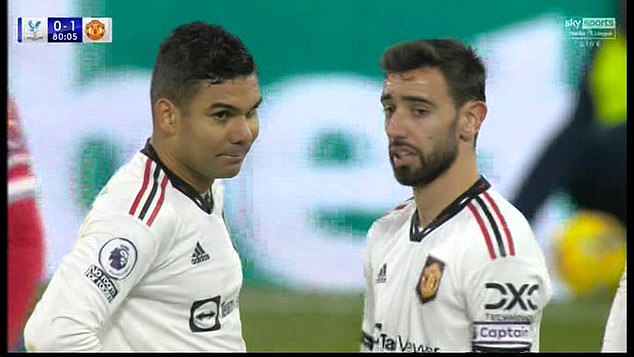 ‘That’s why he ends up one-on-one with Zaha and he gets booked. It could have been a red card. It’s a scandalous challenge. It’s reckless.

‘I could just see Mikel Arteta when that happened dancing around his living room because he is so important to Man Utd. They have got no-one who can do what he does in the team.’

United boss Erik ten Hag also spoke about Casemiro’s suspension and is still backing his side against the Gunners, having beaten them 3-1 at Old Trafford earlier in the season without their star man.

‘I think it’s instinctive. He missed the ball. It’s quite clear it have been a dangerous situation. He wanted to stop it and that was his reaction.

‘The last time we beat Arsenal without Casemiro so this time we need to do the same.’

‘Big blow to lose Casemiro for Sunday. I don’t get it why Arsenal don’t play as we have to play in the same week and they don’t. 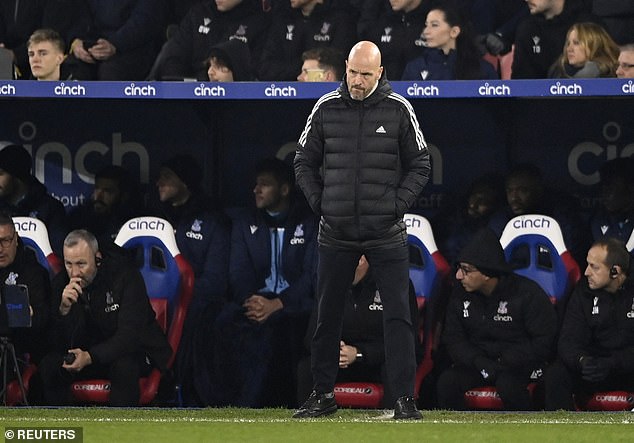 ‘Now we are missing one of our best players. I don’t understand. Now we miss him for a big game and it is a big loss for us.’

Redknapp re-iterated that Arsenal have benefitted massively with Casemiro’s suspension, leaving United with some tough decisions to make ahead of the clash, in order to compete with the Gunners midfield trio of Granit Xhaka, Martin Odegaard and Thomas Partey.

‘I said before the game if he was to be booked and to miss that game. He is so important.

‘They’re going to have to bring in Fred or Scott McTominay. If you look Arsenal at the moment with Odegaard, Xhaka and Partey that midfield is functioning so well.

‘I can only really see it benefitting Arsenal in such a huge way. They’ve got so much confidence right now, which makes them red hot favourites, he’s such an important player not in the Premier League.

‘Certain teams function so well and that is what he offers them. He senses danger and they are going to miss him so much for what he brings to the team. For Arsenal it’s exactly what they wanted to see today and it’s big news for them.’ 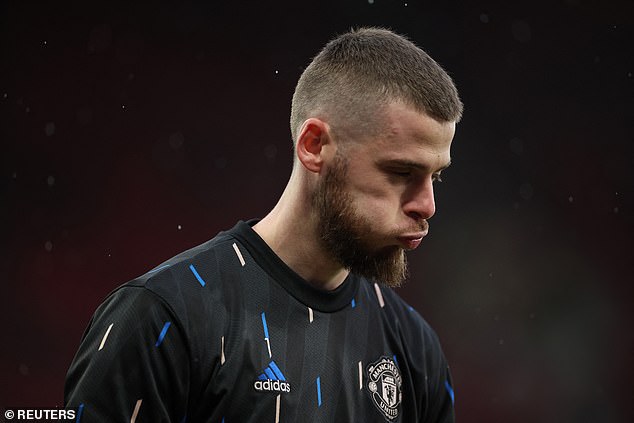 Former Tottenham and Liverpool man Redknapp also denied that United were ever really in the title race after slipping up at Selhurst Park, let alone still in the hunt.

‘No, I don’t. I didn’t really believe it before the game as i still think they’ve got so much to do, but the progression that they’ve made has been astounding.

‘The job that he has done, the culture at the club has changed and they look like a real force again.

‘I’m sure they’re only going to get better and better. I think the title is a bit too far away because of the poor start that they had, but i think it’s important that they just keep this momentum up.

‘They’re full of confidence. There is no reason why they can’t go to Arsenal and get a result, but it makes it so much harder without Casemiro.’