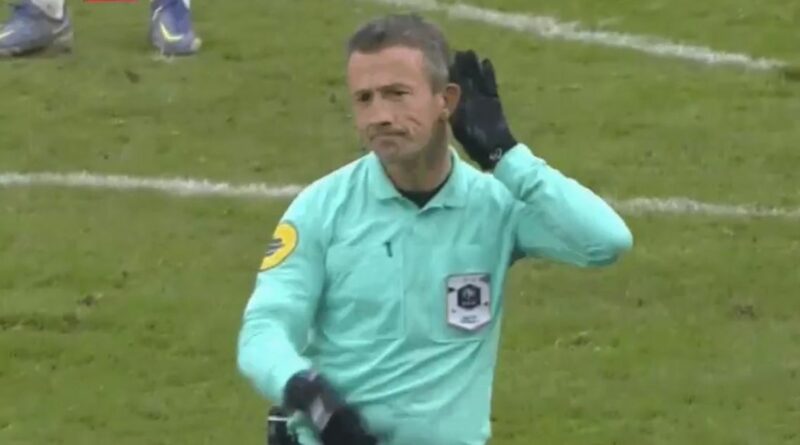 A referee in France has cupped his ear at fans shouting abuse towards him and egged them on in the final minutes of a match he was taking charge of.

Jérôme Miguelgorry was the man in the middle for Ligue 1 side RC Lens’ visit to fifth-tier Stade Poitevin in Group B of the round of 64 of the Coupe de France on Sunday.

But Miguelgorry did not make many friends at the Stade Michel-Amand with his performance, blowing up for 10 fouls against the hosts.

It was a frustrating afternoon for Poitevin, who ran their top-tier opponents very close, with only Ignatius Ganago’s strike eight minutes before half-time separating the two sides.

The referee dealt a severe blow to their chances of getting back into the game just a minute after Ganago found the back of the net.

Poitevin midfielder Cesar Neto went in with a high-foot on Lens attacker Corentin Jean, which earnt the home star a straight red-card for violent conduct.

Some believed that sending off was harsh on Neto, with Miguelgorry’s performance continuing to anger the home crowd.

And an incident as the game entered injury time led to them making their feelings towards the official clear.

Who do you think is the best referee in the Premier League? Let us know in the comments section…

Poitevin keeper Paul Cattier had kicked out at Christopher Wooh after being fouled, which prompted a small scuffle.

Miguelgorry opted to award a free-kick in favour of Lens, to the fury of the home crowd, who began chanting “f*** the referee”.

In response to those chants, Miguelgorry could be seen cupping his ear to the supporters and raising his hand in the air to signal them to sing louder.

The referee only showed three cards across the clash, the red to Neto and one yellow card to each team.

Lens were able to see out the one-goal win to set up a round of 32 clash with fellow Ligue 1 side Lille at the start of January.

Premier League restart: How to get Sky Sports to watch the action

'I'm proud to be Ireland's first black player' – Chris Hughton, 40 years to the day since his debut in green