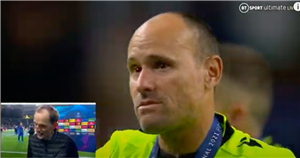 Antonio Mateu Lahoz, the referee of the 2021 Champions League final, was spotted in tears after he had blown the full-time whistle on Saturday evening.

Kai Havertz's opener just before the interval was the only goal of the final as Chelsea swept aside Manchester City – preventing a City treble – in a solid defensive performance.

Lahoz received widespread praise for his performance; he was stoic in his decision on a City penalty claim that could have seen the Citizens level.

And following the match, Lahoz was unable to contain his emotions as he blew the full-time whistle one last time before retiring.

“Honestly, I never really imagined that, one day, I would referee a Champions League final," the Spaniard told UEFA before the final.

"Refereeing is happiness for me, and I think the key to being a referee is to always be yourself. When you referee a match, you're taking charge of many different personalities. You’re part of the game.

“It’s good to pass on the experience that you’ve gained to younger referees. I like helping my colleagues in this way.”

Lahoz isn't quite finished yet; in a couple of weeks time, he will be part of the refereeing team to oversee the Euro's – before he hangs up his whistle for good.

He also admitted a return to the sport would be unlikely, however, when he calls its quits in the summer.