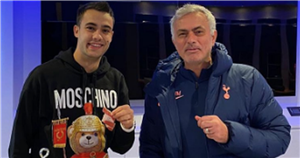 The Spanish full-back was even bought a luxurious gift of a suckling ham by his Tottenham manager after he told him he would be alone.

But new pictures have emerged showing Reguilon risks losing the trust of his manager – after spending Christmas with a large group.

Their actions have been strongly condemned by both Tottenham and West Ham.

Reguilon was named on the bench for Spurs' game against Leeds United on Saturday afternoon after the pictures emerged.

Both Lo Celso and Lamela were left out of the squad.

Lanzini played for West Ham on Friday night, coming off the bench in the 1-0 win over Everton.

Speaking to Spanish press, Reguilon said of Mourinho this week: "For example on Christmas day, he knows that I am alone.

"We got to training on the 25th at 3pm and I had a box on my seat. I open it and it was a suckling pig already cooked.

"He told me, 'I know you are alone at Christmas so you don't have to cook dinner and eat well'."

A Tottenham statement on the breaking of rules said: “We are extremely disappointed and strongly condemn this image showing some of our players with family and friends together at Christmas…

"Particularly as we know the sacrifices everybody around the country made to stay safe over the festive period.

"The rules are clear, there are no exceptions, and we regularly remind all our players and staff about the latest protocols and their responsibilities to adhere and set an example.

"The matter will be dealt with internally."

West Ham released a statement of their own on Lanzini's actions, writing: “The Club has set the highest possible standards with its protocols and measures relating to Covid-19 so we are disappointed to learn of Manuel Lanzini’s actions.

“The matter has been dealt with internally and Manuel has been strongly reminded of his responsibilities.”

Racism in football at a ‘tipping point’ after PSG vs Istanbul Basaksehir and Millwall incidents, says Rio Ferdinand