Home » Soccer » Return of the king: How Cristiano Ronaldo has changed since Manchester United exit in 2009 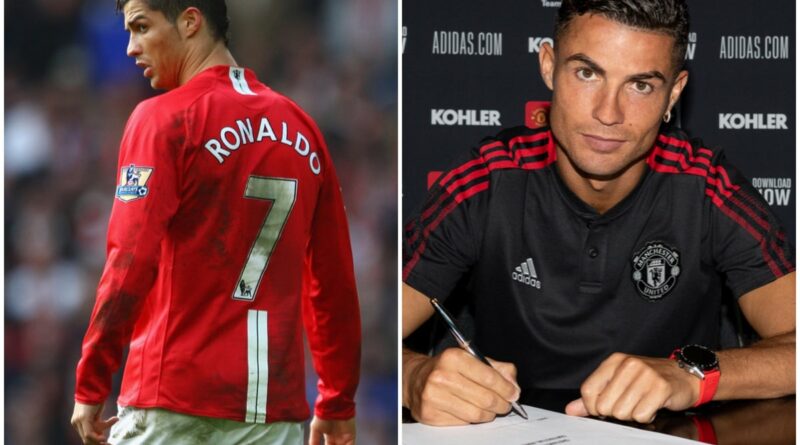 Cristiano Ronaldo has returned to Manchester United 12 years on

There was a buzz among the Manchester United players as they returned to the training ground, one that Cristiano Ronaldo has already made his own again. For the Portuguese, Carrington is still his old home. He has reportedly walked back in “like the king”. For his new teammates, there has been excited talk about the opportunity to play with “one of the greatest ever” and “a living legend”, as the descriptions within the England camp went.

Some of those at United’s training ground were naturally trying to spot whether he’s changed at all. Others have stayed in touch through the last decade. Ronaldo is still friends with the adult children of one club official and regularly used to send them pictures of his outfits for fashion advice.

All look at him now as a very different figure and player to the one who left in 2009.

Back then, he was the new Ballon d’Or winner, and briefly the best player in the world. Now, he has a claim to be the greatest of all time, having won more modern Champions Leagues than anyone else in history. It was only last week he made himself the highest ever international goalscorer. He possesses all the self-assurance that comes with all that and then some. While Ronaldo wasn’t exactly shy when he left, such achievement is itself transformative.

Those who work on the business side of the game describe him as a “commercial behemoth”, with a marketing power beyond anyone else in football. This directly informed United’s decision to bring him back, but primarily because they knew the immense benefits Manchester City would accrue if they managed to sign him. We’re a long way from the days when a more adolescent-looking Ronaldo was marketing the Suzuki Swift hatchback and lesser known suitcase brands.

Saturday’s match against Newcastle United is set to be a global media event, maybe the biggest in the Premier League outside a title race since the first Manchester derby between Pep Guardiola and Jose Mourinho in 2016.

For many outside the game, any discussion of the 36-year-old is complicated by the rape allegations made by Kathryn Mayorga. The view is that all of this should be much more muted – not least the celebratory reaction to his signing. Las Vegas prosecutors confirmed in 2019 that the Portuguese would not face criminal charges as the allegations could not “be proven beyond reasonable doubt”. Mayorga is still pursuing a civil case.

Ronaldo has strenuously denied the accusations.

By coincidence, it was shortly before his last match at Old Trafford – the Champions League group game between Juventus and United in October 2018 – that Mayorga went public with the accusations. Ronaldo did the press conference before that game, and directly addressed the reports.

“I am a happy man. We did the statement two weeks ago if I’m not wrong. I am glad of course, I’m not going to lie in this situation, I’m very happy. My lawyers, they are confident and of course I am too.”

Manchester United declined to comment on the current circumstances of the Mayorga case.

Much of Old Trafford sang his name on that 2018 night, which ended up a 1-0 defeat to Juventus.

All of Old Trafford is set to raucously cheer him on Saturday, and the widespread belief around the club is that this will spark a new era of glory. Ronaldo naturally returned to the stadium already this week, to take it in and film a post for the club’s social media. 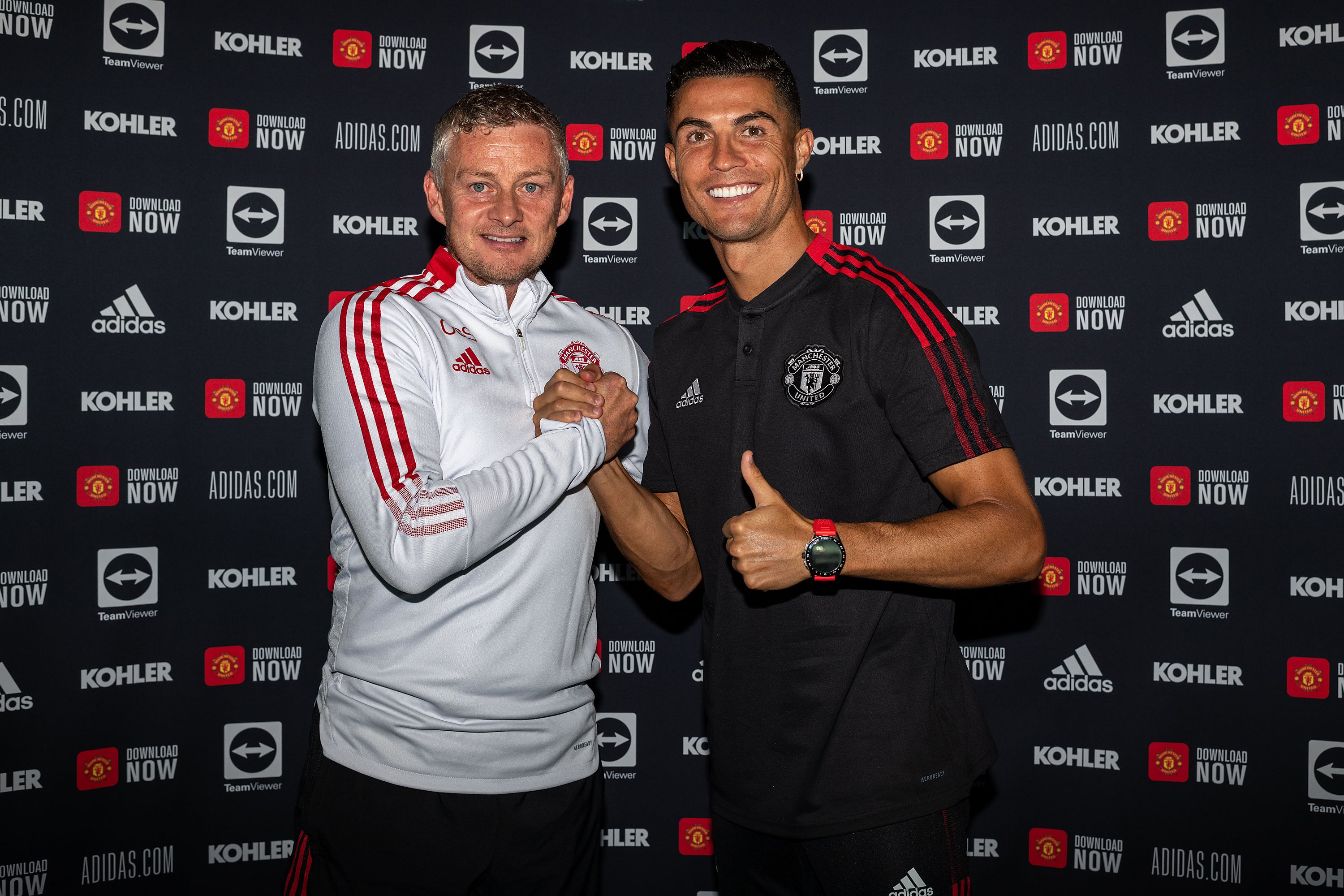 Since the 36-year-old was suspended for Portugal’s match away to Azerbaijan, he returned from international duty early, which allowed a lot of time to talk with Ole Gunnar Solskjaer.

The Norwegian is among a few people who has been at United right through Ronaldo’s time there, so can speak with authority on his evolution.

Solskjaer was a teammate as Ronaldo went from gangly and erratic teenager in 2003 to an elite powerhouse in 2007, a forwards coach as the player reached new levels between 2008 and 2009, and is now his manager in 2021.

That provokes one of the more interesting football questions from Ronaldo’s transformation since he left United. Back in 2009, he had never played under a senior manager he didn’t see as a paternal figure. There was only Felipe Scolari as well as Carlos Quieroz with Portugal and, above all, Sir Alex Ferguson with Manchester United.

Ronaldo wouldn’t have dared to do with them what he did with Maurizio Sarri at Juventus training, which was petulantly kick a ball away while declaring “this is shit”. Many in the game are intrigued by what his relationship with Solskjaer will be like, especially since this is the first time he has been managed by a former teammate.

Pretty much all of his other former United teammates believe the biggest change in Ronaldo is his ultra-competitiveness. They could see it growing in the years before he left, but it was nothing like it is now.

It is the assurance that comes from having done it all, rather than the eagerness that drove him to get there.

An indicative story comes from one new signing’s first day at the club in that 2003-07 period. The player went into the gym at Carrington after a session, to find Ronaldo there on his own. As the Portuguese started to do sit-ups on an exercise ball, he suddenly turned to his teammate and simply declared “I’m going to be the best player in the world this year”.

A single-mindedness had developed from an initially erratic performance level. The words from Ruud van Nistelrooy in 2006 criticising him for being so wasteful had stung, but had also struck a chord. Ronaldo realised the Dutch striker was right.

“When he left us, it was an obvious change in him in terms of winning mentality and a desire to be the best,” Rio Ferdinand tells The Independent. “It was the desire to decide games, whether it be in training or a Premier League match or in the Champions League. His mentality and this idea about being the best had definitely grown, and that continued at Real Madrid and at Juventus.”

Ronaldo reached a career peak at the Bernabeu, when this mentality coalesced with his physical prime to produce one of the most prolific forwards to ever play the game.

United did experience this at his other return to Old Trafford, with Madrid in the 2012-13 Champions League. Ronaldo scored a more poacher-like goal, to finish of Ferguson’s career in the competition. He had of course helped burnish that career by winning the trophy in 2008. 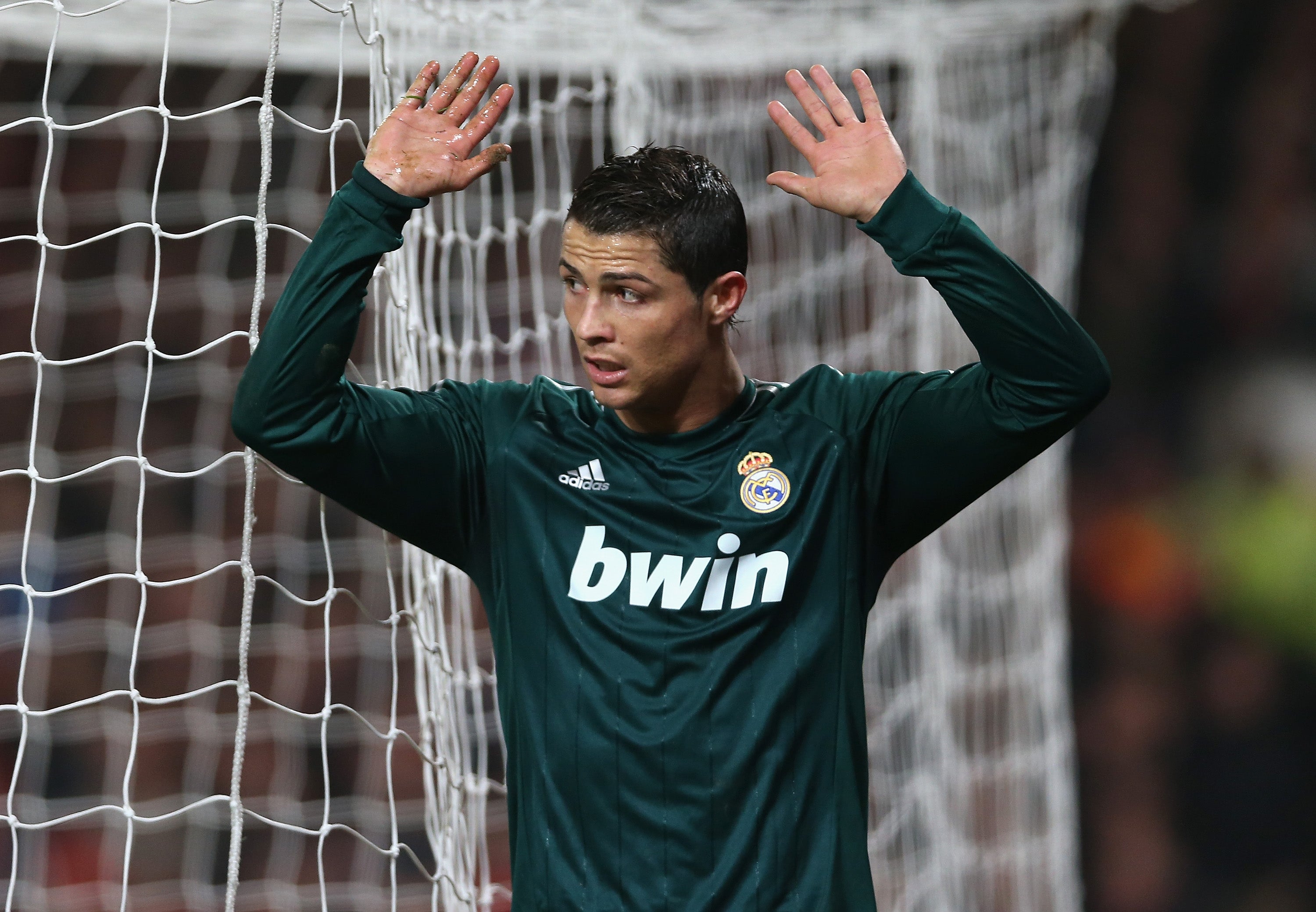 One of the most awesome sights in football at that point was Ronaldo thundering in off the left at full pace, retreating defences unable to keep up with him or handle him. This was what had first started to be seen in the 2007-08 season at Old Trafford.

Back then, Ronaldo wasn’t so big a figure that he escaped dressing room banter. The truth was that the United group used to savage him. Teammates tore him apart over his teeth and his hair as well as his desire to go to Real Madrid. When Rafael van der Vaart signed for the Spanish club in 2008, Ronaldo walked into the United dressing room to find a white shirt with the Dutch player’s name on it. He did see the funny side, and actually quite enjoyed being mocked as it was part of the spirit.

Some would mock him in more subtle ways. It was said at Madrid that any Ronaldo strop could be defused by telling him he was handsome.

While the opinion of his personality is more mixed than might be expected, and a minority thought he was “a dickhead”, many teammates had a good relationship with him.

Ronaldo could be encouraging if he noticed some were having issues. He could also needlessly barrack teammates for taking a decision on the pitch that didn’t serve him.

It was because of this public prima donna image that sources say there was an attempt early in the last decade to change the perception of Ronaldo. More stories were put out about his charitable work. The people around him realised his image needed to be softened.

The Mayorga allegations then arrived in 2018. They are the most relevant elements for many outside the game.

Within the game, the reality is they are not even mentioned. That could be seen in the last few weeks. It might even speak to the general attitude towards allegations of this nature in football. Ronaldo’s status as a player trumps all.

His style as a player has greatly changed, and that is probably most relevant to the future of United as a team.

Ronaldo had already become a more physically restricted player by the time he moved to Juventus, where ongoing knee issues meant he conserved his energy for key moments in key areas. In other words, the service for goals.

United are actually getting a very different Ronaldo in that regard, one that is almost the completely opposite type of attacker to the winger he started as. 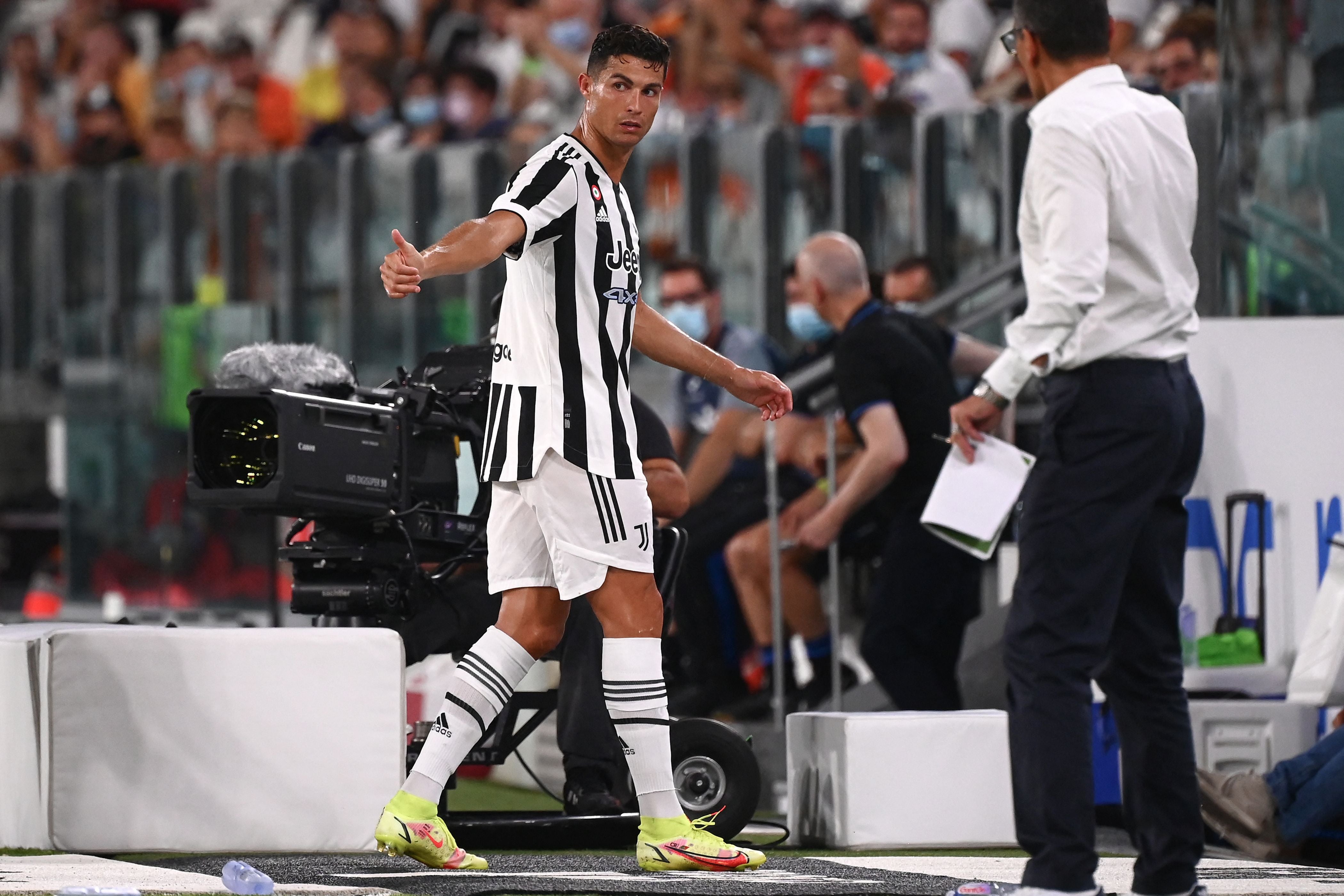 Cristiano Ronaldo came in for some criticism at Juventus

This ended up being a criticism of Ronaldo at Juventus, because it limited the way they could play. The argument was it made them more predictable, even if it was also predictable that the forward would finish most of the chances that came his way. One key difference is that Juventus were trying to develop a different style, which was why the signing of Ronaldo ended up surprising.

The view from Ferdinand and those at United is that he will just slot right into the team’s structure as the number-nine. It will just be a nine that is a more fixed focal point, with more built towards him. Ronaldo is no longer as mobile as Edinson Cavani, for example. It will also affect the hierarchy of the forward options. There is a belief it may force Paul Pogba back into the central two, just to try and accommodate more talent, but that itself can unbalance United.

Solskjaer still wants a central midfielder, but they couldn’t get the right player at the right price for the remaining budget. While a fair question is why United diverted some of that budget to a signing they didn’t strictly need, that isn’t really the case. Repeated sources say the club have struck a good deal on Ronaldo, both in relation to the structure of his wages and the structure of the payment.

Solskjaer is said to believe that, ultimately, the Portuguese gives United a better chance of winning.

If so, it’s one thing that hasn’t changed.