The 18-year-old forward made his USMNT debut last Thursday against Wales and is regarded as one of the most promising talents in the Bundesliga.

– Stream new episodes of ESPN FC Monday-Friday on ESPN+
– Stream Bundesliga all season long on ESPN+
– Take our quiz: Which Bundesliga club should you support?

Sources told ESPN there was interest in Reyna from the Premier League and La Liga, but he was focused solely on continuing his career with Dortmund.

“BVB are a big club that can challenge for titles and are in all the important competitions,” Reyna said. “Young players in particular have the chance to develop here.

“I have already learned a lot in Dortmund and I want to learn a lot more in future. I look forward to being with BVB in the long term.”

Reyna signed an initial three-year deal when he agreed to join Dortmund from MLS side New York City in November 2018. He arrived at BVB in July 2019 and went on to make his debut in February 2020.

He has been an ever-present this season, making 12 appearances for Dortmund, scoring twice, and contributing five assists.

“It’s a great thing for Borussia Dortmund to have a player like Gio, he has a lot of potential,” coach Lucien Favre said at a prematch news conference on Friday. “If he continues like this, then he’ll be an extremely important player for BVB throughout the future.”

Sporting director Michael Zorc added: “Gio’s development in recent months has been incredible. He will definitely be an important part of Borussia Dortmund’s sporting future.

“I am personally very pleased that he has decided to extend his contract with BVB in the long term with complete conviction.”

Reyna is part of Borussia’s highly rated bunch of young attackers along with Jadon Sancho and Erling Haaland.

Reyna’s debut for the USMNT was due to happen earlier this year, but the fixture schedule was interrupted due to COVID-19. Reyna has now followed in father Claudio’s footsteps in playing for the USMNT. 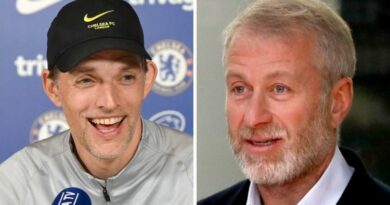 Chelsea board and Thomas Tuchel in agreement on ‘untouchable’ transfer demand