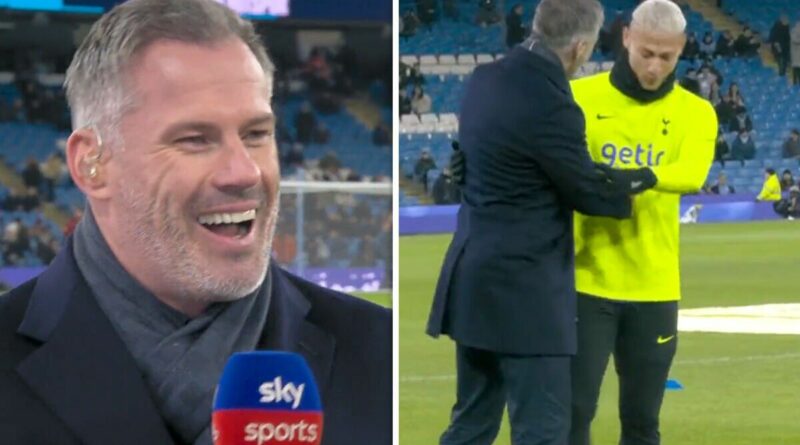 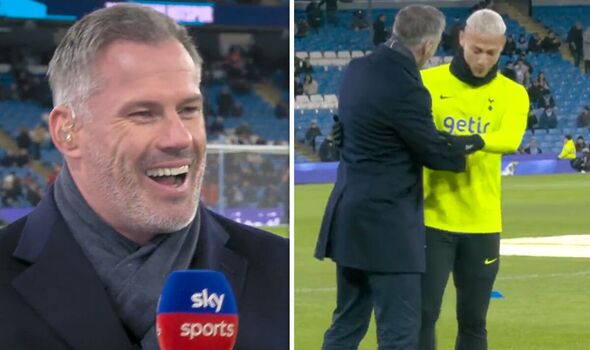 Tottenham striker Richarlison seemingly ended his feud with Jamie Carragher by apologising to the Liverpool legend. The pair have not always seen eye-to-eye but shared a hug on the Etihad pitch ahead of Spurs’ match against Manchester City on Thursday.

Carragher and Richarlison have clashed several times in the past. The forward has not taken kindly to the former defender’s opinions on him while commentating on his performances.

However, it appears they have now buried the hatchet. Richarlison was named on the bench for Tottenham’s game at City, with Carragher on punditry duty.

Sky Sports broadcasted the start of the match from the side of the pitch. During the pre-match warm-up, Carragher invited Richarlison to play some one-twos with him.

After a few passes back and forth, the duo hugged and spoke briefly. Presenter David Jones joked about their past and said: “Well the news from Manchester is that Spurs have a secret weapon in their warm-up.

“Look at this, a sprightly figure emerging from the studio. And the rumours of a feud between Jamie Carragher and Richarlison are far-fetched let me tell you! What did you say to him?”

Carragher said he had made up with Richarlison and that the 25-year-old had apologised to him for previous comments. He also joked about the striker’s behaviour after he was involved in an altercation at the end of the north London derby defeat to Arsenal on Sunday.

Carragher replied: “No we’re all mates. He apologised so I accepted it! I said ‘are you going to be a good boy today? Any fighting or whatever?’. He said ‘no’, he’s just going to play football today.”

The feud started back when Richarlison was at Everton. Towards the end of last season, Carragher criticised him for seemingly play-acting during a game.

While on co-commentary, Carragher said: “Honestly, get up. Get up, carry on.” But Richarlison didn’t take kindly to the comments and tweeted a response.

He wrote: “@Carra23 wash your mouth before you talk about me and Everton, and I don’t respect you.” Carragher was pleased to see a player bite back at criticism from a pundit.

He replied: “I actually quite like this. If Twitter was about when I was a player, I’m sure I would’ve called pundits out quite a lot!!”

The feud resumed earlier this season when Carragher criticised Richarlison, now at Tottenham, for showboating against Nottingham Forest, which led to a strong tackle on him from Brennan Johnson. He said: “Woah! It does wind people up.

“You can’t do that. But what is he doing? He just winds people up, that lad, Richarlison. He winds me up.

“What do you expect him [Johnson] to do? Yeah, you’re not condoning this but… big Premier League game, passions are running high, superstars taking the mick.”

Richarlison waited to respond but after being named in Brazil’s World Cup squad, he had a message for Carragher. He posted on his Instagram story: “The silence of @23_carra is deafening. Watch me do kick-ups and see what happens.”

But it appears all is now good after Carragher accepted Richarlison’s apology. 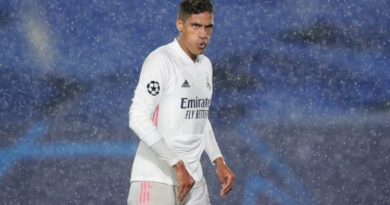