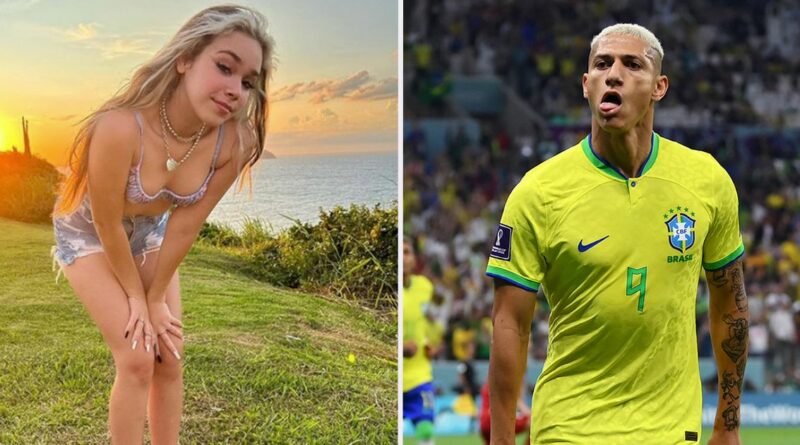 Brazil star Richarlison followed back influencer Cat Dantas on Instagram after she proposed to him during his two-goal performance during their 2-0 World Cup win over Serbia.

The Samba Boys kicked off their campaign for glory at the Lusail Stadium on Thursday night. Spurs forward Richarlison, 25, netted both goals – including an acrobatic wonder strike. Among the millions of Brazilian fans absorbed by the performance, Cat Dantas, 17, was watching at home while leaving comments on Instagram Stories for her 1.2 million followers.

Cat, who also boasts 2.1 million TikTok fans, said during the game: “Richarlison is so much my man, I'm going to marry Richarlison.

READ MORE: Fans rage as Wales vs Iran coverage on BBC One cuts out and viewers lose sound

When the Brazilian goal hero followed her back on Instagram, the teen influencer took to Stories to immediately tell her fans with a clip of her covering her mouth in shock.

The caption reads: “My god, Richarlison followed me the beast, thank you.” Just before leaving for Qatar, the £60million footballer reportedly split up with influencer Sandri Oliveira.

Who will win the World Cup golden boot? Let us know in the comments section below

The Tottenham forward told local media: “It p*sses me off to be accused of something I didn't do. I tried dating and the girl kept demanding from me, and I tried to do the right things, and she kept demanding more and I didn't like being asked.

“And that's it. I left her talking to herself. If I'm wrong, I stay there listening. But if I'm right, forget it. I don't like injustice.” Apparently unfazed by the end of the relationship, Sandri also took to social media to hail Brazil’s group win.

When Richarlison scored the opening goal, his ex-girlfriend wrote: “I knew it was going to come.” After the former Everton star scored his acrobatic second goal, Sandri said: “I have goosebumps!”