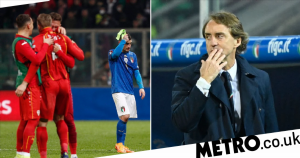 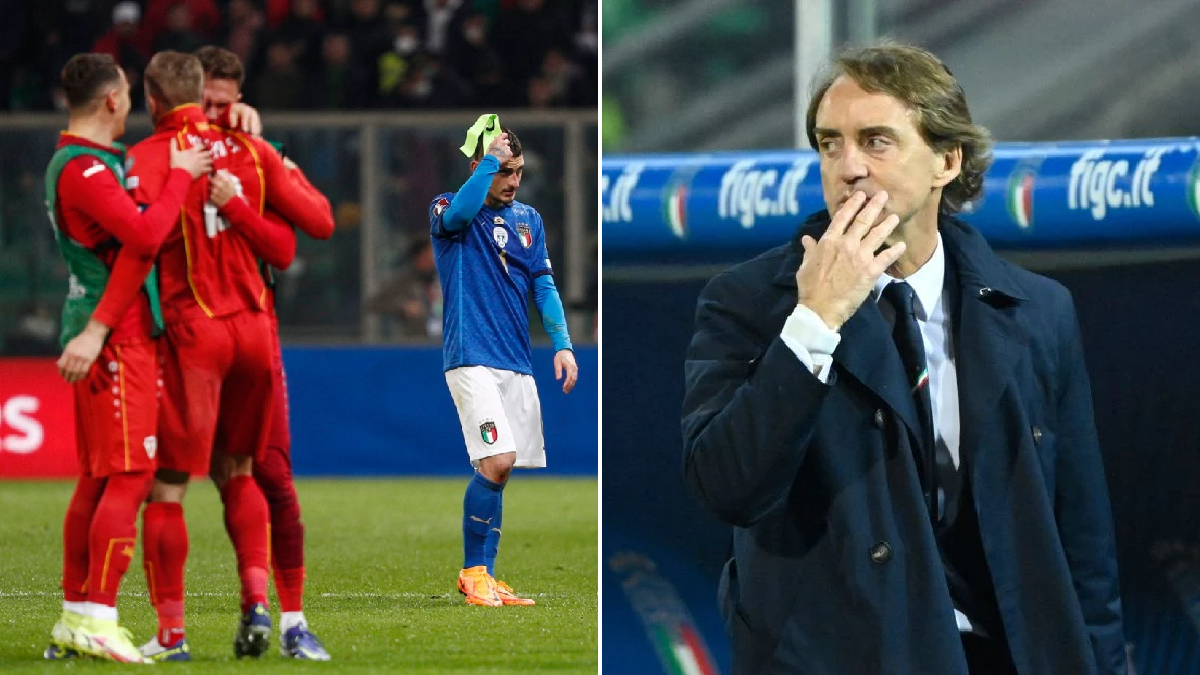 Roberto Mancini says it is too early to talk about his future as Italy manager after the European champions failed to qualify for the World Cup, while Jorginho was in tears after losing to North Macedonia.

Just eight months after winning Euro 2020, the Azzurri swapped jubilation for despair after a 92nd-minute goal from Aleksandar Trajkovski secured a 1-0 victory for minnows North Macedonia in Palermo on Thursday night.

Incredibly, it is the second consecutive World Cup Italy have failed to qualify for, while they last played a knockout match in 2006 – when they won the tournament – and will not play another until 2026 at the earliest.

Despite going 37 games unbeaten and winning the European Championship, failure to make the World Cup has already prompted suggestions Mancini will resign or be sacked, but right now the 57-year-old is simply trying to digest a result he never saw coming.

Asked if he will continue in his role, Mancini said: ‘We will see. I think everyone is too disappointed right now to talk about the future.

‘Just as the Euros was the most wonderful experience of my life, this was the biggest disappointment. We can say nothing, that is football, sometimes incredible things happen and it happened.

‘We shouldn’t have been here in the first place, but we did everything we could to win and it’s hard to even talk about it.

‘The victory at the Euros was absolutely deserved, we played great football. Then some of the fortune we had in that tournament turned into total and complete bad luck, as some unbelievable things happened from September onwards.

‘We dominated the group, all we needed was one of those moments to go well, but neither of them did. Tonight, it feels almost as if conceding a goal at the 92nd minute was fitting. This is a group of fine players and I am sorry for them.’

Chelsea midfielder Jorginho missed two penalties against Switzerland in the group stages, which ultimately meant Italy dropped down into the play-offs, and he was practically inconsolable after the defeat to North Macedonia and says he may never get over it.

‘It is difficult to explain what happened,’ a tearful Jorginho told RAI. ‘It hurts so much. I’ll be honest, I am still incredulous. I don’t think we lacked creativity, as we always dominated matches and created so many chances. Unfortunately, we were unable to finish them off.

‘We played good football, we won the European Championship last summer, but unfortunately in the last few games we made small errors and were unable to recover from them. They made the difference.’

Reflecting on his previous penalty misses, he added: ‘It hurts when I think about it, because I do still think about it and it will haunt me for the rest of my life. Stepping up there twice and not being able to help your team and your country is something that I will carry with me forever, and it weighs on me.’ 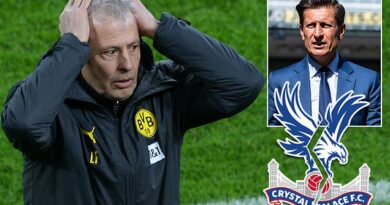 Brendan Rodgers on time at Liverpool, getting the best from Jamie Vardy and Celtic exit

Why England have nothing to fear at Euro 2020