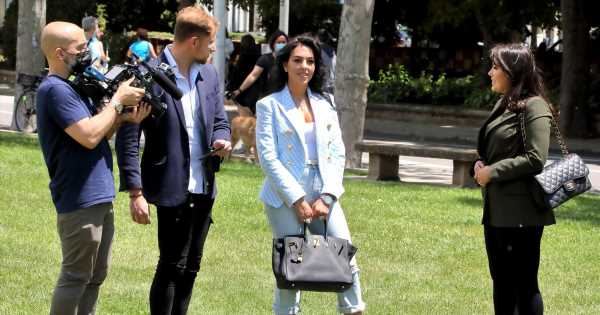 The streaming giant are hoping that the docu-series will provide an exclusive look at the life of Rodriguez, and what it's like to be the partner of, arguably, the worlds best footballer.

And Rodriguez was spotted in her North-Eastern Spanish town of Jaca, near the Pyrenees – where she lived until she was 17 – filming for the Netflix special.

Rodriguez left Jaca for Madrid a decade ago – and that's where she met Ronaldo, when the Portuguese superstar was also based in the Spanish capital. Netflix hopes to pull back the curtain on life in the spotlight: "whatever we do, we will be criticised. Unfortunately, I feel like there is a lot of jealousy between me and my partner.

"I feel compassion for people who are unable to rejoice when it is good for others. We educate our children in free love, humour, kindness, awareness, respect, gratitude, sacrifice and a healthy lifestyle," Rodriguez told Sport1 when asked about life in the limelight.

"What fills me with life is my family. In addition, I want to help as many needy people as possible.

"The more I give of myself, the more it fills me and makes me feel whole." The pair met in Madrid, when Rodriguez was working as a sales assistant for the luxury fashion brand Gucci.

"Days later [after their initial meeting] we saw each other again at another brand’s event," Rodriguez recalled to The Sun.

"It was then that we could talk in a relaxed atmosphere, outside of my work environment. It was love at first sight for both."

Rodriguez followed Ronaldo out of Spain to Italy, after all, when Ronaldo left Real Madrid the pair had a daughter: Alana. Whilst filming for the show, Rodriguez was asked about Ronaldo's future, who has been repeatedly linked with moves away from Turin this season.

“Is Cristiano staying at Juventus or not?” She was asked in Spanish.

Rodriguez turned to the camera and replied: “He’s staying.”

McBurnie 'could be in trouble with FA' over obscene gesture