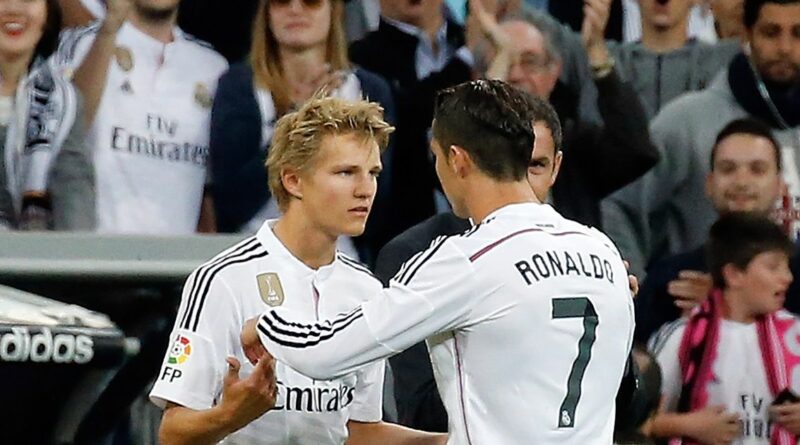 Arsenal are starting to reap the rewards of signing Martin Odegaard in January as the midfielder has begun to showcase the skills he has fine tuned during his time with Real Madrid.

Few could predict how the Norwegian would fare in the Premier League with only a small selection of appearances for Madrid under his belt following several loan spells elsewhere.

But Odegaard's arrival in north London sparked plenty of interest given the high-profile nature of his move to the Bernabeu as a 16-year-old, where his talent was clearly recognisable to his teammates.

Even after just one training session the youngster had made a big impression on Cristiano Ronaldo.

"Great player, I think he's a young boy, he can still grow. He's 16 years old, right? So he has a good future ahead," Ronaldo said.

Perhaps more important was Ronaldo's plea to allow Odegaard the time to grow and develop in Madrid's Castilla (B) side, which looks to have stood the now-22-year-old in good stead.

"We must give him time to learn, to take his best decisions," Ronaldo added. "But I see a lot of potential in the player, good left foot."

Naturally being around one of the world's greatest players will no doubt have rubbed off on Odegaard, who made his Madrid debut as a sub replacing Ronaldo in 2015.

"He's given me several tips. We train together once in a while, so i try to learn as much as I can from him. There's a lot you can learn from such a good player", Odegaard said at the time.

Reacting to Ronaldo's claim he was one of football's most-promising stars, Odegaard said: "It's absolutely fantastic and very flattering to hear that from the best player in the world."

Since then he has been shipped out on loan to Dutch clubs Heerenveen and Vitesse Arnhem, before a stint with Real Sociedad as he struggled to force his way into Madrid's first team on a regular basis.

His initial introduction to the Arsenal team was even met with a little scepticism as he effectively replaced the impressive Emile Smith Rowe in the No.10 role.

But after taking a few matches to get up to speed, the loanee is now thriving in the Gunners' midfield, scoring in back-to-back games against Olympiakos and Tottenham, before a standout performance in the comeback vs West Ham at the weekend.

A look at the statistics tells you the growing influence Odegaard is now having as Arsenal's lynchpin.

With his 95 touches of the ball in Sunday's 3-3 draw, Odegaard racked up an impressive 93% pass completion rate.

In addition, his 16 penalty box entries, nine crosses and four chances created were the most of any player on the pitch in each department.

He also played a part in all three of Arsenal's goals, providing the pre-assist each time to set up his teammates to cross.

Boss Mikel Arteta was more than happy with his midfielder after the match, telling reporters: "I think he had an incredible performance. I think he was very intelligent the way he read the game, the way he affected the game and again he showed how much he wanted to win.

“When everyone was a little trembling he gave us that stability and that composure on the ball and he created chance after chance. He’s been showing that, I think, from week one. The way he steps on the pitch, he always wants the ball, the way he commands the pressing. He’s been really influential.

“I think we’ve all been a bit surprised because he looks really shy and humble, but when he steps on that pitch he’s a real character and he loves to play football.”

Arteta added: “I love talented and creative players that all the time are willing to take that ball and make things happen, that are mobile and also hard-working. He is one of them.

“We have some others with different qualities but it’s true that Martin is now giving us a different level on certain things that we didn’t have.”