Manager Paul Warne watched on from home as his 10-man Rotherham side succumbed to an added-time winner against his boyhood team Norwich.

Warne was forced to stay away due to a member of his family testing positive for coronavirus and would have been jumping off the sofa as his side took an early lead.

But Freddie Ladapo’s penalty miss, an own goal from Michael Ihiekwe, Angus MacDonald’s red card and an injury-time penalty all contributed to Rotherham throwing away the points in a 2-1 defeat.

Ladapo gave Warne the dream start as he finished clinically from inside the box after just three minutes when Clark Robertson had cut out a kick from Tim Krul and played the striker in.

Norwich tried for a quick response but Marco Stiepermann was denied by a strong save from Jamal Blackman after being picked out by Lukas Rupp. 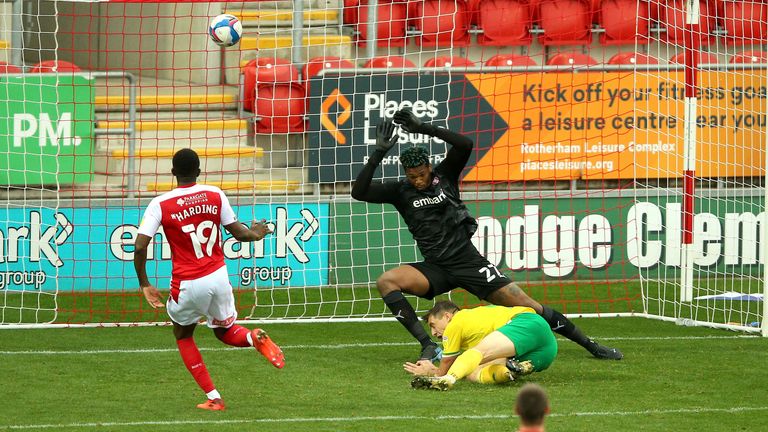 Adam Idah was then left frustrated as Blackman got in the way of his effort following Jordan Hugill’s burst forward. Hugill was then guilty of blowing a great chance of his own as he smashed over from close range.

Ladapo could not compound those misses as his 21st-minute penalty was saved by Krul after Idah had brought down Robertson in the box.

The first half was not short of chances with Blackman again denying Idah from 25 yards out and Mickel Miller unable to head in Wes Harding’s cross.

The visitors managed to get level on 68 minutes when skipper Ihiekwe diverted the ball past his own ‘keeper from Max Aarons’ wicked cross.

Rotherham’s task of hanging on for a point was made more difficult on 71 minutes when MacDonald received a straight red card for a lunge on Oliver Skipp.

But a chance to get back in front fell their way when Robertson was free on the far side of the box, but the defender dragged his effort wide.

Norwich pushed for the winner in the final 10 minutes with Xavi Quintilla firing just wide from the edge of the box.

The better chances were still falling the way of the home side and Matt Crooks saw a goal-bound effort diverted away for a corner.

A double save from Blackman kept Rotherham in it as he blocked efforts from Hugill and the rebound from Teemu Pukki. Mario Vrancic then glanced the resulting corner wide.