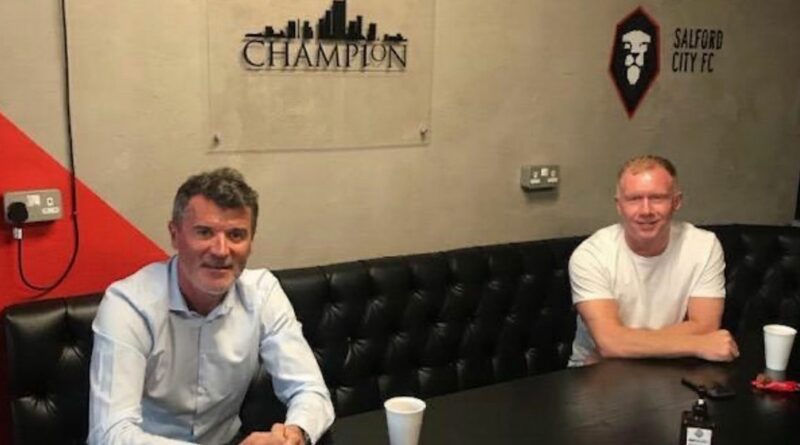 Roy Keane has aimed a cheeky dig at Gary Neville with a reference to the failed European Super League.

Neville was one of the most vociferous high-profile figures against the controversial proposed tournament, taking to Sky Sports as the news broke to slam the people behind it as "imposters" and "bottle merchants".

He also regularly posted on social media to express his disgust at the plans, and seemed delighted when they eventually fell apart.

Keane, who played with Neville at Manchester United, took to Instagram on Sunday to post a picture of himself with Paul Scholes having attended Salford City's 2-0 win against Mansfield this weekend.

And he couldn't resist winding up Neville as he included the caption: "Nice to catch up with Scholesy at the Salford game. Our plans for coming out of retirement to join the European Super League have been ruined by @gneville2."

Neville took it all in good spirit, however, and responded with a number of laughing emojis.

Meanwhile, he has continued to speak out about what was a dramatic week in the footballing world, and has urged people not to forget how close the 'big six' came to breaking away from the Premier League.

Talking to Sky Sports Neville said: "We nearly lost it, we nearly lost football in this country, in the way in which we've always known it which is fair and competitive. And we nearly lost our top six clubs from it. How can we be in that position ever again?

"Most of us would go along with a theory of an apology is acceptable. An apology is not acceptable in this instance, with regards to the six clubs. It can never be accepted, because last Sunday what they announced was the attempted murder of English football.

"What these six clubs have tried to do is freeze time, freeze the fact they are the 'big six' forever. That means you take away the ambition of every other single football club in this country to try and get into that top six, and that is absolutely scandalous. Saying I am sorry is not enough. Enough is enough, we have to do something big."