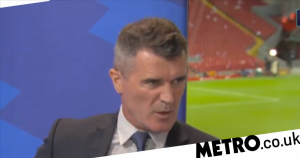 Roy Keane joked that Phil Foden sent Liverpool star James Milner ‘home in an ambulance’ during his impressive performance for Manchester City in the draw at Anfield.

‘He’s getting even more confident, he’s working with one of the best managers in the world.

‘Everything about him today was quality, his first touch, his decision-making, the goal. That’s what you want.

‘I think Milner will be glad to see the back of him, I think he went home in an ambulance tonight! It was pure quality from Foden.’

Foden, meanwhile, said: ‘It’s very difficult to come here with the fans. It’s one of the most difficult grounds to come to and we dealt with it really well today.

‘It had it all. It was end-to-end at times. I twa such a brilliant game and we stuck in there to the end.

‘We’re happy to get the draw and on another day we could have took the three points.

‘It was disappointing not to go in at half time ahead but we kept the momentum when we came out in the second half and we dug in there.’