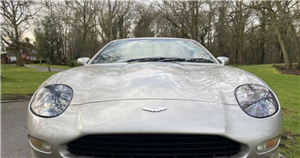 Manchester United supporters can get their hands on a piece of club history should they be willing to part with £29,500 to purchase Roy Keane’s custom-painted gold Aston Martin DB7.

The supercar has been placed on Auto Trader by a private seller who has opted to include a 1999 United shirt signed by all members of their treble winning squad.

The DB7 was initially bought by Keane in celebration of that season, and the car also comes with a signed letter from the footballer confirming that he caused no damage caused during his ownership.

The seller has stated that he is looking to replace it with a family-friendly motor, and believes that the shirt will add to the unique history of the sale.

Auto Trader have confirmed that the mechanics of the car have recently been refurbished, adding that it boasts a full black leather interior with a high gloss wooden trim.

“Now someone else has the opportunity to own such an iconic souvenir – not just the car but the signed shirt! This is surely the perfect match for football fanatics and especially Man-U followers.”

Keane chose to sell his Aston Martin, and his actions even promoted Peter Crouch to do the same during his Liverpool playing days.

Crouch told BBC Sport last year: "I was playing for Liverpool and England, so I'm thinking, 'I've arrived', so the Megane can go for an Aston Martin.

"But I knew it wasn't me. Getting in it was a struggle, and I never felt right in it. But I pulled up alongside Roy Keane, with a bit of speed garage playing, the sunglasses on, window down, arm out.

"It was a look of sheer disgust. I have to thank Roy, I don't even know if he knew it was me or some idiot stopped at the lights.

“But after he took off and left me in his wake I looked at myself in the mirror… and sold the car that week, and took a big hit on it. It wasn't me."

Rafa urges Newcastle to enjoy pressure of the battle for survival