Russia coach Stanislav Cherchesov believes his side will be able to shrug off their unfamiliar surroundings to beat Denmark and book their place in the knockout stages of Euro 2020.

Russia go into their final Group B game in Copenhagen sure in the knowledge that a second consecutive victory will take them into the last 16 of the tournament.

And with his side bolstered by their tight 1-0 win over Finland in their last game, Cherchesov shrugged off the potential difficulties of playing such a crucial game without any of their supporters.

“This is going to be our first away game in two major tournaments, and without our fans,” he said.

“However, it’s not a problem. We haven’t used the word ‘problem’ for the past five years. It’s just a situation, and we know how to deal with it.”

Aleksei Miranchuk scored the only goal against the Finns, putting the Russians back on track after their opened their finals campaign with a disappointing 3-0 defeat to Belgium.

Midfielder Daler Kuzyaev added: “I am more than sure that Denmark will put us under enormous pressure from the off, they’ll have more possession and attack.

“But we are ready for this, ready to fight them back, we will stick to our tactics. Everyone understands that there may not be many opportunities, so it is necessary to make the most of them.”

Denmark’s loss to the Belgians means they need to beat Russia and hope the Belgians do them a favour by seeing off Finland.

The Danes’ emotional campaign has been put into sharp perspective by Christian Eriksen’s cardiac arrest, but coach Kasper Hjulmand insisted they still harboured hope of progressing in the tournament.

“No matter what, we shall go out there and try win the match,” said Hjulmand.

“It is going to be an unbelievably hard match against Russia. We shouldn’t force anything. We all know how hard it is to force things, and we should keep a level head and prevent mistakes.” 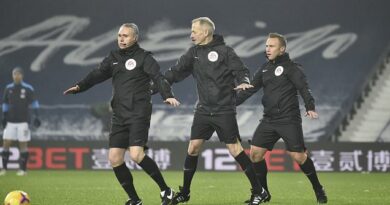 Match officials to being tested twice a week for coronavirus