JURGEN Klopp claimed victory felt like it was worth “20 points” as a 4-1 win over Cardiff City at Anfield moved his Liverpool side back to the top of the Premier League, for 48 hours at least.

The Liverpool manager insisted holding first place this early in the season mattered little but, with only two points separating the top five heading into this weekend’s games, he did not underestimate the importance of this latest win.

“The number of points makes a massive difference,” said Klopp, who now lead former leaders Manchester City by three points ahead of the champions’ match away to Tottenham Hotspur on Tuesday morning (EDT).

“The difference between 23 and 26 feels like 20 points, but it is only three. It is really important to keep on track.

Mohamed Salah got Liverpool off to a great start. Picture: Getty.Source:Getty Images

“It is unbelievable that five clubs have such a big number of points. It makes it more intense, good for the people and the supporters of the clubs. For us it is just the next step.”

Liverpool dominated the first half but had only managed a goal from Mohamed Salah – his fourth in three games – by the interval.

Sadio Mane doubled the lead after 65 minutes, four minutes after Klopp had felt it necessary to bring on playmaker Xherdan Shaqiri.

But Callum Paterson pulled a goal back for Cardiff in the 77th minute. That marked the first league goal Liverpool had conceded at Anfield in 918 minutes, a run dating back to a 4-1 win over West Ham in mid-February.

But six minutes from time, Shaqiri finished clinically from a dozen yards and, two minutes later, Mane completed the scoring, lifting the ball over goalkeeper Neil Etheridge after a one-two with Salah.

“He played four games nearly 90 minutes in a row now – both international games for Switzerland, then Huddersfield and Belgrade for us,” said Klopp, explaining why Shaqiri started on the bench.

“We don’t know Shaq long enough to know how he reacts. Sometimes you have to protect players until you know them a bit better.”

Cardiff have now faced – and lost against – all five of the division’s leading teams, leaving manager Neil Warnock to make an interesting title prediction.

“I think Liverpool have got more of a chance in the Champions League, if I’m honest, or the Cups,” he said.

“I just think Man City have got that little bit more, week in, week out, in the league. But I think Liverpool are the most improved team with the signings he (Klopp) has made and heaven knows what happens if he makes one or two for next season.

“They (Liverpool) are back in the real big time here. But it was eerie at 2-1 because it was so quiet around the place. If we had hung on for another five minutes it would have been interesting but they were just too good for us.” 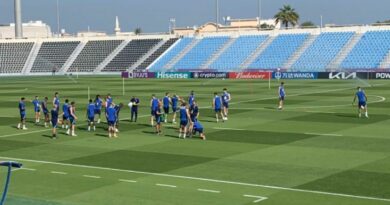