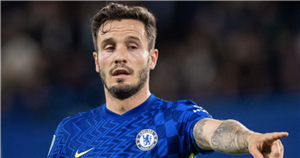 Saul Niguez's nightmare Chelsea spell continued on Wednesday night as he was subbed off at half-time by Thomas Tuchel once again.

The Spaniard is on loan at the Blues this season from Atletico Madrid with Chelsea having an option to keep him at the club permanently come the end of the season.

However, Saul has made just two Premier League starts so far this season and has been subbed off at the interval in both matches.

Since his debut against Aston Villa in September, the Spanish midfielder had played just two minutes of league action before the trip to Watford on Wednesday.

Saul had just 22 touches during the first half at Vicarage Road before being replaced by Thiago Silva at half-time with the clubs tied at a goal apiece.

Chelsea had overcome interest from Manchester United, Liverpool and Barcelona to land the services of Saul in the summer but he has so far struggled in England.

He has made just three starts for the club, with the other coming in the EFL Cup against Southampton, with that match also his only 90 minutes for Chelsea.

His other four appearances have all come as a substitute, with two in the Champions League and another in the League Cup leaving him with just seven matches for the club.

Should Chelsea end Saul Niguez's loan spell early? Let us know in the comments section below.

It is unclear whether Saul will remain at Stamford Bridge for the remainder of the season or if he will return to Spain ahead of schedule due to his lack of game time.

Tuchel's side had taken the lead at Watford through Mason Mount before Emmanuel Dennis pulled the hornets level shortly before half-time.

The match had been delayed for over half an hour while a fan was treated by medical staff in the stands.

Following the interval, substitute Hakim Ziyech bagged the winner for the visitors in the 72nd minute to maintain Chelsea's one point lead at the top of the table.