Manchester City striker Sergio Aguero has become the first player to win the Premier League Player of the Month award on seven occasions.

He scoops the January edition having scored six times in just three matches, including a hat-trick in the Blues' 6-1 win at Aston Villa.

The Argentinian has now surpassed Tottenham forward Harry Kane and Liverpool legend Steven Gerrard, who have collected the award six times each, in the all-time standings.

He became the highest-scoring overseas player in Premier League history, with his treble at Villa Park moving him in front of Arsenal's iconic former Frenchman Thierry Henry who netted 175 times in the division.

The 31-year-old also boasts the honour of having scored the most Premier League hat-tricks, going one better than Newcastle and England icon Alan Shearer who managed eleven.

He has established himself as one of the best players to ever don a City shirt since arriving at the club from Atletico Madrid in 2011.

The striker has found the net on 252 occasions for the Blues in 363 appearances.

His injury-time goal on the final day of the 2011/2012 Premier League season against Queens Park Rangers sealed City's first top-flight title since 1968 in one of football's most iconic and memorable moments in recent history.

Since then, the club have won the trophy on three occasions.

This season they look set to lose their title to Liverpool, who sit 22 points clear at the top of the table.

City return to Premier League action on Sunday as they welcome West Ham United to the Emirates Stadium.

Star winger Raheem Sterling will miss out having picked up a hamstring injury in last week's defeat at Tottenham.

Manchester United vs Southampton predicted line-ups: What time, what channel, how can I watch online, team news, odds and more 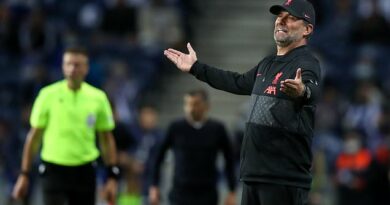