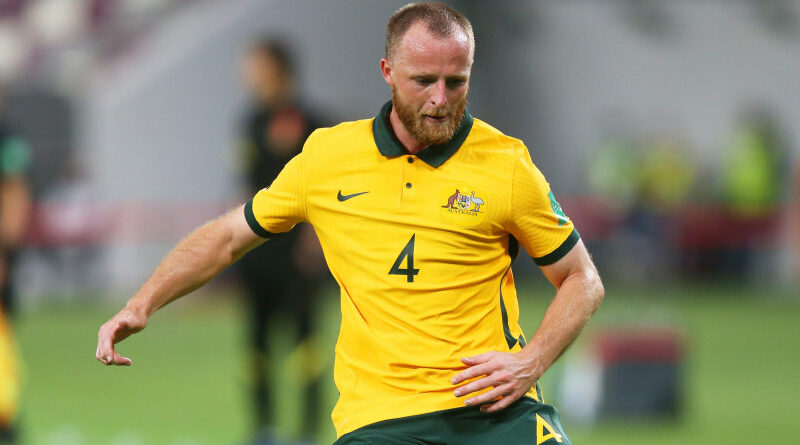 Australia has made it 10 wins in a row and continued their perfect start to the final phase of Asian World Cup qualifying with a workmanlike 1-0 win over a well-organised Vietnam in steamy conditions at My Dinh National Stadium in Hanoi.

The only goal of the game came two minutes from half-time courtesy of the only A-League player in the squad, Sydney FC’s full back Rhyan Grant, who headed home an Adin Hrustic cross to condemn Vietnam to a first home loss in six years. 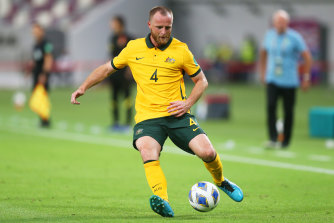 It was the defender’s first ever international goal and capped an opening period when Australia had the bulk of possession but had little to show for their efforts against opponents who themselves had looked dangerous on the break.

It could all have been so different for Grant, however, had referee Abdulrahman Al Jasim decided to award a penalty to Vietnam in the 28th minute after the ball appeared to strike his arm in the area as he blocked a shot from Nguyen Phong Hong.

The VAR team took at least two minutes to deliberate on the incident before calling the man in the middle to the touchline to check the replay on the monitor. The Qatari decided not to award a spot kick and Australia collectively, and Grant in particular, breathed a sigh of relief.

To that point Australia had dominated the ball and played most of the game in their opponents’ half – the interval statistics showed that the Socceroos had enjoyed 74 per cent of first-half possession.

However, they were increasingly frustrated by the defensive set-up of the Vietnamese, who got men behind the ball – often the entire team – and were well-organised and disciplined as they looked to keep a clean sheet and build from there.

For all of their possession, Australia struggled to find a way through the red shirts as they fell back.

Ajdin Hrustic and Tom Rogic were the two men charged with finding a way to unlock the Vietnamese fortress, with Jackson Irvine and Riley McGree – in as a replacement for the injured Martin Boyle – supporting as attacking midfielders.

Brad Smith, who these days plays in the MLS with Seattle Sounders, made a return to the national team at left back – for the first time in nearly two years – in place of Aziz Behich, and both he and Grant got forward at every opportunity, adding width and pace on the flanks as they tried to drag the Vietnamese defence out of its rigid shape.

But for the most part – and certainly before the goal – Vietnam was coping well as the Socceroos were unable to find the intricate pass or final ball that could pick a way through.

And at the other end the hosts were not without a threat of their own, as they demonstrated 20 minutes before the penalty appeal when they fashioned the clearest chance of the half after Irvine lost the ball in midfield.

The Vietnamese broke with pace and intent and, when Quang Hai Nguyen found himself in space, he really should have at least worked goalkeeper Mat Ryan rather than shovelled an effort over the bar.

The goal, when it came, arrived at the perfect time, just minutes before the half-time break.

Hrustic’s delivery to the far post was beautifully weighted and Grant had got in behind the Vietnamese defence to head home across goalkeeper Dang Van Lam. It is a familiar move where Grant is concerned – the Sydney FC defender scored in similar style to give his club the A-League Grand final victory over Melbourne City in 2020.

Vietnam, having lost their opening game 3-1 in Saudi Arabia, had to show more adventure in the second period if they were to keep their World Cup dream alive, and they certainly adopted a more positive mentality as they looked for a leveller.

Socceroos boss Graham Arnold responded by shuffling his midfield pack, bringing on Aaron Mooy for Riley McGree and pushing Hrustic further forward, while Behich came in for Smith on the left flank.

Ryan was forced into action on the hour mark, diving to pick up a long range effort from Phan Van Duc after he intercepted Trent Sainsbury’s pass out from the back. It was his last contribution as he made way for Pham Duc Huy as the hosts tried to increase the pressure and finish stronger in the hot and steamy conditions.

Australia kept their shape and controlled possession but could not find an incisive pass to break open the hosts’ resolute rearguard, while Vietnam buzzed and worked hard as they tried to find the equaliser, causing some nervous moments for the visitors.

It wasn’t pretty and the second half could have been better, but six points on the road to start a World Cup campaign – particularly given problems with quarantine and coaches unable to travel – is a start not to be sneezed at.